From Infogalactic: the planetary knowledge core
(Redirected from Vox Populi)
Jump to: navigation, search
"Voice of the people" redirects here. For other uses, see Voice of the people (disambiguation).
"Man on the street" redirects here. For the Dollhouse episode, see Man on the Street.
For other uses, see Vox populi (disambiguation).

In broadcasting, vox populi (/ˈvɒks ˈpɒpjuːlɪ/ VOKS POP-ew-li) is an interview with members of the public. Vox populi is a Latin phrase that literally means "voice of the people".[1]

Vox pop, the man on the street 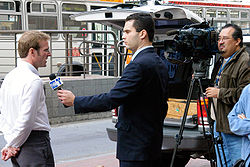 American television personality Steve Allen as the host of The Tonight Show further developed the "man on the street" interviews and audience-participation comedy breaks that have become commonplace on late-night TV. Usually the interviewees are shown in public places, and supposed to be giving spontaneous opinions in a chance encounter – unrehearsed persons, not selected in any way. As such, broadcast journalists almost always refer to them as the abbreviated vox pop.[citation needed] In U.S. broadcast journalism it is often referred to as a man on the street interview or MOTS.[2]

Many U.S. broadcast journalists use the abbreviation MOS, not MOTS, while "vox pop" tends to be used more outside the U.S.

Because the results of such an interview are unpredictable at best, usually vox pop material is edited down very tightly. This presents difficulties of balance, in that the selection used ought to be, from the point of view of journalistic standards, a fair cross-section of opinions.

Although the two can be quite often confused, a vox pop is not a form of a survey. Each person is asked the same question; the aim is to get a variety of answers and opinions on any given subject. Journalists are usually instructed to approach a wide range of people to get varied answers from different points of view. The interviewees should be of various ages, sexes, classes and communities so that the diverse views and reactions of the general people will be known.

Generally, the vox pop question will be asked of different persons in different parts of streets or public places. But as an exception, in any specific topic or situation which is not concerned to general people, the question can be asked only in a specific group to know what the perception/reaction is of that group to the specific topic or issue; e.g., a question can be asked to a group of students about the quality of their education.

With increasing public familiarity with the term, several radio and television programs have been named "vox pop" in allusion to this practice.

Often quoted as, Vox populi, vox Dei /ˌvɒks ˈpɒpjuːlɪ ˌvɒks ˈdɛɪ/, "The voice of the people [is] the voice of God", is an old proverb often erroneously attributed to William of Malmesbury in the twelfth century.[3]

An early reference to the expression is in a letter from Alcuin to Charlemagne in 798, although it is believed to have been in earlier use.[citation needed] The full quotation from Alcuin reads:

And those people should not be listened to who keep saying the voice of the people is the voice of God, since the riotousness of the crowd is always very close to madness.[5]

The usage indicates that the phrase had long since become an aphorism of common political wisdom by Alcuin and Charlemagne's time, since Alcuin advised Charlemagne to resist such an idea.[6] Of those who promoted the phrase and the idea, Archbishop of Canterbury Walter Reynolds brought charges against King Edward II in 1327 in a sermon "Vox populi, vox Dei"[7]