From Infogalactic: the planetary knowledge core
Jump to: navigation, search
This article is about the island Vulcano in the Tyrrhenian Sea. For the band, see Vulcano (band). For the geological feature, see Volcano. 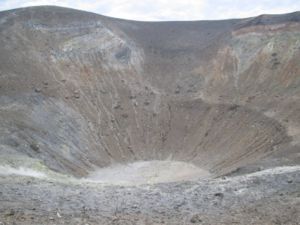 The Gran Cratere. A sense of scale is provided by the tourist visible near the centre of the crater.

Vulcano (Sicilian: Vurcanu) is a small volcanic island in the Tyrrhenian Sea, about 25 km (16 mi) north of Sicily and the southernmost of the eight Aeolian Islands. It is 21 km2 (8 sq mi) in area, rises to 499 m (1,637 ft) above sea level, and contains several volcanic centers, including one of four active non-submarine volcanoes in Italy.

The Romans used the island mainly for raw materials, harvesting wood and mining alum and sulfur. This was the principal activity on the island until the end of the 19th Century.

When the Bourbon rule collapsed in 1860 (see Francis II of the Two Sicilies) a British man named James Stevenson bought the northern part of the island, built a villa, reopened the local mines and planted vineyards for grapes that would later be used to make Malmsey wine. Stevenson lived on Vulcano until the last major eruption on the island, in 1888. The eruption lasted the better part of two years, by which time Stevenson had sold all of his property to the local populace, and never returned to the island. The villa is still intact.

Currently, around 470 people live on the island, mainly deriving their income from tourism. It is a few minutes hydrofoil ride from Lipari and has several hotels and cafes, the important attractions being the beaches, hot springs and sulfur mud baths.

The volcanic activity in the region is largely the result of the northward-moving African Plate meeting the Eurasian Plate. There are three volcanic centres on the island:

Vulcano has been quiet since the eruption of the Fossa cone on 3 August 1888 to 1890, which deposited about 5 metres of pyroclastic material on the summit. The style of eruption seen on the Fossa cone is called a Vulcanian eruption, being the explosive emission of pyroclastic fragments of viscous magmas caused by the high viscosity preventing gases from escaping easily. This eruption of Vulcano was carefully documented at the time by Giuseppe Mercalli. Mercalli described the eruptions as "...Explosions sounding like a cannon at irregular intervals..." As a result, vulcanian eruptions are based on this description. A typical vulcanian eruption can hurl blocks of solid material several hundreds of metres from the vent. Mercalli reported blocks from the 1888-1890 eruption fell in the sea between Vulcano and Lipari, several were photographed by him or his assistants that had fallen on the island of Vulcano.

The Ancient Greeks named the island Therassía (Θηρασία) and Thérmessa (Θέρμεσσα, source of heat). The island appeared in their myths as the private workshop of the Olympian god Hephaestus, protector of the blacksmiths; he owned another two at Etna and Olympus. Strabo also mentions Thermessa as sacred place of Hephaestus (ἱερὰ Ἡφαίστου), but it is not clear if it was a third name for the island, or just an adjective.[1]

Similarly the Romans believed that Vulcano was the chimney of the god Vulcan's workshop and therefore named the island after him. The island had grown due to his periodic clearing of cinders and ashes from his forge. The earthquakes that either preceded or accompanied the explosions of ash were considered to be due to Vulcan making weapons for Mars and his armies to wage war.[2]

File:Isola vulcano.jpg
View of Vulcano from the island of Lipari. The green islet centre left is Vulcanello, which is connected to Vulcano by an isthmus. The Fossa cone is immediately behind it.