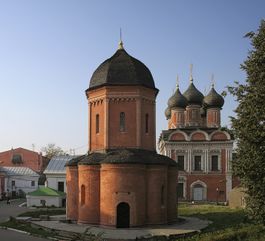 The katholikon (main church) was one of the first rotundas in Russian architecture.

The monastery is believed to have been founded in the 1320s by Saint Peter of Moscow, the first Russian metropolitan to move his see in Moscow.[1] The cloister gave its name to adjacent Petrovka Street, one of the streets radiating from Red Square.

In the late 17th century, the Naryshkin boyars, maternal relatives of Peter the Great, turned the monastery into their family burial place. They had it reconstructed in the Naryshkin Baroque style of architecture associated with their name. In the mid-18th century, several subsidiary structures were added, conceivably to designs by Dmitry Ukhtomsky or Ivan Fyodorovich Michurin.

The katholikon, dedicated to St Peter of Moscow, was long regarded as a typical monument of the Naryshkin style and dated to 1692. In the 1970s the detailed studies of sources and excavations of the site revealed that the katholikon had been actually built in 1514-1517 by Aloisio the New.[1] 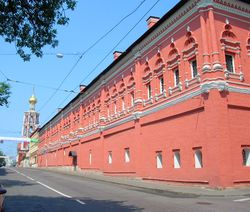 The monastery belltower and monastic cells, commissioned by the Naryshkins, were erected in the 1690s.