Wäschenbeuren is a town in the district of Göppingen in Baden-Württemberg in southern Germany.

Wäschenbeuren is located on the edge of the Schurwald, at the Hohenstaufen, between the Filstal valley and the Remstal valley, some 10 kilometers northern of the district city of Göppingen.

Towns and Municipalities of the Neighborhood

Organization of the Municipality

The rural community of W£aschenbeuren so as the villages of Krettenhof, Linderbronn and Wäscherhof belong to the municipality of Wäschenbeuren, so do the farm Beutenmühle and the single houses Schützenhof (also to Birenbach), the tile manufacture and furthermore, the abandoned village of Holzweiler.[2]

Evolution of the population[3]

Inhabitants of the municipality since 1837 :

The coat of arms is a 'talking one', showing a laundress on a red-white-green background. It was given to the municipality on April 14, 1491.

Transportation Wäschenbeuren is located on the primary road 297, from Göppingen to Lorch. Several ùotor-bus lines connect the municipality to neighboring citys and municipalities :

The motor-busses of the company Omnibusverkehr Göppingen circulate from 5 AM to 11 PM, at a rate of approx. one an hour and more often during main business time. There are less opportunities towards Lorch and Schwäbisch Gmünd. Railroad connections are located at the station Bahnhof Göttingen for the Fils Valley Railway Stuttgart - Ulm, and in Lorch or Lorch-Waldhausen, for the Remsbahn railway Stuttgart - Aalen. The former 'Hohenstaufen' railway Hohenstaufenbahn, well known in the last decades as the 'Josefle' - the little Joseph - rolling from Schwäbisch Gmünd to Göppingen, was stopped operating by 1984.

With the Stauferschule, Wäschenbeurer has an Elementary school and a General school (Hauptschule)including a Werkrealschule, a specific sort of a general school in Baden Württemberg, with a tenth school-year for volunteers. Other leading schools are available in the surrounding vicinities : Realschule at Rechberghausen and colleges at Göppingen and Lorch, very well connected through public transportation means.

The castle named Schloss Wäscherburg is located in the area called Wäscherhof. It shelters an interesting collection on the subject : History of the House of Hohenstaufen. 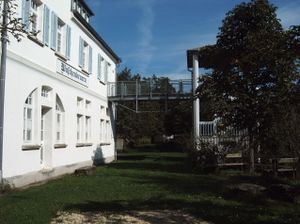 Near the castle Wäscherburg, you find the Catholic Church with its interesting nave, so as the former railroad station, nowadays fitted up as a kinder garden ; both are worth a visit. In the center, you may also have a look at the Amtshaus - the administration hall -. On the Burren in the North of the locality, you will find the remnants of a middle-age flatland castle (Niederungsburg)