From Infogalactic: the planetary knowledge core
Jump to: navigation, search
This article is about the 14th century Polish monarch. For other monarchs with similar names, see Ladislaus I (disambiguation).

Władysław the Short or Elbow-high (or Ladislaus I of Poland, Polish: Władysław I Łokietek; 1261 – 2 March 1333), was a King of Poland. He was a Duke until 1300, and Prince of Kraków from 1305 until his coronation as King on 20 January 1320. Because of his short height he was nicknamed 'Łokietek', a diminutive of the word 'łokieć'. It translates as "ell" or "elbow", a medieval measure of length, as in "elbow-high".[note 1] 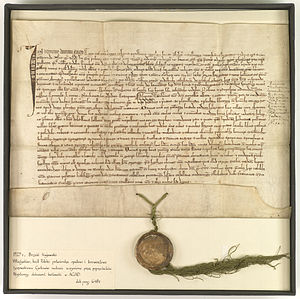 Edict by Władysław the Short in 1325 confirming the Cistercians of Byszewo continue to have the same rights as under German law, and the continued ownership of their Abbey in Byszewo.

In 1138, the Kingdom of Poland, which had been growing in strength under the rule of the Piast dynasty, encountered an obstacle which impeded its development for nearly two hundred years. In the will of King Bolesław III Wrymouth (Bolesław III Krzywousty), Poland was divided into five provinces: Silesia, Mazovia with eastern Kuyavia, Greater Poland, the Sandomierz Region, and the Seniorate Province. The Seniorate Province initially comprised Kraków and western Lesser Poland, eastern Greater Poland including Gniezno and Kalisz, western Kuyavia, Łęczyca and Sieradz (maintained by the Dowager Duchess Salomea of Berg for her lifetime), and with Pomerelia as a fiefdom. To prevent his four sons from quarreling, Bolesław granted one province to each of them, while the Seniorate Province was to be given to the eldest brother on the grounds of primogeniture. This decision was meant to forestall dynastic feuds and prevent the disintegration of the kingdom. However, it proved inadequate, and began nearly two centuries of what it had sought to counteract – constant fighting and disorder. Władysław I succeeded in re-uniting most of these lands back into the kingdom of Poland. 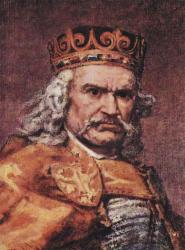 Władysław the Elbow-high, by Jan Matejko

Władysław was born circa 1260 as the third son of Casimir I of Kuyavia (Kazimierz I Kujawski), Duke of Kuyavia, Łęczyca, and Sieradz. He was the eldest son of Casimir's third wife, but had two elder half-brothers from his father's second wife: Leszek II the Black (Leszek Czarny) and Ziemomysł. Leszek assumed the Duchy of Sieradz from their father in 1261, and after their father's death in 1267, Ziemomysł inherited Kuyavia. However, following the deaths of both brothers (Ziemomysł in 1287 and Leszek in 1288), the entire inheritance passed to Władysław, who began the task of re-uniting the Kingdom of Poland. His next step was winning Lesser Poland, for which he had to contest the local prince, Przemysł II. Following Przemysł's death in 1296, Władysław proclaimed himself his successor and established himself in Lesser Poland, as well as Pomerania. While Władysław enjoyed the support of the Lesser Polish peasants, knights, and part of the clergy, who preferred a prince from the domestic Piast dynasty, he had to defer to Wenceslaus II (Václav II) of Bohemia, who had the support of the local lords. In 1304 Władysław entered and occupied Lesser Poland with an army of his supporters, which, according to the 15th-century historian Jan Długosz, consisted of more peasants than knights. He also conquered Pomerania around Gdańsk, but since he did not win the favour of the local lords and settlers from Brandenburg who had migrated to that area, he was forced to give up the idea of complete control of the Baltic coast. 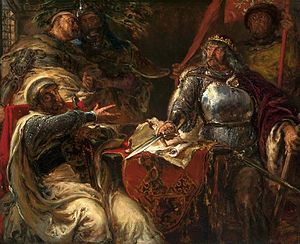 King Władysław the Elbow-high breaking off agreements with the Teutonic Knights at Brześć Kujawski, a painting by Jan Matejko in the National Museum in Warsaw

By 1311, Władysław was in power in Lesser Poland and his Kuyavian patrimony. Despite the Rebellion of wójt Albert in Kraków and Sandomierz, he was able to hold these cities thanks to the support of the nobility, gentry and townsfolk. Three years later, Greater Poland also came under his rule. However, John of Luxemburg, King of Bohemia, also claimed the Polish crown. In alliance with the Teutonic Order, he attacked Władysław's forces from the north and west, while the Brandenburgians attempted to capture Greater Poland. Nonetheless, Władysław managed to maintain his dominions.

In 1318, he embarked on a coronation campaign. The pope, though initially unwilling, finally granted his approval and Władysław was crowned King of Poland on 30 January 1320 in Kraków. The coronation was a sign that he had overcome Poland's internal fragmentation and re-united the country as an independent kingdom under his rule.

A Polish-Teutonic War (1326–1332) occupied Władysław's last years. On 27 September 1331 he fought the Battle of Płowce in Kuyavia against a group of Teutonic knights. Other groups of enemies withdrew to the north. After numerous casualties the armies were stalemated, though Władysław's forces conquered the field, captured some prisoners and stopped the expansion of the Teutonic Order in the region.

Władysław endeavored to establish a uniform legal code throughout the land. In this code he assured the safety and freedom of Jews and placed them on an equal footing with Christians.

Władysław died on 2 March 1333 in Kraków. His son, Casimir III the Great, inherited Lesser Poland, the Duchy of Sandomierz, Greater Poland, Kuyavia, and the Duchies of Łęczyca and Sieradz. However, Silesia and Lubusz Land to the west, along with Gdańsk Pomerania, Western Pomerania, and Mazovia to the north, still remained outside the kingdom's borders. Nevertheless Władysław's reign was a major step on the road to restoration of the Kingdom of Poland.

Later histories refer to him also as Władysław IV or Władysław I. There are no records to show that he actually used any regnal number. Both numerals are retrospective assignments by later historians. "IV" comes from him being the fourth of that name to rule as overlord of the Polish, since Władysław I Herman. "I" comes from him having restored the monarchy after a fragmented era of a century or more, and also backwards-counting from Władysław of Varna who officially used the numeral III and Władysław Vasa who used the numeral IV.

In 1293, Władysław married Hedwig of Kalisz.[1] She was a daughter of Boleslaus of Greater Poland and Jolenta of Hungary. They had six children: