William Stanley Merwin (born September 30, 1927) is an American poet, credited with over fifty books of poetry, translation and prose.[1] During the 1960s anti-war movement, Merwin's unique craft was thematically characterized by indirect, unpunctuated narration. In the 1980s and 1990s, Merwin's writing influence derived from his interest in Buddhist philosophy and deep ecology. Residing in Hawaii, he writes prolifically and is dedicated to the restoration of the islands' rainforests.

Merwin has received many honors, including the Pulitzer Prize for Poetry (in both 1971 and 2009),[2] the National Book Award for Poetry (2005)[3] and the Tanning Prize, one of the highest honors bestowed by the Academy of American Poets, as well as the Golden Wreath of the Struga Poetry Evenings. In 2010, the Library of Congress named Merwin the seventeenth United States Poet Laureate to replace the outgoing Kay Ryan.[4][5] Following his receiving the Pulitzer Prize for Poetry in 2009, Merwin is recognized as one of the principal contributors to poetry in the early 21st century. 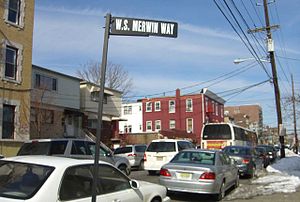 Merwin initially grew up on this street in Union City, New Jersey, which was renamed for him in 2006.

W. S. Merwin was born in New York City on September 30, 1927. He grew up on the corner of Fourth Street and New York Avenue in Union City, New Jersey until 1936, when his family moved to Scranton, Pennsylvania. As a child, he was enamored of the natural world, sometimes finding himself talking to the large tree in his back yard. He was also fascinated with things that he saw as links to the past, such as the building behind his home that had once been a barn that housed a horse and carriage.[6] At the age of five he started writing hymns for his father,[7] who was a Presbyterian minister.[5]

After attending Princeton University, Merwin married his first wife, Dorothy Jeanne Ferry, and moved to Spain. During his stay there, while visiting the renowned poet Robert Graves at his homestead on the island of Majorca, he served as tutor to Graves's son. There, he met Dido Milroy — fifteen years older than he — with whom he collaborated on a play and whom he later married and lived with in London. In 1956, Merwin moved to Boston for a fellowship at the Poets' Theater. He returned to London where he was friends with Sylvia Plath and Ted Hughes. In 1968, Merwin moved to New York City, separating from his wife who stayed at their home in France. In the late 1970s, Merwin moved to Hawaii and eventually was divorced from Dido Milroy. He married Paula Schwartz in 1983.[8]

In 1952 Merwin's first book of poetry, A Mask for Janus, was published in the Yale Younger Poets Series. W. H. Auden selected the work for that distinction. Later, in 1971 Auden and Merwin would exchange harsh words in the pages of The New York Review of Books. Merwin had published "On Being Awarded the Pulitzer Prize" in the June 3, 1971, issue of The New York Review of Books outlining his objections to the Vietnam War and stating that he was donating his prize money to the draft resistance movement.

From 1956 to 1957 Merwin was also playwright-in-residence at the Poet's Theatre in Cambridge, Massachusetts; he became poetry editor at The Nation in 1962. Besides being a prolific poet (he has published over fifteen volumes of his works), he is also a respected translator of Spanish, French, Latin and Italian poetry (including Dante's Purgatorio) as well as poetry from Sanskrit, Yiddish, Middle English, Japanese and Quechua. He also served as selector of poems of the late American poet Craig Arnold (1967–2009).[citation needed]

Merwin is probably best known for his poetry about the Vietnam War, and can be included among the canon of Vietnam War-era poets which includes such luminaries as Robert Bly, Adrienne Rich; Denise Levertov; Robert Lowell; Allen Ginsberg and Yusef Komunyakaa. In 1998, Merwin wrote Folding Cliffs: A Narrative, an ambitious novel-in-verse about Hawaiʻi in history and legend.[original research?]

Merwin's early subjects were frequently tied to mythological or legendary themes, while many of his poems featured animals. A volume called The Drunk in the Furnace (1960) marked a change for Merwin, in that he began to write in a much more autobiographical way.[citation needed] The title-poem is about Orpheus, seen as an old drunk. 'Where he gets his spirits / it's a mystery', Merwin writes; 'But the stuff keeps him musical'. Another poem of this period — 'Odysseus' — reworks the traditional theme in a way that plays off poems by Stevens and Graves on the same topic.

In the 1960s, Merwin lived in a small apartment in New York City's Greenwich Village,[6] and began to experiment boldly with metrical irregularity. His poems became much less tidy and controlled. He played with the forms of indirect narration typical of this period, a self-conscious experimentation explained in an essay called 'On Open Form' (1969). The Lice (1967) and The Carrier of Ladders (1970) remain his most influential volumes. These poems often used legendary subjects (as in 'The Hydra' or 'The Judgment of Paris') to explore highly personal themes.

In Merwin's later volumes — such as The Compass Flower (1977), Opening the Hand (1983), and The Rain in the Trees (1988) — one sees him transforming earlier themes in fresh ways, developing an almost Zen-like indirection. His latest poems are densely imagistic, dream-like, and full of praise for the natural world. He has lived in Hawaii since the 1970s. Migration: New and Selected Poems won the 2005 National Book Award for poetry.[9] A lifelong friend of James Wright, Merwin wrote an elegy to him that appears in the 2008 volume From the Other World: Poems in Memory of James Wright.

In June 2010, the Library of Congress named Merwin the seventeenth United States Poet Laureate to replace the outgoing Kay Ryan.[4][5] He is the subject of the 2014 documentary film Even Though the Whole World Is Burning. Merwin appeared in the PBS documentary "The Buddha," released in 2010. He had moved to Hawaii to study with the Zen Buddhist master Robert Aitkin in 1976.[11]

Today, Merwin lives on a former pineapple plantation built atop a dormant volcano on the northeast coast of Maui.[4][5]

Each year links to its corresponding "[year] in poetry" or "[year] in literature" article:

Each year links to its corresponding "[year] in poetry" or "[year] in literature" article:

Merwin's literary papers are held at The Rare Book & Manuscript Library (University of Illinois at Urbana-Champaign). The collection, which is open to researchers, consists of some 5,500 archival items and 450 printed books.[24][25]