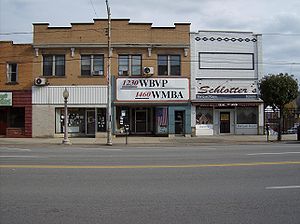 WBVP and WMBA are news/talk radio stations based in Beaver Falls, Pennsylvania, United States. The stations serve Beaver County, Pennsylvania and simulcast their programming. The stations are owned by Mark and Cynthia Peterson, through licensee Sound Ideas Media, LLC.

WBVP (Beaver Falls, PA) started broadcasting on May 25, 1948 and was founded by a threesome from Pittsburgh, PA including Tom Price, Frank Smith and Charles Ondurka. In 1955, The original partners reorganized and formed Beaver Valley Broadcasting. Around 1970, Hall Communications bought WBVP along with an FM radio station, originally known as WBVP - FM at 106.7 mhz, that had been put on the air in 1968. In 1985, Ted and Marilee Ruscitti from Hopewell township, PA bought WBVP and the FM station, that by this point in time the call letters had been changed and it was known as WWKS, through their company, MT Communications. In 1990, The stations were sold to the Baltimore Radio Show out of Towson, MD with Harry Shriver serving as managing partner. Carnegie, PA native Frank Iorio, Jr., along with partners Aaron Daniels and Mike Swartz formed Pittsburgh Radio Partners and bought the two stations in 1994. Just a year later, the trio sold the FM station, WWKS, to Secret Communications and at that time Iorio bought out his partners and continued to own and operate WBVP through his newly formed company, Iorio Broadcasting, Inc. Iorio then bought WMBA (Ambridge, PA) from Donn Communications in 2000. Long time station employee, Mark Peterson along with his wife, Cyndi, Formed Sound Ideas Media, LLC, and purchased WBVP and WMBA in 2014.

The two stations competed for 40 years, since WMBA went on the air in the late 1950s. Miners Broadcasting put WMBA on the air. The station was sold in 1970 to John Bride, a former Pittsburgh television advertising salesman. His Bride Broadcasting, Inc. instituted a more contemporary format, including local talk shows and Top 40 music after 4 p.m. during the week and on weekends. Bride continued to own and operate the station even after he moved his base of operations to Maine, where he owned other radio stations. Bride finally sold the station to Donn Communications in the mid-1980s and the studios and offices moved from a converted house at 291 14th Street in Ambridge to a storefront at 761 Merchant Street in Ambridge's business district.

WBVP had been the local station serving Beaver County exclusively for many years. The following year, WBVP was joined by an FM sister station, first known as WBVP-FM, but that station later changed its calls to WWKS, becoming best known throughout the 70's and 80's as "Kiss FM". Local ownership of this radio station ceased in 1995, when it was sold to Clear Channel Communications, and today is operated as Pittsburgh station WAOB-FM. WBVP was sold in a spin-off transaction to present owner Frank Iorio.

In May 2000, WMBA owner Donn Wuycik, president of Donn Communications, entered into an agreement to sell WMBA to Iorio Broadcasting, for an undisclosed amount.

Since 2000, though, they have been under single ownership and WMBA's operations were moved from 761 Merchant Street in Ambridge into WBVP's existing facilities at 1316 Seventh Avenue in Beaver Falls. WBVP and WMBA, which aired separate talk formats with nostalgia and adult contemporary music, respectively, began to duplicate more of each other's programming as time evolved, and today the stations are nearly 100 percent simulcast. The exceptions are usually confined to high school sports, where each station will air live play-by-play of a game significant to its community.

WBVP and WMBA are generally live and local from 6 a.m. until 1 p.m. on weekdays. The local programming centers around news and talk shows. The remainder of the broadcast day is then usually filled with syndicated programming. In recent years, both stations have aired play-by-play of the Pittsburgh Steelers, Pittsburgh Penguins and Pittsburgh Pirates games.