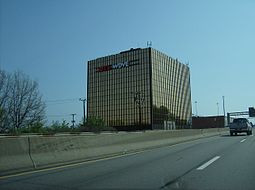 WDVE's studios sit next to Interstate 376 in western Pittsburgh.

WDVE (102.5 FM) is a classic rock music formatted radio station in Pittsburgh, Pennsylvania, USA at 102.5 MHz. It is often referred to by Pittsburghers as simply "DVE." WDVE's transmitter is located on Pittsburgh's North Side. Since 2006, the station has been the highest-rated radio station in the Pittsburgh market, surpassing longtime market leader KDKA.

The station has aired rock music since 1969, when it was owned by ABC. Previously, it was known as KQV-FM and simulcasted sister station KQV. The new programming was a tape service of album rock entitled "Love" created by ABC official Allen Shaw designed specifically for airing on the 7 FM stations owned by ABC. Shaw changed the format from the automated "Love" format to live free form album rock in 1970. The station's current call letters were chosen in 1971 at the height of the "hippie" era. "DVE" was derived from "dove", the bird of peace. In the fall of 1971, Shaw, along with ABC Radio programming executive Bob Henaberry, replaced the "free form" rock programming with the very first album rock "format", playing only the best cuts from the best selling rock albums with minimal disc jockey talk. WDVE was the most successful FM radio station in Pittsburgh throughout the 1970s. In early print marketing, the phrase "Rock'n Stereo WDVE 102.5" was set in white text against a black oval background surrounded by vivid rainbow-like colors. Later, the logo was rendered in white and yellow with red accents against a black background, generally using the slogan "DVE Rocks."

Starting in the 1980s, the station started playing the Beat Farmers song Happy Boy every Friday around 3 PM at the start of the afternoon drive time shift to signal the end of the work week and the start of the weekend. On Fridays at noon, they air a recording of the band KISS saying; "Hey yinz guys! It's FRIDAY!!", immediately followed by "Rock and Roll All Nite".

Radio personality and WEBN alum Maxwell Slater "Max" Logan (Ben Bornstein), formerly heard on WMMS, WNCX in Cleveland and now on WLUP-FM in Chicago as host of The Maxwell Show, spent time at WDVE in the mid-1990s. [1]

The station is currently owned by iHeartMedia, Inc., and (along with WBGG) serves as the flagship radio station of the Pittsburgh Steelers radio network. For years it was the home for Pittsburgh Penguins hockey (currently WXDX is the flagship), promoting itself with such oddities as a young Jaromir Jagr reading the morning weather forecast in heavily accented English during his suspension from the NHL.

Because of the station having a largely male audience, the station refers to fellow iHeartMedia, Inc. stations WXDX-FM and WPGB as "brother" stations as opposed to the more commonly used term "sister" station, since WXDX also has a predominantly male audience and all three have younger listeners. In recent years, the station's format has gradually drifted towards classic rock, with current releases rarely incorporated into the playlist, though some recent songs such as Ozzy Osbourne's 2007 hit I Don't Wanna Stop are played on the station (Osbourne himself is a fixture on many classic rock stations). It's still generally a classic rock station per RadioStationWorld.com. For example, Pittsburgh had been without a full-time classic rock station since the flip of WRRK to adult hits, even though WDVE per the station's parent Clear Channel is generally considered as a classic rock.

As of January 2012 Randy Baumann and the DVE Morning Show airs on weekdays from 6 AM to 10 AM. The rest of the morning show team are newsreader Val Porter, sportscaster Mike Prisuta, "executive contributor" Scott Paulsen,[2][3] and comedian Bill Crawford.[4] The show features a variety of comedy skits, musical parodies, and music.

Prior to hosting solo, Baumann was teamed with Jim Krenn starting in early 2000. Prior to that, Krenn had been on with Scott Paulsen, who along with "News Goddess" Lauri Githens had hosted the morning show from 1986-1988 (after "Little Jimmy" Roach and "Big Steve" Hansen of "The DVE Morning Alternative" were not offered a new contract after their 1980-1986 stint). [5]

On Saturday, 31 December 2011, Clear Channel announced that Jim Krenn would no longer be part of the DVE Morning show but is still employed at the station. According to a statement made by Dennis Lamme, President and Market Manager of Clear Channel Media & Entertainment-Pittsburgh, "We are currently in discussion with Jim about his role with the station moving forward.".[6] They are again using the name "DVE Morning Show".[7] Krenn's official departure from Clear Channel was announced on 19 January 2012.[8] As of February 23, 2012, WDVE has branded the morning show "Randy Baumann and the DVE Morning Show".

On Thursday January 19, 2012 It was announced that Scott Paulsen was returning to the WDVE Morning Show.

WDVE broadcasts on its HD2 subchannel dates back to 2006, when the subchannel launched a format focusing on Blues music. In August 2011, HD2 became a 24-hour channel devoted to Steelers coverage, billed as "Steelers Nation Radio."