WEHM (92.9 FM) is an Adult album alternative formatted radio station that is licensed to Manorville, New York and serves eastern Long Island. It broadcasts from a tower in Quogue, New York. WEHM's programming is simulcast on WEHN (96.9 FM) East Hampton, the station which originally had been home to WEHM when it was located on 96.7 MHz. WEHN's signal covers the easternmost parts of Long Island as well as a rimshot signal into the New London-Groton, Connecticut and Westerly, Rhode Island areas.

Both stations are owned by Lauren and Roger Stone, through licensee LRS Radio, LLC, and broadcast from studios in Water Mill, New York alongside sister stations WBAZ and WBEA. 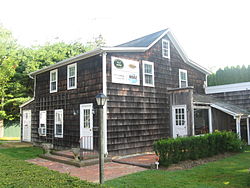 WEHM signed on in 1993 at 96.7 MHz licensed in East Hampton to East Hampton Broadcasting. Its ownership was made up of majority owners Leonard Ackerman, a local attorney and than Sony America Chairman Mickey Shulhof with minority interest held by such notables as Billy Joel, Christie Brinkley and others. The station's staff was filled with young but veteran staffers from the neighboring Nassau-Suffolk Arbitron market. Though the allocation had existed for several years prior, the station would sign on with an Adult Contemporary format until inexplicably changing to the eclectic-leaning AAA format. The AAA format was an odd match, given its limited audience and the fact that it was actually gaining significant listenership in the Hamptons with its then-current AC format.

In 2000, then-owner AAA Entertainment obtained a construction permit for a new FM station at 92.9 MHz licensed to Southampton. After several years of planning and development, the 92.9 frequency would sign on in June 2003 and would become WEHM's permanent home that July.[1] At that time, the 96.7 frequency took the WHBE calls[2] and took on a Bloomberg Radio format (a move reportedly done by the influence of Michael Bloomberg).

The two WEHMs would be united in April 2006 when WHBE quietly moved up the dial from 96.7 to 96.9 MHz and began to simulcast WEHM's programming. WHBE changed their call letters to WEHN.

On June 24, 2008, the FCC approved a change in WEHM's community of license from Southampton, NY to Manorville, NY.