From Infogalactic: the planetary knowledge core
Jump to: navigation, search
This article is about the AM radio station in Cincinnati, Ohio. For other uses, see WLW (disambiguation).

WLW (700 AM) – branded Newsradio 700 WLW – is a commercial news/talk radio station licensed to Cincinnati, serving Greater Cincinnati. Owned by iHeartMedia, WLW is a 50,000-watt clear-channel station that covers much of the eastern half of North America at night. WLW serves as the Cincinnati affiliate for ABC News Radio; a flagship station for the Cincinnati Bengals and Cincinnati Reds radio networks; and the home of radio personality Bill Cunningham. The WLW studios are located in Sycamore Township, while the station transmitter resides in Mason. Besides a standard analog transmission, WLW broadcasts over a single HD Radio channel, and is available online via iHeartRadio.[10]

In July 1921, radio manufacturer Powel Crosley Jr. began 20-watt tests from his College Hill home, broadcasting "Song of India" continuously under the callsign 8CR.[2] Powell already owned a number of enterprises, including the Crosmobile and a refrigerator-freezer company, and owned the Cincinnati Reds baseball club from 1934 to 1961. Crosley was innovative, personally inventing or funding the development of many then–cutting edge technological advances in his ventures which he placed in the able hands of his younger by two years brother, Lewis Crosley, who was a graduate engineer from the University of Cincinnati.

On March 22, 1922,[2] Crosley and his Crosley Broadcasting Corporation began broadcasting with the new callsign WLW and 50 watts of power. Crosley was a fanatic about the new broadcasting technology, and continually increased his station's capability. The power went up to 500 watts in September 1922, 1000 watts in May 1924, and in January 1925 WLW was the first broadcasting station at the 5000 watt level. On October 4, 1928, the station increased its power to 50 kilowatts.[2] Again it was the first station at this power level, which still is the maximum power currently allowed for any AM station in the United States.

At 50 kilowatts, WLW was heard easily over a wide area, from New York to Florida, but Crosley still wasn't satisfied. In 1933 he obtained a construction permit from the Federal Radio Commission for a 500 kilowatt superstation, and he spent some $500,000 ($9.14 million in 2020[11]) building the transmitter and antenna.

It was the first large amplifier used in the United States for public domestic radio broadcasting and was in operation between 1934 and 1939. It was an experimental amplifier and was driven by the radio station's regular 50 kW transmitter. It operated in class C with high-level plate modulation. The amplifier required a dedicated 33 kV electrical substation and a large pond complete with fountains for cooling. It operated with a power input of about 750 kW (plus another 400 kW of audio for the modulator) and its output was 500 kW.

In January 1934 WLW began broadcasting at the 500 kilowatt level late at night under the experimental callsign W8XO. In April 1934 the station was authorized to operate at 500 kilowatts during regular hours under the WLW call letters. On May 2, 1934, President Franklin D. Roosevelt pressed a ceremonial button that officially launched WLW's 500-kilowatt signal.[12] As the first station in the world to broadcast at this strength, WLW received repeated complaints from around the United States and Canada that it was overpowering other stations as far away as Toronto. In December 1934 WLW cut back to 50 kilowatts at night to mitigate the interference, and began construction of two shorter tower antennas southwest across the street to be used to reduce signal strength towards Canada (the two shorter towers were fed out of phase with the signal to null in the opposite direction they were from the main Blaw-Knox tower). With these antennas in place, full-time broadcasting at 500 kilowatts resumed in early 1935. However, WLW was continuing to operate under special temporary authority that had to be renewed every six months, and each renewal brought complaints about interference and undue domination of the market by such a high-power station. The FCC was having second thoughts about permitting extremely wide-area broadcasting versus more locally oriented stations, and in 1938, the US Senate adopted the "Wheeler" resolution, expressing it to be the sense of that body that more stations with power in excess of 50 kilowatts are against the public interest. As a result, in 1939 the 500-kilowatt broadcast authorization was not renewed, bringing an end to the era of the AM radio superstation.[13] Because of the impending war and the possible need for national broadcasting in an emergency, the W8XO experimental license for 500 kilowatts remained in effect until December 29, 1942. In 1962 the Crosley Broadcasting Corporation again applied for a permit to operate at 750 kilowatts, but the FCC denied the application.

Many reports have surfaced over the years of the power fluctuations from those who lived near the 500 kilowatt transmitter. Residents would see their lights flicker in time to the modulation peaks of the transmitter. It was widely reported that the signal was so overpowering some people picked up WLW radio on the metal coils of mattress and boxed bedsprings,[14] similar to KDKA in Pittsburgh, Pennsylvania. Arcing often occurred near the transmission site.[15]

In the 1930s, WLW occupied the entire 48th floor of Carew Tower. In 1942, the station moved its studios into the Crosley Square building, a converted Elks Lodge No. 5 in downtown Cincinnati.[16] WLW's sister television station, WLWT (then branded WLW-T), was founded in the same building. In 1955, WLW and WLWT became the first radio and television station to own a weather radar.[17]

A major promotion of the station in the 1940s was the Boone County Jamboree. An ad in the trade publication Billboard in 1942 noted: "WLW Boone County Jamboree acts played to 169,406 persons, July 4 to October 4. An all time record–63 bookings in seven States. New attendance records established at 14 events."[18]

From the late 1970s to 1989, WLW's studios were located downtown at 3 East 4th Street, now the site of the National City Bank (now PNC) Tower in downtown Cincinnati. From 1989 to 2005, WLW was located in Mt. Adams, a trendy neighborhood overlooking downtown. The address remained 1111 St. Gregory Street. WLW was originally on the fourth floor, where it shared studios with sister station WEBN. In 1992, as Jacor started to consolidate stations, the fifth floor was taken over by the human resources and traffic departments, along with new studios for 550 WLWA, formerly WKRC. In 1995, Jacor moved all of its stations into the Mt. Adams facility leasing the entire building.

Along with other Clear Channel talk stations, WLW switched from ABC News Radio to Fox News Radio.[19] However, on June 26, 2006, a realignment of network affiliations by Clear Channel's Cincinnati AM stations reunited WLW with ABC News Radio. (WKRC picked up Fox News Radio[citation needed], while WCKY took CBS Radio.)[20] Not included in the rearrangement was ABC Radio commentator Paul Harvey. WLW continued to carry Harvey's commentaries through all the changes, although after extended absences, Harvey was dropped by WLW in April 2008. 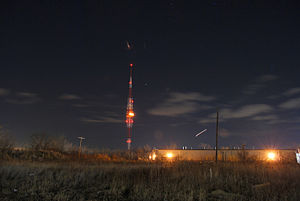 WLW currently broadcasts using 50,000 watts of power, the maximum allowed for an AM clear channel broadcaster under current FCC rules.

The high power broadcasts led WLW to call itself "The Nation's Station." WLW also broadcasts using the HD-Radio digital system. Like other stations owned by iHeartMedia, WLW uses the iHeartRadio platform to stream its webcast. For a time in the early 1960s, WLW called itself the world's highest fidelity radio station.

After sundown, the 50 kW signal can be heard across much of the eastern half of the United States and Canada. It is believed WLW can be heard, regularly, in at least 38 U.S. states at night,[21] and the station refers to this in some advertising. Its daytime signal can be heard at city-grade strength as far east as Columbus, as far west as the Indianapolis suburbs, and as far south as Frankfort, Kentucky. It provides at least secondary coverage to most of Ohio and Indiana, and much of northern and central Kentucky. Under the right conditions, it can be picked up as far away as Cleveland and Chicago.

In 1985 overnight host Dale Sommers received a call from Hawaii on his overnight program.

The station's first 50 kW transmitter, made by Western Electric, is still functional at 83 years of age and sees occasional service, including on December 31, 1999, when it was powered up and helped to bring WLW into the new year on January 1, 2000.[2] The station's unusual diamond-shaped antenna (designed and erected by Blaw-Knox Tower company) is one of eight still operational in the United States (the second to be built after WSM's) and is featured on the official seal of the City of Mason.

Although Crosley also owned the Cincinnati Reds along with WLW from 1934 to 1945, WLW didn't become the Reds' flagship station until 1969, a status it has retained ever since. Over the years, WLW has also been the flagship for Cincinnati Bengals football, University of Cincinnati football and basketball, Xavier University basketball and the games of the Cincinnati Royals (now the Sacramento Kings) of the National Basketball Association.

In 2013, the Cincinnati Enquirer had announced that WLW had purchased an FM translator from the Northern Kentucky University for an FM simulcast, and moved it to Port Union, Ohio.[22] The station is W233BG on 94.5, operating at 120 watts.

From March 1, 2006 to March 6, 2009 WLW was simulcast live on XM Satellite Radio channel 173. This broadcast was delay-free, and gave the station a signal that reached the continental United States. Excluded from the simulcast were Cincinnati Bengals play-by-play coverage, which the station did not own the rights to broadcast nationally. However, college sport play-by-play from the Xavier Musketeers and the Cincinnati Bearcats were broadcast on XM, as were Cincinnati Reds games (as XM had purchased the rights to Major League Baseball separately). The station was placed on the satellites by at-the-time Clear Channel programming executive Sean Compton (brother of WLW personality Steve Sommers), who claimed WLW was his favorite radio station. Compton left the company in 2008 for Tribune Company, and shortly after WLW was removed. The channel remained empty for several months by simulcasting Talk Radio 165, until December 2009, when Bollywood & Beyond debuted on XM 173. After things settled down, WLW's 12am to 5 am overnight programming of America's Trucking network featuring Steve Sommers and Eric 'Bubba Bo' Boulanger was simulcast on XM 152 Extreme talk.