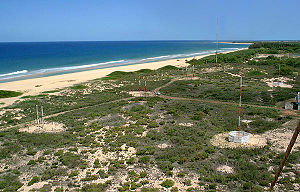 WWVH is the callsign of the U.S. National Institute of Standards and Technology's shortwave radio time signal station in Kekaha, on the island of Kauai in the state of Hawaii. Lua error in Module:Coordinates at line 668: callParserFunction: function "#coordinates" was not found.

WWVH is the Pacific sister station to WWV, and has a similar broadcast format. Like WWV, WWVH's main function is the dissemination of official U.S. Government time, through exactly the same methods as found on WWV's signal.

To minimize interference with the WWV broadcasts on the same frequencies, WWVH's broadcasts on 5, 10 and 15 MHz are directional, pointed primarily west. Despite this strategy, in certain places, particularly on the west coast of North America; and at certain times, due to ionospheric conditions, the listener can actually hear both WWV and WWVH on the same frequency at the same time. The information modulated on the carrier is modified to reduce confusion if both are received simultaneously. In particular, voice announcements on one correspond to silent periods on the other.

WWVH broadcasts its signal on four transmitters, one for each frequency. The 2.5 MHz transmitter puts out an ERP of 5 kW, while the other transmitters use 10 kW of ERP. The 2.5 MHz antenna is one half-wavelength tall, and radiates in an omnidirectional pattern. The remaining antennas each consist of two elements one half-wavelength tall and horizontally separated by one quarter-wavelength. The signal radiating from one element is in quadrature phase with respect to the signal from the other. This results in a cardioid radiation pattern with a maximum gain directed west.

The WWVH signal is extremely similar to the WWV signal, but some changes have been made to reduce confusion if both are heard at once:[1]

WWVH identifies itself twice each hour, at 29 and 59 minutes past the hour. The text of the identification is as follows: