Waddesdon Manor is a country house in the village of Waddesdon, in Buckinghamshire, England. It is located in the Aylesbury Vale, 6.6 miles (10.6 km) west of Aylesbury. The house was built in the Neo-Renaissance style of a French château between 1874 and 1889 for Baron Ferdinand de Rothschild (1839–1898) as a weekend residence for grand entertaining.

The last member of the Rothschild family to own Waddesdon was James de Rothschild (1878–1957). He bequeathed the house and its contents to the National Trust. It is now administered by a Rothschild charitable trust that is overseen by Jacob Rothschild, 4th Baron Rothschild. It is one of the National Trust's most visited properties, with around 335,000 visitors annually.[1]

File:Waddesdon Manor front façade, UK - Diliff.jpg
The towers were modelled on the towers of Château de Maintenon
File:Stairtpwer.jpg
One of the twin staircase-towers inspired by those at the Château de Chambord

Prior to the construction of Waddesdon Manor, no house existed on the site. Ferdinand de Rothschild wanted a house in the style of the great Renaissance châteaux of the Loire Valley.[2] The Baron, a member of the Viennese branch of the Rothschild banking dynasty, chose as his architect Gabriel-Hippolyte Destailleur.[3] Destailleur was already experienced in working in this style, having overseen the restoration of many châteaux in that region, in particular that of the Château de Mouchy.

Through Destailleur's vision, Waddesdon embodied an eclectic style based on the châteaux so admired by his patron, Baron Ferdinand. The towers at Waddesdon were based on those of the Château de Maintenon, and the twin staircase towers, on the north facade, were inspired by the staircase tower at the Château de Chambord.[4] However, following the theme of unparalleled luxury at Waddesdon, the windows of the towers at Waddesdon were glazed, unlike those of the staircase at Chambord. They are also far more ornate.

The structural design of Waddesdon, however, was not all retrospective. Hidden from view were the most modern innovations of the late 19th century including a steel frame, which took the strain of walls on the upper floors, which consequently permitted the layout of these floors to differ completely from the lower floors.[5] The house also had hot and cold running water in its bathrooms, central heating, and an electric bell system to summon the numerous servants. The building contractor was Edward Conder & Son.[6] 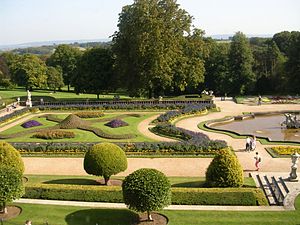 Once his château was complete, Baron Ferdinand installed his extensive collections of French 18th-century boiseries, Savonnerie carpets, Gobelins and Beauvais tapestries, furniture, Sèvres ceramics, and books, as well as English and Dutch paintings and Renaissance treasures. Works were acquired for their exquisite quality and fine provenance. One of the highlights of the collection is the extraordinary musical automaton elephant, dating from 1774 and made by the French clockmaker H Martinet.[7] Of the ten surviving examples of the Sèvres pot-pourri vase in the shape of a ship from the 1760s, three are at Waddesdon, including one with a very rare scene of a battle connected to the Seven Years' War.[8]

In the 1890s, Baron Ferdinand focused on the Renaissance collection for his small museum in the New Smoking Room.[9] This collection was bequeathed to the British Museum and is now known as the Waddesdon Bequest.[10] The interior of Waddesdon Manor was photographed in 1897 for Baron Ferdinand's privately published The Red Book.[11]

File:Waddesden Manor03.JPG
The terrace and parterre garden at Waddesdon Manor, overlooked by the building's south face

Extensive landscaping of the hill was carried out, including leveling the top. The gardens and landscape park were laid out by the French landscape architect Elie Lainé. An attempt was made to transplant full-grown trees by chloroforming their roots, to limit the shock. While this novel idea was unsuccessful, many very large trees were successfully transplanted. The gardens were enhanced with statuary, pavilions and an aviary. The Proserpina fountain was brought to the Manor at the end of the 19th century from the Palace of the Dukes of Parma in northern Italy: the Ducal Palace of Colorno. The gardens are listed Grade I on the Register of Historic Parks and Gardens.[12]

Baron Ferdinand played host to many important guests including the future Edward VII.[13] The grounds and house were such a wonder of their day that, in 1890, Queen Victoria invited herself to view them. The Queen was, however, more impressed by the electric lighting in the house than the wonders of the park. Fascinated by the invention she had not seen before, she is reported to have spent ten minutes switching a newly electrified 18th-century chandelier on and off.[14]

When Baron Ferdinand died in 1898, the house passed to his sister Alice de Rothschild, who further developed the collections.[15] Following Alice de Rothschild's death in 1922, the property and collections passed to her great-nephew James A. "Jimmy" de Rothschild of the French branch of the family, who further enriched it with objects from the collections of his late father Baron Edmond James de Rothschild of Paris.[16] James hosted a Liberal Party rally at Waddesdon in 1928, where David Lloyd George addressed the crowd.[17] During World War II, children under the age of five were evacuated from London and lived at Waddesdon Manor.

When James de Rothschild died in 1957, he bequeathed Waddesdon Manor, 200 acres (0.81 km2) of grounds and its contents to the National Trust, to be preserved for posterity. A nearby ancillary property, The Pavilion at Eythrope, became the home of James de Rothschild's widow, Dorothy de Rothschild, usually known as "Mrs James". She took a very keen interest in Waddesdon for the remainder of her long life. Eythrope and the rest of the Waddesdon estate were bequeathed to the 4th Lord Rothschild.

The Manor underwent a major restoration from 1990 to 1997, and the visitor attractions were enhanced. In 2003, in a burglary committed by the Johnson Gang, approximately 100 priceless gold snuff boxes and other items were stolen from the collection prompting the installation of new security measures.[20] In 2012, it was announced that Waddesdon Manor would be one of the sites for Jubilee Woodlands, designated by the Woodland Trust to commemorate Queen Elizabeth II's Diamond Jubilee.[21]

New works of art continue to be acquired to complement the existing collections at Waddesdon, such as Le Faiseur de Châteaux de Cartes by Jean-Baptiste-Siméon Chardin, added in 2007. Contemporary works have also been sited near the Manor and on the wider estate including by Richard Long, Sarah Lucas and Angus Fairhurst.[22] Commissions to contemporary architects have also occurred. Windmill Hill Archive (2011) was designed by Stephen Marshall.[23] Flint House (2015) was designed by Skene Catling de la Peña.[24] It won RIBA House of the Year in 2015.[25] In April 2015, artist Joana Vasconcelos installed two sculptures entitled Lafite in front of the Manor.[26]

Since 2012, when Christie's chose the Manor to exhibit sculptures by leading contemporary artists,[27] the Manor has gone on to host other major exhibitions, including the Lod Mosaic.[28] Waddesdon was one venue celebrating the work of Henry Moore in 2015.[29] Bruce Munro has also exhibited several works at the Manor.[30]

File:Waddesdon Manor - geograph.org.uk - 1362956.jpg
The North-West side of Waddesdon

Waddesdon Manor has been used in many television series.[31] These include Howards' Way (1985) as a chateau in France belonging to Charles Freere. The house more recently stood in for the exterior of the fictional Haxby Park in the second series of Downton Abbey (2011) (the interior was filmed at Halton House, another country home once owned by the Rothschilds). Estate roads featured in And Then There Were None (BBC One, 26–28 December 2015).