The US Office of Management and Budget also includes Wake Forest as a part of the Raleigh-Durham-Chapel Hill Combined Statistical Area, which has a population of 1,998,808 as of U.S. Census 2012 Population Estimates.[7] Effective June 6, 2003 the Office of Management and Budget redefined the Federal Statistical Areas and dismantled what had been for decades the Raleigh-Durham-Chapel Hill, MSA and split them into two separate MSAs even though the region still functions as a single metropolitan area.

In 1832,[8] Dr. Calvin Jones, originally from New England, bought 615 acres (2.49 km2) of forested land in Wake County, North Carolina. The sparsely populated area became known as the Forest of Wake, or Wake Forest. Jones sold his farm to the North Carolina Baptist Convention for $2,000, who opened the Wake Forest Manual Labor Institute, later Wake Forest College, on the site. The Raleigh & Gaston Railroad, completed in 1840, established a depot in nearby Forestville that stimulated the school and surrounding village. College leaders convinced the railroad to move the depot even closer to the college in 1874, leading to more economic development. This community was incorporated as the "Town of Wake Forest College" in 1880. In 1909, the word "College" was removed from the name of the town. The college moved to the much larger city of Winston-Salem in 1956.[9] Southeastern Baptist Theological Seminary began offering classes on the original campus of Wake Forest University in 1950, and occupied the entire campus when the university completed its move.

Wake Forest operates under the Council-Manager form of government. The citizens elect a Mayor and Board of Commissioners as the town's governing body. The Town Manager is appointed by the Board to serve as the chief operating officer administering all municipal affairs.[10][11] The current mayor is Vivian A. Jones (term expires 2017), and current council members include Zachary Donahue (2015), Anne Reeve (2015), Jim Thompson (2017), Greg Harrington (2015) and Margaret Stinnett (2017).[12]

A new town hall facility opened in downtown Wake Forest in September 2010,[13] and was LEED Platinum certified in November 2011.[14] All town departments are housed in the facility, except police (which has its own building nearby) and public works.

Wake Forest is located in the northeast central region of North Carolina, where the North American Piedmont and Atlantic Coastal Plain regions meet. This area is known as the "fall line" because it marks the elevation inland at which waterfalls begin to appear in creeks and rivers. Its central Piedmont location situates Wake Forest about three hours by car west of Atlantic Beach, North Carolina, and four hours east of the Great Smoky Mountains.

There were 4,617 households out of which 41.7% had children under the age of 18 living with them, 60.3% were married couples living together, 10.7% had a female householder with no husband present, and 26.2% were non-families. 20.6% of all households were made up of individuals and 6.0% had someone living alone who was 65 years of age or older. The average household size was 2.66 and the average family size was 3.11.

The town is served by nine public schools which are administered by the Wake County Public School System. Public schools include: 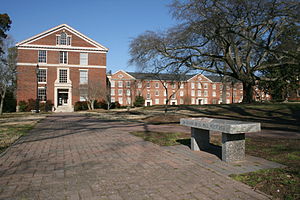 Wake Technical Community College [20] is an area two-year college with a north campus on Louisburg Road in Raleigh. Southeastern Baptist Theological Seminary is a seminary of the Southern Baptist Convention. It began offering classes in 1950 on the original campus of Wake Forest University and is commonly known by its acronym, SEBTS.

The DuBois Center is listed on the National Register of Historic Places.[21] The W. E. B. DuBois School opened in 1926 for the African-American community in Wake Forest before racial segregation ceased in 1971. After the school outgrew the facility and moved to a new location, the building was vacant for a decade until the DuBois Alumni Association purchased the building and made it into a community center.[22]

Wake Forest Historical Museum, also known as the Calvin Jones Historical House, was built in 1820 and was the residence of the first president of Wake Forest College and the center of activities that took place at the school. The museum displays the history of the town of Wake Forest as well as Wake Forest University. The house contains collections of photos, books, college publications, furniture, documents, professors’ writings, and medical, law and sports memorabilia.[26]

Wake Forest is served by ten parks and community centers. They include the following:[29]