Wall Township was named for General Garret D. Wall (1783-1850), a lawyer who commanded a Trenton volunteer company during the War of 1812 and was stationed at Sandy Hook. Wall served five years as clerk of the New Jersey Supreme Court and as quartermaster general of the state for more than 20 years before being chosen to represent the state in the United States Senate from 1835 to 1841.[23][24][25]

The Greenville Cemetery was established in 1734, when a casualty of the French and Indian War was buried there. The original structure of the Glendola Protestant Bible Church was built in 1776; The congregation dedicated a new church in 1964.

Allaire Village dates back to 1822, when James P. Allaire purchased what became known as the Howell Works in Wall, and though it was the largest producing bog iron manufacturing site in New Jersey by 1836, the ironworks were shut down in 1846. The village and surrounding acres were later preserved and gifted to the State of New Jersey to form Allaire State Park as a memorial to Hearst editor Arthur Brisbane, the last private owner of the site, who purchased the land in 1907 and built a palatial residence on that property that would later serve as the Arthur Brisbane Child Treatment Center. The Brisbane family donated the property to the State of New Jersey to establish Allaire State Park and the Historic Village at Allaire. Allaire Village Inc., a non-profit organization, is licensed by the State of New Jersey to operate the site now known as "The Historic Village at Allaire."

Wall Township was formed in 1851, from portions of Howell Township.[21]

The newly formed Marconi Wireless Telegraph Company of America, with its home office in England, purchases a 93-acre (380,000 m2) farm around 1900 that became the site of the company's receiver equipment for commercial transatlantic radio operation. The Marconi signal site was abandoned in 1924, but it was later occupied by the Ku Klux Klan until they were ejected in March 1928. The United States Army purchased the Marconi site in November 1941 and named it Camp Evans.[27][28]

The Allenwood Hospital, located at Squankum and Allenwood Roads, opened in January 1921 as a sanatorium for tuberculosis patients. In 1957, a 16-room building is dedicated to Geraldine L. Thompson, who served as president of the hospital's board of managers. In the 1960s, the facility becomes an annex to the John L. Montgomery Medical Home in Freehold Township, a county-run nursing home, and was renamed the Geraldine L. Thompson Care Center.[29]

In 1940, Edward I. Brown used an old World War I tank converted into a bulldozer to clear land for an airport that he turned into what is now Monmouth Executive Airport after completing his service in the United States Navy as a pilot during World War II; The airport was sold by the Brown family in 2007 to a private equity firm, despite lengthy attempts by Monmouth county to acquire the facility.[30]

The Roadside Diner, formerly the Circle Diner and Rusty's, was delivered to its Route 34 site by the Silk City Diner Co. in the 1940s. The diner was used for filming of a scene for the 1983 movie Baby It's You and appears on the cover of the 1994 Bon Jovi album Cross Road: 14 Classic Grooves, as well as having been featured in the 2008 music video for "Girls in Their Summer Clothes" by Bruce Springsteen.[31][32]

A suit filed by the American Civil Liberties Union in December 1999 against the township over a holiday display that included a nativity scene and a Hannukah menorah, contending that the religious symbols violate the constitutional separation of church and state was dismissed by a judge who ruled that the organization had filed its suit too close to the start of the holiday season.[33] The United States Court of Appeals for the Third Circuit issued a ruling in April 2001 vacating the decision of the district court in the case that the township's holiday display as modified in 2000 to included other seasonal decorations did not violate the Establishment Clause or the New Jersey Constitution and ruling that the ACLU lacked standing to file the case.[34]

Even though many of the surrounding towns sprung out of Wall Township, the only ZIP code that exclusively serves areas of Wall is Allenwood, but even it relies solely on a Post-office box system for regular mail services.[35]

Wreck Pond is a tidal pond located on the coast of the Atlantic Ocean, surrounded by Wall Township and the boroughs of Spring Lake, Spring Lake Heights, and Sea Girt. The Wreck Pond watershed covers about 12 square miles (31 km2) in eastern Monmouth County.[42]

Wall is governed under the Township form of government, which is the oldest form of government in New Jersey, having been first established in 1798, and enhanced by the Township Act of 1989. The five-member Township Committee is elected directly by the voters at-large in partisan elections to serve three-year terms of office on a staggered basis, with either one or two seats coming up for election each year as part of the November general election in a three-year cycle.[7][55] Each year, at the annual reorganization meeting, the Township Committee selects one of its members to preside as mayor for the year, and another to serve as deputy mayor. It is the only form of government in which the mayor is not elected directly by the voters of the municipality. Wall is one of 11 Monmouth County municipalities that use the Township form of government.[7][56]

Jeffrey Foster resigned from his position on the Township Committee in July 2014 to seek a position with the township.[63] Dominick DiRocco was appointed later that month to fill the vacant seat expiring in December 2016 and won election to serve the balance of the term of office.[64]

Wall Township is served by three fire districts and three first aid squads.[65] Wall Fire Company # 1, the first volunteer fire company to serve the township, was created in December 1909. Today the company remains all volunteer and serves the residents of the West Belmar section of town, also known as Wall Fire District # 1.[66] Glendola Fire Company was formed, also known as Wall Fire District #2, in May 1931. Wall First Aid was formed in September 1939 and is known as Wall Township First Aid & Rescue Squad. South Wall Fire-Rescue, the township's third fire district, was established in 1946. It responds to calls for service in the south end of town. Wall Community First Aid Squad 52-22 was established on November 15, 1960.[67] Wall Township also has a paid EMS squad (52-23) during daytime hours ran by Wall Police.

Monmouth County is governed by a Board of Chosen Freeholders consisting of five members who are elected at-large to serve three year terms of office on a staggered basis, with either one or two seats up for election each year as part of the November general election. At an annual reorganization meeting held in the beginning of January, the board selects one of its members to serve as Director and another as Deputy Director.[79] As of 2014[update], Monmouth County's Freeholders are Freeholder Director Lillian G. Burry (R, Colts Neck Township; term ends December 31, 2014),[80] Freeholder Deputy Director Gary J. Rich, Sr. (R, Spring Lake; 2014),[81] Thomas A. Arnone (R, Neptune City; 2016),[82] John P. Curley (R, Middletown Township; 2015)[83] and Serena DiMaso (R, Holmdel Township; 2016).[84][85] Constitutional officers elected on a countywide basis are County Clerk M. Claire French (Wall Township),[86] Sheriff Shaun Golden (Farmingdale)[87] and Surrogate Rosemarie D. Peters (Middletown Township).[88] 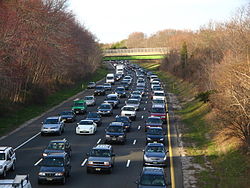 Heavy traffic on the Garden State Parkway in Wall Township.

New Jersey Transit offers train service on the North Jersey Coast Line at the Belmar, Spring Lake and Manasquan stations. NJ Transit bus service is available between the township and Philadelphia on the 317 route, with local service offered on the 830 and 836 routes.[107]

People who were born in, residents of, or otherwise closely associated with Wall Township include: