During the Ming and Qing dynasties, the shore of Guangdong suffered from pirates, and the area of Hong Kong was particularly vulnerable to pirates' attacks. Winding shores, hilly lands and islands and far from administrative centres made Hong Kong an excellent hideout for pirates. Villages, both Punti and Hakka, built walls against them. Some villages even protected themselves with cannons.

Over time, the walls of most walled villages have been partly or totally demolished.

In Punti Cantonese, Wai (圍, Walled) and Tsuen (村, Village) were once synonyms, hence most place names which include the word 'wai', were at some point in time a walled village.

Walled villages in Hong Kong are characterised by row houses arranged in a square or rectangular block, where the parallel rows of houses are separated by narrow lanes.[1]

Kat Hing Wai (吉慶圍) is a noted Punti walled village in Yuen Long District of Hong Kong.[citation needed] It often mistakenly believed to be Hakka, whose people have similar traditions.[citation needed] However the Punti people were from Southern China and the first to settle in Hong Kong. Kat Hing Wai's residents speak Cantonese, rather than Hakka.[citation needed] Popularly known as Kam Tin, from the name of the area, it is home to about 400 descendants of the Tang Clan, who built the village back in the 17th century.

Kat Hing Wai is a rectangular (100 m x 90 m) walled village. As a family stronghold, Kat Hing Wai has served the Tangs well through the centuries, protecting the residents against bandits, rival clans, and wild tigers. In the Qing Dynasty, a five-metre high blue brick wall and four cannon towers were added to defend against bandits. Today, the village is still completely surrounded by 18-inch-thick walls,[citation needed] outside which are the remains of a moat. However, most houses within the walls have been rebuilt in recent years. There is only one narrow entrance, with a pair of iron gates. 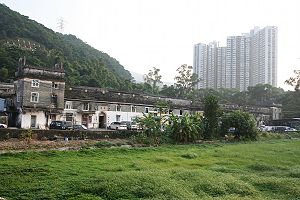 Tsang Tai Uk (曾大屋), also known as Shan Ha Wai, is another well-known Hakka walled village in Hong Kong, and one of the best preserved. It is located in Sha Tin, close to the south of the Pok Hong Estate, not far from the Lion Rock Tunnel Road. Built as a stronghold for the Tsang Clan, its construction started in 1847 and took around 20 years to complete. The village is built with granite, grey bricks and solid timber.

Sheung Shui Wai (上水圍), also known as Sheung Shui Heung (上水鄉), is one of the very few rural settlements having retained its original moat which was built in 1646. Characterized by its magnificent moat and landscape setting, the walled village is the core of the Liu clan, of which ancestors came originally from Fujian during the Yuan Dynasty (1271–1368). The village is located in Sheung Shui.

Fanling Wai (粉嶺圍) is a walled village in Fanling built by the Pang (彭) Clan. It is recognisable with the distinctive pond and layout including features such as cannons and watchtowers. All these elements were crafted to form an integral part of the village setting. Fanling Wai is the centre of the Pang Clan who arrived in Hong Kong late in the Song Dynasty.[2]