The Wallraf-Richartz-Museum & Fondation Corboud is one of the three major museums in Cologne, Germany. It houses an art gallery with a collection of fine art from the medieval period to the early twentieth century. 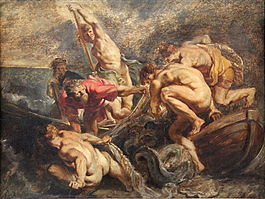 The museum dates back to the year 1824, when the comprehensive collection of medieval art from Franz Ferdinand Wallraf came to the city of Cologne by inheritance. The first building was donated by Johann Heinrich Richartz, and the museum was opened in 1861.[1]

The collection was regularly expanded by donations, especially the collection Haubrich, containing contemporary art, in 1946. In 1976, on the occasion of the donation of Mr. and Mrs. Ludwig the collection was split. The new Museum Ludwig took over the art exhibiting of the 20th century works.

The current building from 2001, near the Cologne City Hall, was designed by Oswald Mathias Ungers. Also in 2001, Swiss collector Gérard Corboud gave his comprehensive impressionist and postimpressionist collection as a permanent loan to the museum, which added “Fondation Corboud” to its name. 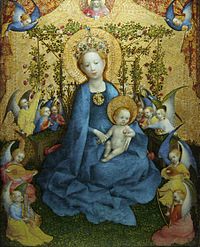 Madonna in the Rose Bower, by Stefan Lochner, 1448

The Madonna in the Rose Bower, shown at right, is among the Gothic paintings in the collection of the Wallraf-Richartz Museum. It was created by Stefan Lochner, who lived between 1410 and 1451 in Germany, mainly working in Cologne. He is considered a late Gothic painter. His work usually has a clean appearance, combining the Gothic attention toward long flowing lines with brilliant colors and a Flemish influence of realism and attention to detail. This painting is considered typical of his style. It was executed about 1450 and shows the Virgin and Child reposing in a blooming rose arbor that is attended by Lochner's characteristic, child angels.

The Wallraf-Richartz-Museum houses one of the few known works by Jacob van Utrecht, an altarpiece from the Great Saint Martin Church in Cologne, dated 1515 and the painter of the late-Baroque or Rococo period Giambattista Pittoni.

Among the other Early Renaissance works in the collection are the Adoration of the Child by Hieronymous Bosch, and a panel of the Jabach Altarpiece by Albrecht Dürer. 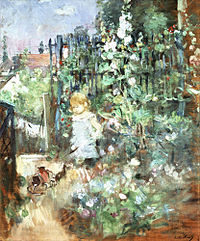 The Wallraf-Richartz collection includes the work of Impressionist painter, Berthe Morisot, which was painted in 1881, and is entitled, Child among staked roses or "Kind zwischen Stockrosen".

In 1864, paintings by Morisot began to be admitted for exhibition in the highly esteemed Salon de Paris. Sponsored by the government and judged by academicians, the Salon is the annual juried exhibition of the best new paintings and sculptures, the official art exhibition of the Académie des beaux-arts in Paris.

Her work continued to be selected for exhibition in the salon for ten years before, in 1874, she joined the "rejected" Impressionists in the first of their own exhibitions. Organized by Cézanne, Degas, Monet, Morisot, Pissarro, Renoir, and Sisley, it was held at the studio of the photographer, Nadar.

On February 14, 2008, the Wallraf-Richartz Museum announced that On the Banks of the Seine by Port Villez, attributed to Claude Monet, was a forgery. The discovery was made when the painting was examined by restorers prior to an upcoming Impressionism exhibition. X-ray and infrared testing revealed that a "colorless substance" had been applied to the canvas to make it appear older. The picture was acquired by the museum in 1954. The museum, which will keep the forgery, still has five authentic Monet paintings in its collection.[2]