Walter Bentley Woodbury (26 June 1834 – 5 September 1885) was an inventor and pioneering English photographer. He was one of the earliest photographers in Australia and the Dutch East Indies (now part of Indonesia). He also patented numerous inventions relating to various aspects of photography, his best-known innovation being the woodburytype photomechanical process.

Walter B. Woodbury was born in Manchester, England on 26 June 1834.[1] As a student of a civil engineer in Manchester he constructed his own camera obscuras from cigar boxes and eyeglass lenses.[2]

Photography in Australia, the Far East, Java and London

In 1851 Woodbury, who had already become a professional photographer, went to Australia and soon found work in the engineering department of the Melbourne waterworks. He photographed the construction of ducts and other waterworks as well as various buildings in Melbourne. He received a medal for his photography in 1854.[3]

At some point in the mid-1850s Woodbury met expatriate British photographer James Page. In 1857 the two left Melbourne and moved to Batavia (now Jakarta), Dutch East Indies, arriving 18 May 1857, and established the partnership of Woodbury & Page that same year.[4] 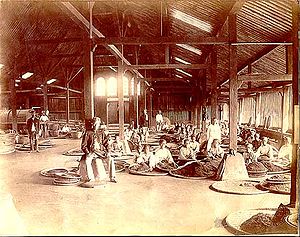 During most of 1858 Woodbury & Page photographed in Central and East Java, producing large views of the ruined temples near Surakarta, amongst other subjects, before 1 September of that year.[5] After their tour of Java, by 8 December 1858 Woodbury and Page had returned to Batavia.[6]

In 1859 Woodbury returned to England to arrange a regular supplier of photographic materials for his photographic studio and he contracted the London firm Negretti and Zambra to market Woodbury & Page photographs in England.[7]

Woodbury returned to Java in 1860 and during most of that year travelled with Page through Central and West Java along with Walter's brother, Henry James Woodbury (born 1836 – died 1873), who had arrived in Batavia in April 1859.[8]

On 18 March 1861 Woodbury & Page moved to new premises, also in Batavia, and the studio was renamed Photographisch Atelier van Walter Woodbury, also known as Atelier Woodbury. The firm sold portraits, views of Java, stereographs, cameras, lenses, photographic chemicals and other photographic supplies. These premises continued to be used until 1908, when the firm was dissolved.[9]

In his career Woodbury produced topographic, ethnographic and especially portrait photographs. He photographed in Australia, Java, Sumatra, Borneo and London.[10] Although individual photographers were rarely identified on Woodbury & Page photographs, between 1861 and 1862 Walter B. Woodbury occasionally stamped the mounts of his photographs: "Photographed by Walter Woodbury, Java".[11]

Return to England and invention of a photographic process

In late January or early February 1863, Woodbury left Java to return to England, because of ill health.[12]

Having returned to England, Woodbury invented the woodburytype photomechanical reproduction process, which he patented in 1864.[13] Between 1864 and 1885 Woodbury took out more than 30 patents in Britain and abroad for inventions relating to balloon photography, transparencies, sensitised films and improvements in optical lanterns and stereoscopy.[14] In addition to his inventions, Woodbury produced photographs documenting London's poor.[15]

Walter B. Woodbury died on 5 September 1885[11] while on holiday at Margate, England. He was buried at Abney Park Cemetery in Stoke Newington close to London where his family memorial stands to this day.