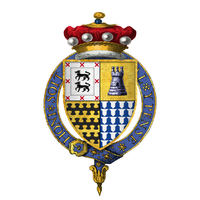 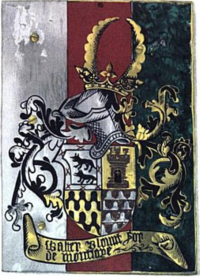 Walter Blount was born about 1416, the eldest son of Sir Thomas Blount (1378–1456) and Margery Gresley and grandson of Sir Walter Blount.

He was made Steward of the High Peak in Derbyshire and became a bitter rival of the local Vernon and Longford families, replacing the Vernons in parliament as the near permanent Knight of the Shire (1446–1448, 1450–1468) for Derbyshire. He succeeded his father, Sir Thomas Blount, as Treasurer of Calais in 1460, becoming governor a year later as a reward for service rendered to King Edward IV at the Battle of Towton. Edward conferred on him in 1467 rich estates in Devon forfeited by the Earl of Devon; and in 1465 Blount was made lord high treasurer and created Baron Mountjoy. This creation is noteworthy as one of the earliest examples of a baronial title not being of a territorial character; nor the title of a dignity already existing. Blount's great-grandfather had married Isolda, daughter and heiress of Sir Thomas de Mountjoy, and the title was probably chosen to commemorate this alliance.[1]

On his death on 1 August 1474 in Greyfriars, London his grandson Edward Blount, 2nd Baron Mountjoy inherited his title. His eldest son (and Edward's father) Sir William Blount had been killed at the Battle of Barnet in 1471.

Mountjoy married firstly Helena Byron, the daughter of Sir John Byron of Clayton, Lancashire,[2] by whom he had four sons and two daughters.