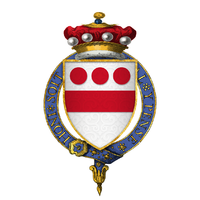 Walter Devereux, jure uxoris 7th Baron Ferrers of Chartley KG (c. 1431 – 22 August 1485) was a minor member of the English peerage and a loyal supporter of the Yorkist cause during the Wars of the Roses. He was killed at the Battle of Bosworth, fighting for Richard III.

Walter was born in Weobley, Herefordshire. His parents were Walter Devereux, Lord Chancellor of Ireland from 1449 to about 1451 and his wife Elizabeth Merbury.

His mother was the daughter and heiress of Sir John Merbury, Chief Justice of South Wales.

Like his father before him, Walter Devereux was a Yorkist. He was with the Duke of York at the Battle of Ludford Bridge on 12 October 1459, but surrendered and threw himself on the King’s mercy. Granted his life, he was condemned to forfeit his lands, and they were awarded to Humphrey Stafford, Earl of Stafford.[6] He later redeemed his properties for a fine of 500 marks.

A knight of the shire for Herefordshire in 1460, he accompanied Edward, Duke of York, on his advance in February 1460/1 from Gloucester to London. On 3 March 1461, Walter Devereux was present at the council held at Baynard’s Castle where it was resolved that Edward should be made King.

He fought at the Battle of Towton 29 March 1461, where he was knighted.[7] On 20 February 1461/2 Devereux received an extensive grant of forfeited lands. He accompanied Edward on the expedition to the north in November 1462.

As a Yorkist, Devereux held many offices under Edward IV. He was appointed 18 June 1463 as Constable of Aberystwith Castle for life, and 10 August 1464 joint keeper of ‘le heywode’ in Herefordshire. In 1461 and 1469, Walter was commissioner of array for Herefordshire, Shropshire and Gloucestershire, as well as Worcestershire in 1469. He also served in 1470 and 1471, as joint commissioner of array for Herefordshire, and then again in 1474 for Herefordshire and Shropshire. On 28 July 1470 he was appointed sheriff of county Carnarvon and Master-Forester of ‘Snoweden hilles’ in North Wales.

Walter Devereux fought at the Battle of Barnet on 14 April 1471 and Battle of Tewkesbury on 4 May 1471 where Edward IV secured his throne. He was one of the Lords who swore in the Parliament Chamber at Westminster on 3 July 1471 to accept Edward, Prince of Wales, as heir to the crown, and selected on 20 February 1472/3 as a tutor and councilor until the prince reached the age of 14 years.

Elevation to Peerage and Honors

On 26 July 1461 Walter Devereux was raised to the rank of Baron in right of his wife and on account of his great services against Henry VI, the Duke of Exeter, the Earls of Pembroke and Wiltshire, and the other rebels and traitors, thereby becoming Lord Ferrers.

On 24 April 1472 he was honored by creation as a Knight of the Garter.

Walter Devereux supported Richard III of England during his reign, and fought on his side at the Battle of Bosworth (22 August 1485). There, Lord Ferrers commanded in the vanguard under John Howard, Duke of Norfolk, alongside Sir Robert Brackenbury and Thomas Howard, Earl of Surrey. Devereux was slain during the initial fight with the opposing van under John de Vere, 13th Earl of Oxford, fighting next to the young John, Lord Zouche. An in-law, Sir John Ferrers, was also killed at Bosworth.