One of the most celebrated and dominating players in baseball history, Johnson established several pitching records, some of which remain unbroken. He remains by far the all-time career leader in shutouts with 110,[2] second in wins with 417, and fourth in complete games with 531. He once held the career record in strikeouts with 3,508 and was the only player in the 3,000 strikeout club for over 50 years until Bob Gibson recorded his 3,000th strikeout in 1974. Johnson led the league in strikeouts a Major League record 12 times—one more than current strikeout leader Nolan Ryan—including a record eight consecutive seasons.[3]

Johnson's gentle nature was legendary, and to this day he is held up as an example of good sportsmanship, while his name has become synonymous with friendly competition.

Walter Johnson was the second of six children born to Frank Edwin Johnson (1861–1921) and Minnie Olive Perry (1867–1967) on a rural farm four miles west of Humboldt, Kansas.[4] Although he was sometimes said to be of Swedish ancestry and referred to by sportwriters as the "The Big Swede", Johnson's ancestors came from the British Isles.[5]

Soon after he reached his fourteenth birthday, his family moved to California's Orange County in 1902. The Johnsons settled in the town of Olinda, a small oil boomtown located just east of Brea.[6] In his youth, the young Walter Johnson split his time between playing baseball, working in the nearby oil fields, and going horseback riding.[6] Johnson later attended Fullerton Union High School where he struck out 27 batters during a 15-inning game against Santa Ana High School.[6] He later moved to Idaho, where he doubled as a telephone company employee and a pitcher for a Weiser-based team in the Idaho State League. Johnson was spotted by a talent scout and signed a contract with the Washington Senators in July 1907 at the age of nineteen.

Johnson won renown as the premier power pitcher of his era. Ty Cobb recalled his first encounter with the rookie fastballer:

"On August 2, 1907, I encountered the most threatening sight I ever saw in the ball field. He was a rookie, and we licked our lips as we warmed up for the first game of a doubleheader in Washington. Evidently, manager Pongo Joe Cantillon of the Nats had picked a rube out of the cornfields of the deepest bushes to pitch against us. ... He was a tall, shambling galoot of about twenty, with arms so long they hung far out of his sleeves, and with a sidearm delivery that looked unimpressive at first glance. ... One of the Tigers imitated a cow mooing, and we hollered at Cantillon: 'Get the pitchfork ready, Joe—your hayseed's on his way back to the barn.' ... The first time I faced him, I watched him take that easy windup. And then something went past me that made me flinch. The thing just hissed with danger. We couldn't touch him. ... every one of us knew we'd met the most powerful arm ever turned loose in a ball park."[7]

Although a lack of precision instruments prevented accurate measurement of his fastball, in 1917, a Bridgeport, Connecticut munitions laboratory recorded Johnson's fastball at 134 feet per second, which is equal to 91.36 miles per hour (147.03 km/h), a velocity which was virtually unique in Johnson's day, with the possible exception of Smoky Joe Wood. Johnson, moreover, pitched with a sidearm motion, whereas power pitchers are normally known for pitching with a straight-overhand delivery. Johnson's motion was especially difficult for right-handed batters to follow, as the ball seemed to be coming from third base. His pitching mechanics were superb, generating powerful rotation of his shoulders with excellent balance.[8] In addition to his fastball, Johnson featured an occasional curveball that he developed around 1913 or 1914.[9] He batted and threw right-handed.

The overpowering fastball was the primary reason for Johnson's exceptional statistics, especially his fabled strikeout totals. Johnson's record total of 3,508[10] strikeouts stood for more than 55 years until Nolan Ryan, Steve Carlton, and Gaylord Perry (in that order) all surpassed it in 1983. Johnson, as of 2015, ranks ninth on the all-time strikeout list, but his total must be understood in its proper context. Among his pre-World War II contemporaries, only two men finished within one thousand strikeouts of Johnson: runner-up Cy Young with 2,803 (705 strikeouts behind) and Tim Keefe at 2,562 (946 behind). Bob Feller, whose war-shortened career began in 1936, later ended up with 2,581.

As a right-handed pitcher for the Washington Nationals/Senators, Walter Johnson won 417 games, the second most by any pitcher in history (after Cy Young, who won 511). He and Young are the only pitchers to have won 400 games.[11]

His earned run average of 1.14 in 1913 was the fourth lowest ever at the time he recorded it; it remains the sixth-lowest today, despite having been surpassed by Bob Gibson in 1968 (1.12) for lowest ERA ever by a 300+ inning pitcher. It could have been lower if not for one of manager Clark Griffith's traditions. For the last game of the season, Griffith often treated the fans to a farce game. Johnson actually played center field that game until he was brought in to pitch. He allowed two hits before he was taken out of the game. The next pitcher – who was actually a career catcher – allowed both runners to score. The official scorekeeper ignored the game, but later, Johnson was charged with those two runs, raising his ERA from 1.09 to 1.14. For the decade from 1910-1919, Johnson averaged 26 wins per season and had an overall ERA of 1.59.

Although he often pitched for losing teams during his career, Johnson finally led the Washington Nationals/Senators to the World Series in 1924, his 18th year in the American League. Johnson lost the first and fifth game of the 1924 World Series, but became the hero by pitching four scoreless innings of relief in the seventh and deciding game, winning in the 12th inning. Washington returned to the World Series the following season, but Johnson's experience was close to the inverse: two early wins, followed by a Game Seven loss.

Although his Hall of Fame plaque reads that he pitched 'for many years with a losing team,' during his career the Senators finished in the first division 11 times, and the second division 10 times. In Johnson's first five seasons, Washington finished last twice and next-to-last three times. But they finished second in the American League in both 1912 and 1913, which were Johnson's two 30-win seasons. Then, for the next decade, they typically finished in the middle of the pack before their back-to-back pennants.

Johnson was a good hitter for a pitcher, compiling a career batting average of .235, including a record .433 average in 1925. He also made 13 appearances in the outfield during his career. He hit over .200 in 13 of his 21 seasons as a hitter, hit three home runs in 1914, and hit 12 doubles and a triple in 130 at bats in 1917. Johnson finished his career with 23 home runs, the ninth-highest total for a pitcher in Major League history.

Johnson had a reputation as a kindly person, and made many friends in baseball. As reported in The Glory of Their Times, Sam Crawford was one of Johnson's good friends, and sometimes in non-critical situations, Johnson would ease up so Crawford would hit well against him. This would vex Crawford's teammate Ty Cobb, who could not understand how Crawford could hit the great Johnson so well. Johnson was also friendly with Babe Ruth, despite Ruth's having hit some of his longest home runs off him at Griffith Stadium.

In 1928, he began his career as a manager in the minor leagues, taking up residence at 32 Maple Terrace, Millburn, New Jersey, and managing the Newark Bears of the International League. He continued on to the major leagues, managing the Washington Nationals/Senators (1929–1932), and finally the Cleveland Indians (1933–1935). Johnson also served as a radio announcer on station WJSV for the Senators during the 1939 season.[15]

Walter Johnson retired to Germantown, Maryland. A lifelong Republican and friend of President Calvin Coolidge, Johnson was elected as a Montgomery County commissioner in 1938. His father-in-law was Rep. Edwin Roberts, a Republican member of the U.S. House of Representatives. In 1940 Johnson ran for a congressional seat in Maryland's 6th district, but came up short against the incumbent Democrat, William D. Byron, by a total of 60,037 (53%) to 52,258 (47%).[17]

Joseph W. Martin, Jr., before he was the Speaker of the United States House of Representatives from 1947 to 1949 and 1953 to 1955, recruited Johnson to run for Congress. "He was an utterly inexperienced speaker," Martin later said. "I got some of my boys to write two master speeches for him – one for the farmers of his district and the other for the industrial areas. Alas, he got the two confused. He addressed the farmers on industrial problems, and the businessmen on farm problems."[18] 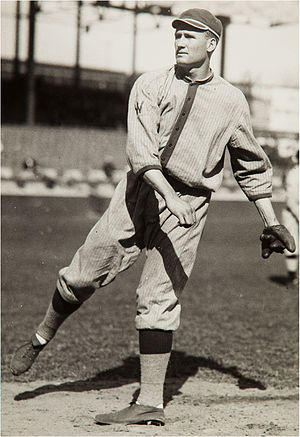 He was also called "Sir Walter", "the White Knight", and "The Gentle Johnson" because of his gentlemanly sportsmanship, and "Barney" after auto racer Barney Oldfield (he got out of a traffic ticket when a teammate in the car told the policeman Johnson was Barney Oldfield).[25]

In 1999, The Sporting News ranked Johnson number 4 on its list of Baseball's 100 Greatest Players, the highest-ranked pitcher.[26] Later that year, he was elected to the Major League Baseball All-Century Team.

In 1985 Jonathan Richman recorded the song "Walter Johnson", which dwelt on Johnson's personality and behaviour as an exemplar of what can be good in sport.[27]

In 2015, he along with Nap Lajoie, Christy Mathewson and Cy Young were named the "Greatest Pioneers Group." They were voted for by baseball fans online as part of the Franchise Four competition and were "selected as the most impactful players". The results were announced at the 2015 MLB All-Star Game.[28]

Johnson's gentle nature was legendary, and to this day he is held up as an example of good sportsmanship, while his name has become synonymous with friendly competition. This attribute worked to Johnson's disadvantage in the case of fellow Hall of Famer Ty Cobb. Virtually all batters were concerned about being hit by Johnson's fastball, and many would not "dig in" at the plate because of that concern. Cobb realized that the good-hearted Johnson was privately nervous about the possibility of seriously injuring a batter. Almost alone among his peers, Cobb would actually stand closer to the plate than usual when facing Johnson.[29]