Walter Rothschild was born in London as the eldest son and heir of Nathan Rothschild, 1st Baron Rothschild, an immensely-wealthy financier of the international Rothschild financial dynasty and the first Jewish peer in England.[3]

The eldest of three children, Walter was deemed to have delicate health and was educated at home. As a young man, he traveled in Europe, attending the university at Bonn for a year before entering Magdalene College at Cambridge. In 1889, leaving Cambridge after two years, he was required to go into the family banking business to study finance.

At the age of seven, he declared that he would run a zoological museum. As a child, he collected insects, butterflies, and other animals. Among his pets at the family home in Tring Park were kangaroos and exotic birds. As a boy, Rothschild was once dragged off his horse and assaulted by workmen while on a hunting ride near Tring, an experience that he personally attributed to Anti-Semitism.[4]

At 21, he reluctantly went to work at the family bank, N M Rothschild & Sons in London. He worked there from 1889 to 1908. Нe evidently lacked any interest or ability in the financial profession, but it was not until 1908 that he was finally allowed to give it up. However, his parents established a zoological museum as a compensation, and footed the bill for expeditions all over the world to seek out animals.

Rothschild was 6' 3" tall, suffered from a speech impediment and was very shy, but he had his photograph taken riding on a giant tortoise, and drove a carriage harnessed to six zebras to Buckingham Palace to prove that zebras could be tamed.

Though he never married, Rothschild had two mistresses, one of whom bore him a daughter.[5] 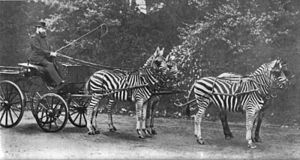 Rothschild with his famed zebra (Equus burchelli) carriage, which he drove to Buckingham Palace to demonstrate the tame character of zebras to the public 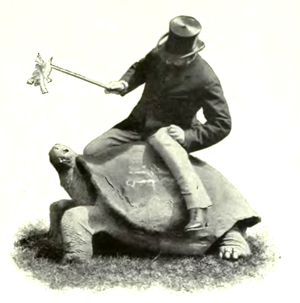 Lord Rothschild on a giant tortoise

Rothschild studied zoology at Magdalene College, Cambridge.[6] Meeting Albert Günther sparked his interest in the taxonomy of birds and butterflies.

Although Rothschild himself travelled and collected in Europe and North Africa for many years, his work and health concerns limited his range, and beginning while at Cambridge he employed others - explorers, professional collectors, and residents - to collect for him in remote and little-known parts of the world. He also hired taxidermists, a librarian, and, most importantly, professional scientists to work with him to curate and write up the resulting collections: Ernst Hartert, for birds, from 1892 until his retirement at the age of 70 in 1930; and Karl Jordan for entomology, from 1893 until Rothschild's death in 1937.

At its largest, Rothschild's collection included 300,000 bird skins, 200,000 birds' eggs, 2,250,000 butterflies, and 30,000 beetles, as well as thousands of specimens of mammals, reptiles, and fishes. They formed the largest zoological collection ever amassed by a private individual.

The Rothschild giraffe (Giraffa camelopardis rothschildi), a subspecies with five horns instead of two, was named after him. Another 153 insects, 58 birds, 17 mammals, three fish, three spiders, two reptiles, one millipede, and one worm also carry his name.

Rothschild opened his private museum in 1892. It housed one of the largest natural history collections in the world, and was open to the public. In 1932 he was forced to sell the vast majority of his bird collection to the American Museum of Natural History after being blackmailed by a former mistress.[7][8] On his death in 1937, the museum and all its contents were given in his will to the British Museum (of which the Natural History Museum, London was then a part), the greatest accession which that institution has ever received.[9] The Walter Rothschild Zoological Museum at Tring is now a division of the Natural History Museum.[10]

Rothschild was awarded an honorary doctorate by the University of Giessen in 1898, was elected a Trustee of the British Museum in 1899, and was elected a Fellow of the Royal Society in 1911.[2] 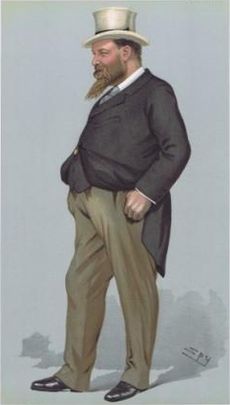 Walter Rothschild was a Conservative Member of Parliament for Aylesbury from 1899 until he retired from politics at the January 1910 general election.[9]

Despite his health, Rothschild served part-time as an officer in a Territorial Army unit, the Royal Buckinghamshire Yeomanry, being promoted Major in 1903 and retiring in 1909.[11]

Zionism and the Balfour Declaration

As an active Zionist and close friend of Chaim Weizmann, he worked to formulate the draft declaration for a Jewish homeland in Palestine. On 2 November 1917 he received a letter from the British foreign secretary, Arthur Balfour, addressed to his London home at 148 Piccadilly. In this letter the British government declared its support for the establishment in Palestine of "a national home for the Jewish people". This letter became known as the Balfour Declaration.

Walter inherited the British peerage title "Baron Rothschild" from his father Nathan Mayer Rothschild, 1st Baron Rothschild in 1915. He died in 1937 at Tring Park, Hertfordshire aged 69, and was buried in Willesden Jewish Cemetery, London. He had no legitimate children, and his younger brother Charles Rothschild had predeceased him, so the title was inherited by his nephew (Nathaniel Mayer) Victor Rothschild.