Walter Veltroni OMRI (Italian pronunciation: [ˈvalter velˈtroːni]; born 3 July 1955) is an Italian writer, film director, journalist, and politician, who served as the first leader of the Democratic Party within the centre-left opposition, until his resignation on 17 February 2009.[1] He served as Mayor of Rome from June 2001 to February 2008.

Veltroni was born in Rome. His father, Vittorio Veltroni, an eminent RAI manager in the 1950s, died only one year later.[2] His mother, Ivanka Kotnik, was the daughter of Ciril Kotnik, a Slovenian diplomat at the Holy See who helped numerous Jews and anti-fascists to escape Nazi persecution after 1943.[3]

Veltroni, a professional journalist, was editor-in-chief of L'Unità, the newspaper of the Democratic Party of the Left from 1992 to 1996. He then ran as one of the leading members of The Olive Tree coalition in the 1996 general election. After The Olive Tree's victory, he served as Deputy Prime Minister and Minister for Cultural Assets and Activities from 1996 to 1998, joining 25 other PDS members in cabinet–the first (former) Communists to take part in government since 1947. Also in 1996, he attended the Bilderberg Meeting. In 1998, he resigned, subsequent to his election as National Secretary of the Democrats of the Left (DS). Despite his background as a journalist, he has been involved in controversial episodes related to freedom of expression. For example, in 2001, after the late night show Satyricon aired an interview that discussed indictments on links between the right-wing leader and the mafia, Marco Travaglio reported that Veltroni dispatched a messenger menacing the closure of the show.[4]

In 2001, Veltroni resigned as leader of the party after being elected Mayor of Rome. In May 2006, Veltroni was confirmed Mayor of Rome, easily defeating former Minister of Agriculture Gianni Alemanno, of National Alliance, obtaining an unprecedented 61.4% of the valid votes against the 37.1% achieved by his main opponent. The percentage of votes that supported Veltroni's second term in office was a record in local elections in Rome. Shortly before this confirmation, Veltroni had declared that he was going to leave politics at the end of his second term as Mayor.[citation needed]

In 2005, as mayor of Rome, he met in Washington, during a visit to the United States, then United States Senator (D-IL), Barack Obama,[5] being one of his earliest supporters overseas.[6] He wrote the preface to the Italian edition of The Audacity of Hope in 2007[7] and has been referred to as "Obama's European counterpart".[8] 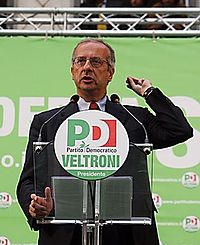 Veltroni during the electoral campaign.

Veltroni was then widely considered one of the most popular centre left politicians in Italy, and often singled out for the leadership of the Democratic Party, despite his statements that he would not accept such position after his tenure as Mayor would end. In June 2007, DS leader Piero Fassino publicly asked Veltroni to run for the party leadership, offering support from all of his party. Several other Democratic Party leading members publicly stated their support for a possible candidacy of Veltroni. Furthermore, the strongest of his possible contenders, Pier Luigi Bersani, which polls showed as having a 50% support in center-north regions,[9] withdrew to avoid a 'confusing candidacy'.[10] Veltroni officially presented his candidacy for the leadership of the Democratic Party at a rally in Turin on 27 June 2007. At this occasion, he introduced the four key issues his programme would address: environment, generational pact, education, and public security.[11]

Leader of the Democratic Party

Veltroni was elected as the first leader of the newly founded Democratic Party on 14 October 2007, winning an open primary with around 2.6 million votes, or 75.8%.[12]

In 2007, Veltroni had some remarks against the Romanian immigrants, claiming that Italy has become "unlivable" since Romania joined the European Union,[13] while before its entry, Rome was "the safest city in the world", bringing accusations of xenophobia from the Romanian press.[14]

Following the defeat of Prodi's government in a January 2008 Senate vote,[15] Veltroni led the Democratic Party into the April 2008 general election. Veltroni resigned as Mayor of Rome on 13 February 2008 to concentrate on the campaign.[16]

He has been criticised for his over-frequentation of Rome socialites, and advised to focus on more practical problems.[17]

On 17 February 2009, following clashes within the party and only a day after a heavy defeat of the Democratic Party in a local regional election in Sardinia,[18] Veltroni announced his immediate resignation from his leadership post.[1] The Constituent Assembly of the party subsequently convened on 21 February 2009 and elected Veltroni's former deputy Dario Franceschini as the new secretary.[19]

In 2003, he received an honoris causa degree in Public Services by the John Cabot University of Rome. In 2006, Veltroni received the title of Cavaliere di Gran Croce (Knight of the Grand Cross) from President of the Italian Republic Carlo Azeglio Ciampi. He won the America Award of the Italy-USA Foundation in 2009.[25]

Veltroni has written a number of books on various topics, such as music, social issues, fiction, biographies and politics.

Script error: The function "top" does not exist. Template:Deputy Prime Ministers of Italy