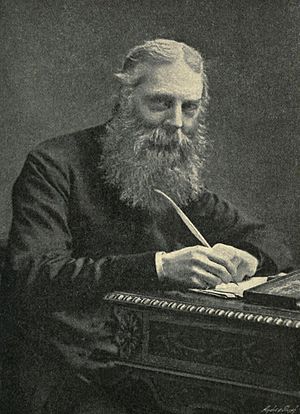 Walter William Skeat (21 November 1835 – 6 October 1912), FBA, was the pre-eminent English philologist of his time, and was instrumental in developing English as a higher education subject in the United Kingdom.

Skeat was born in London and educated at King's College School (Wimbledon), Highgate School, and Christ's College, Cambridge, of which he became a fellow in July 1860.[1]

In 1860 Skeat was ordained an Anglican deacon, married, and became a curate in December 1860 at East Dereham, where he served during the year 1861 and most of 1862. In 1862–1863 he was a curate at Godalming. In October 1864 he returned to Cambridge as a mathematical lecturer, remaining in this capacity until 1871.

Skeat developed an interest in the history of English, and by his own account was at first mainly guided in the study of Chaucer by Henry Bradshaw, with whom he was to have participated in the edition of Chaucer planned in 1870 by the University of Oxford, having declined in Bradshaw's favour an offer of the editorship made to himself. (Bradshaw's perseverance was not equal to his genius, and the scheme came to nothing for the time, but was eventually resumed and carried into effect by Skeat in an edition of six volumes (1894), a supplementary volume of Chaucerian Pieces being published in 1897.)

In 1878 he was elected Elrington and Bosworth Professor of Anglo-Saxon at Cambridge. He completed Mitchell Kemble's edition of the Anglo-Saxon Gospels, and did much other work both in Anglo-Saxon and in Gothic, but is perhaps most generally known for his labours in Middle English, and for his standard editions of Chaucer and William Langland's Piers Plowman.

He is buried at the Parish of the Ascension Burial Ground in Cambridge; his wife, Bertha Clara, was born 6 February 1840, died 15 July 1924 is buried with him, as is a daughter Bertha Marian, born 30 December 1861, died 2 December 1948. His son was the anthropologist Walter William Skeat. His grandsons include the noted palaeographer T. C. Skeat and the stained glass painter Francis Skeat.[4]

In pure philology, Skeat's principal achievement is his Etymological English Dictionary (4 parts, 1879–1882; rev., and enlarged, 1910). While preparing the dictionary he wrote hundreds of short articles on word origins for the London-based journal Notes and Queries. He also coined the term ghost word and was a leading expert in this treacherous and difficult subject.[5] Skeat was also a pioneer of place-name studies. Major publications in this field include:

Skeat edited a large number of medieval texts, often providing the first and sometimes only modern edition. His The Holy Gospels in Anglo-Saxon, Northumbrian, and Old Mercian Versions was published in 1871; his edition of Chaucer's A Treatise on the Astrolabe in 1872;[6] and his edition of Piers Plowman in three parallel texts in 1886. He published an edition of The Complete Works of Geoffrey Chaucer in 1894–97.[7] Skeat edited numerous other works for the Early English Text Society, including the Bruce of John Barbour, Pierce the Ploughman's Crede, and the romances of Havelok the Dane and William of Palerne. For the Scottish Text Society he edited The Kingis Quair, and he published an edition (2 vols., 1871) of Chatterton, with an investigation of the sources of the obsolete words employed by him. Skeat also issued an edition of Chaucer in one volume for general readers, and a separate edition of his Treatise on the Astrolabe, with a learned commentary.

Skeat produced what is still the main edition of Ælfric of Eynsham's Lives of the Saints;[8] the edition includes translations which were largely the work of two women referred to as Mss Gunning and Wilkinson, who were credited in the preface to his edition.[9]

According to A. J. Wyatt, Skeat 'was not a great teacher ... he left the teaching to those who had learned from him'---i.e. Wyatt himself and Israel Gollancz---'his teaching was episodic. Yet his lectures were eagerly followed by the fit though few; they were always interesting when least utilitarian, when he forgot examinations and syllabuses, and poured forth from the quaint storehouse of his motley memory things new and old'.[10]

Skeat was one of the very few scholars in English studies who had sufficient expertise to compete with the state-employed and tenured colleagues from German universities. Like Henry Sweet, he regarded Geoffrey Chaucer and other medieval English authors as part of his national heritage and objected to the numerous German professors' incursions into English textual territory. Frustrated by the successes of his German counterparts, he exclaimed, sarcastically, that though perhaps "to some extent disqualified, as being merely a native of London, in which city Chaucer himself was born," he should be allowed to contribute scholarship on the father of English poetry without constant German interference.[11]