From Infogalactic: the planetary knowledge core
Jump to: navigation, search
This article is about the lord of Meath and Ludlow. For other uses, see Walter de Lacy (died 1085). 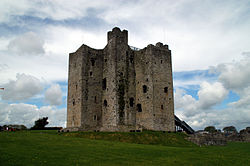 The keep of Trim Castle 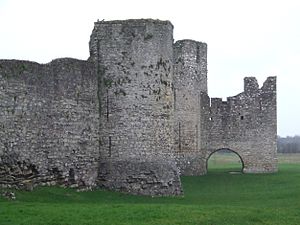 Walter de Lacy (c. 1172–1241) was Lord of Meath in Ireland. He was also a substantial land owner in Weobley, Herefordshire, in Ludlow, Shropshire, in Ewyas Lacy in the Welsh Marches, and several lands in Normandy.[1] He was the eldest son of Hugh de Lacy, a leading Cambro-Norman baron in the Norman invasion of Ireland.

During the revolt of Prince John Lackland, Lord of Ireland, against his brother, King Richard the Lionheart, in 1193-94, Walter joined with John de Courcy to support Richard. Walter apprehended some knights loyal to John along with Peter Pipard, John's justiciar in Ireland.[2] Walter did homage to Richard for his lands in Ireland in 1194, receiving his lordship of Meath.[2] After mounting the throne of England in 1199, John wrote to his justiciar in Ireland to complain that de Courcy and de Lacy had destroyed John's land of Ireland.[2] Walter had made John his enemy.[2]

In 1203, John granted custody of the city of Limerick to Walter's father-in-law, William de Braose, 4th Lord of Bramber.[3] As de Braose was an absentee, Walter served as de Braose's deputy in Limerick.[3]

In 1206-07, Walter became involved in a conflict with Meiler Fitzhenry, Justiciar of Ireland, and Walter's feudal tenants for lands in Meath; Meiler had seized Limerick.[3] King John summoned Walter to appear before him in England in April, 1207.[4] After Walter's brother Hugh de Lacy, 1st Earl of Ulster, had taken Meiler FitzHenry prisoner, John in March, 1208 acquiesced in giving Walter a new charter for his lands in Meath.[4] Upon his return to Ireland later in 1208, Walter may have acted as Justiciar of Ireland in lieu of the deposed Meiler fitz Henry.[5] By this time, John had begun his infamous persecution of Walter's father-in-law, de Braose, who fled to Ireland.[5]

On 20 June 1210, King John landed in Crook, now in Co. Waterford, with his feudal levy and a force of Flemish mercenaries; John marched north through Leinster.[5] When John reached Dublin on 27 or 28 June, Walter attempted to throw himself on John's mercy, sending five of his tenants to Dublin to place his lands in Meath back in the king's hand, and disclaiming any attempt to shelter his brother Hugh from John's wrath.[6] John attacked eastern Meath, and was joined by 400 of Walter's deserting followers.[6] John would hold Walter's lands in Meath for five years.[7]

In 1211 Walter erected the castle on Turbet Island in the abortive Anglo-Norman attempt to gain control of West Ulster.

Attempting to secure support in Ireland against the brewing revolt that would lead to Magna Carta, John began negotiations to restore Walter to his lands in Meath in the summer of 1215.[7]

Walter was Sheriff of Herefordshire from 1218 to 1222. In 1230 he joined with Geoffrey de Marisco and Richard Mór de Burgh to subdue Aedh mac Ruaidri Ó Conchobair, King of Connacht.

He was a benefactor to the abbeys of Lanthony and Craswall (Herefordshire) and also founded the abbey of Beaubec in Ireland.

On his death his estate was divided between his granddaughters Margery and Maud.

He married Margaret de Braose, the daughter of William de Braose, 4th Lord of Bramber and Maud de St. Valery and had issue.