From Infogalactic: the planetary knowledge core
(Redirected from Walther's law)
Jump to: navigation, search
For other uses, see facies (disambiguation). 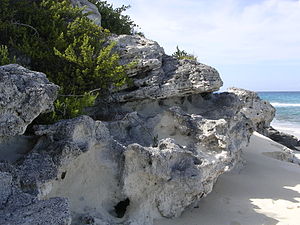 In geology, a facies (pronounced variously as /ˈfeɪʃiːz/, /ˈfeɪsiːz/ or /ˈfæʃiːz/ ['faysheez', 'fayseez' or 'fash-eez']; plural also 'facies') is a body of rock with specified characteristics.[1] Ideally, a facies is a distinctive rock unit that forms under certain conditions of sedimentation, reflecting a particular process or environment.

The term facies was introduced by the Swiss geologist Amanz Gressly in 1838 and was part of his significant contribution to the foundations of modern stratigraphy,[2] which replaced the earlier notions of Neptunism. 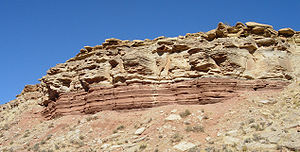 These facies types are usually further subdivided, for example, you might refer to a "tan, cross-bedded oolitic limestone facies" or a "shale facies". The characteristics of the rock unit come from the depositional environment and original composition. Sedimentary facies reflect depositional environment, each facies being a distinct kind of sediment for that area or environment.

Since its inception, the facies concept has been extended to related geological concepts. For example, characteristic associations of organic microfossils, and particulate organic material, in rocks or sediments, are called palynofacies. Discrete seismic units are similarly referred to as seismic facies.

File:IsfjordenSuperposition.jpg Walther's Law of Facies, or simply Walther's Law, named after the geologist Johannes Walther, states that the vertical succession of facies reflects lateral changes in environment. Conversely, it states that when a depositional environment "migrates" laterally, sediments of one depositional environment come to lie on top of another.[3] In Russia the law is known as Golovkinsky-Walther’s Law honoring also Nikolai A. Golovkinsky.[4] A classic example of this law is the vertical stratigraphic succession that typifies marine transgressions and regressions.

The sequence of minerals that develop during progressive metamorphism (that is, metamorphism at progressively higher temperatures and/or pressures) define a facies series.