Walther Funk (18 August 1890 – 31 May 1960) was an economist and prominent Nazi official who served as Reich Minister for Economic Affairs from 1938 to 1945 and was tried and convicted as a major war criminal by the International Military Tribunal at Nuremberg.

Funk was born into a merchant family in 1890 in Danzkehmen (present-day Sosnowka in the Russian Kaliningrad Oblast) near Trakehnen in East Prussia. He was the only one of the Nuremberg defendants who was born in the former eastern territories of Germany. He was the son of Wiesenbaumeister Walther Funk the elder and his wife Sophie (née Urbschat). He studied law, economics, and philosophy at the Humboldt University of Berlin and the University of Leipzig. In the First World War, he joined the infantry, but was discharged as unfit for service in 1916. In 1920, Funk married Luise Schmidt-Sieben. Following the end of the first war, he worked as a journalist, and in 1924 he became the editor of the centre-right financial newspaper the Berliner Börsenzeitung. 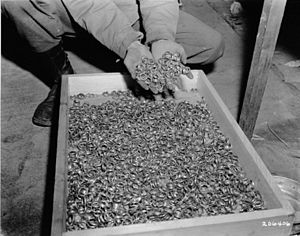 As Minister of Economics, Funk accelerated the pace of rearmament and as Reichsbank president banked for the SS the gold rings of Nazi concentration camp victims 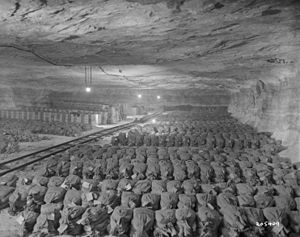 Nazi gold in Merkers Salt Mine 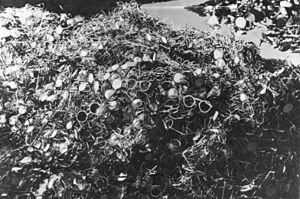 Eyeglasses of victims from Auschwitz 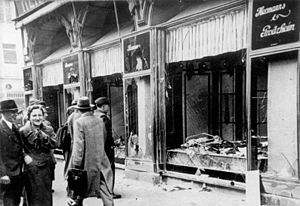 Funk, who was a nationalist and anti-Marxist, resigned from the newspaper in the summer of 1931 and joined the Nazi Party, becoming close to Gregor Strasser, who arranged his first meeting with Adolf Hitler. Partially because of his interest in economic policy, he was elected a Reichstag deputy in July 1932, and within the party, he was made chairman of the Committee on Economic Policy in December 1932, a post that he did not hold for long. After the Nazi Party came to power, he stepped down from his Reichstag position and was made Chief Press Officer of the Third Reich.

In March 1933, Funk was appointed as a State Secretary (Staatssekretär) at the Ministry of Public Enlightenment and Propaganda (Reichsministerium für Volksaufklärung und Propaganda). In 1938, he assumed the title of Chief Plenipotentiary for Economics (Wirtschaftsbeauftragter). He also became Reich Minister of Economics (Reichswirtschaftsminister) in February 1938, replacing Hjalmar Schacht, who had been dropped in November 1937. Schacht had been dismissed in a power struggle with Reichsmarschall Hermann Göring, who was quick to tie the ministry more closely to his Four Year Plan Office.

Funk was closely involved in the theft and disposal of the property of German Jews from this time. He boasted that by 1938, the German state had managed to steal Jewish property worth two million marks, using decrees from Hitler and other top Nazis to force German Jews to leave their property and assets to them if they emigrated. They were forced by Göring to pay for the damage caused by the Nazis to their own property on Kristallnacht, and increasingly deprived of their personal wealth and assets as the Second World War approached. They were ultimately murdered in the many death camps, Nazi concentration camps and Ghettoes established by the Nazis.[1] Before their incarceration, they were stripped of any valuables, such as property and other assets, personal property such as paintings and other fine art, jewelry and any currency or gold. If they were lucky, they may have lived briefly as slave laborers, but generally were destined to be murdered in gas chambers or by a bullet in the back of the head. Any other personal items such as clothing, and shoes were stolen before their murder, and false teeth, gold teeth and any other personal items not already stolen, were taken from their corpses. Their hair was shorn either just before their murder by gassing with Zyklon B or just after their death. Their bodies were then burnt in crematoria, and their ashes dispersed.

In January 1939, Hitler appointed Funk as President of the Reichsbank, again replacing Schacht, and this way he became also a member of the board of directors of the Bank for International Settlements, based in Switzerland.[2] He was appointed to the Central Planning Board in September 1943.

Despite poor health, Funk was tried with other Nazi leaders at the Nuremberg trials. Accused of conspiracy to commit crimes against peace; planning, initiating and waging wars of aggression; war crimes and crimes against humanity, he argued that, despite his titles, he had very little power in the regime. At the Nuremberg trials American Chief Prosecutor Jackson labeled Funk as "The Banker of Gold Teeth", referring to the practice of extracting gold teeth from Nazi concentration camp victims, and forwarding the teeth to the Reichsbank for melting down to yield bullion. Many other gold items were stolen from victims, such as jewelry, eyeglasses and gold finger rings.[3] Göring described Funk as "an insignificant subordinate," but documentary evidence and his wartime biography Walther Funk, A Life for Economy were used against him during the trial, leading to his conviction on counts 2, 3 and 4 of the indictment and his sentence of life imprisonment.

Funk was held at Spandau Prison along with other senior Nazis. He was released on 16 May 1957 because of ill health. He made a last-minute call on Rudolf Hess, Albert Speer and Baldur von Schirach before leaving the prison.[4] He died three years later in Düsseldorf of diabetes.