Walter Karl Ernst August von Reichenau (8 October 1884 – 17 January 1942) was a German war criminal, officer and Generalfeldmarschall during World War II. He issued the notorious Severity Order which encouraged German soldier to murder Jewish civilians on the eastern front, and he was in charge of forces which helped to commit the massacre of over 33,000 Jews at Babi Yar as well as other massacres during the holocaust.

Reichenau was born in Karlsruhe, in the Grand Duchy of Baden, into an aristocratic Prussian family, the son of Ernst August von Reichenau (1841–1919), who later became a Lieutenant General. Throughout the 19th and early 20th centuries the Reichenau family owned and operated one of the largest furniture factories in Germany. Having passed the Abitur examination, Reichenau joined the Prussian Army in 1903.

During the First World War, Reichenau served on the Western Front as adjutant in the 1st Guards Field Artillery Regiment (1st Guards Infantry Division). He was awarded the Iron Cross Second and First Class and already by 1914 had been promoted to the rank of captain. From 1915 he served as Second General Staff officer (Ib) of the 47th Reserve Division and then as First General Staff officer (Ia) of the 7th Cavalry Division. After the Armistice of 11 November 1918, he joined the Grenzschutz Ost Freikorps units in Upper Silesia and Pomerania.

In 1919 Reichenau was selected to remain in the newly established Reichswehr, the army of 96,000 men that Germany was allowed to maintain under the terms of the Treaty of Versailles. The officer corps of the new Reichswehr was limited to 4,000, and there was to be no German General Staff. Reichenau took a post in the Truppenamt, which was the "underground" equivalent of the General Staff formed by Hans von Seeckt. From 1931 Reichenau was Chief of Staff to the Inspector of Signals at the Reichswehr Ministry, and later served with General Werner von Blomberg in East Prussia. Here he supported Blomberg in the development of new tactics to put into practice the concept of mobile warfare that had shown promise at the end of the First World War. Reichenau had much of the written work of British tank proponents, including B. H. Liddell Hart and J. F. C. Fuller, translated into German.[1] 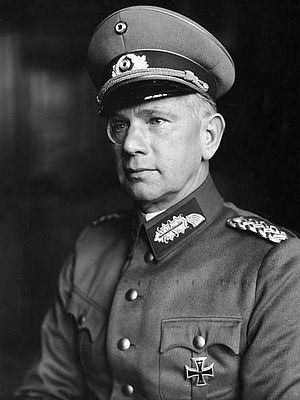 Reichenau's uncle was an ardent Nazi and introduced him to Adolf Hitler in April 1932. Reichenau joined the Nazi Party, although doing so was a violation of the army regulations laid down by Seeckt to insulate the army from national politics.[2]

In 1938, records indicate, the family "donated" its furniture factory outside Karlsruhe to the Nazi Party,[citation needed] and it was transformed into a munitions plant. During Allied attacks in 1945, this factory was destroyed in an air raid.

Reichenau married Alix, a daughter of the Silesian Count Andreas von Maltzan. During the war, Alix's sister Maria (Marushka) hid her Jewish lover Hans Hirschel from the Gestapo in her Berlin flat; Reichenau knew this and visited them there. Maria also worked to hide underground Jews and political dissidents, sustain them, or help them escape from Germany.[3]

When Hitler came to power in January 1933, Blomberg became Minister of War and Reichenau was appointed as head of the Ministerial Office, acting as liaison officer between the Army and the Nazi Party. He played a leading role in persuading Nazi leaders such as Göring and Himmler that the power of Ernst Röhm and the SA must be broken if the army was to support the Nazi-led government. This led directly to the "Night of the Long Knives" of 30 June 1934.

In 1935 Reichenau was promoted to lieutenant general (Generalleutnant) and was also appointed to command the military forces in Munich. In 1938, after the Blomberg-Fritsch Affair, in which General Werner von Fritsch was forced out of the Army command, Reichenau was Hitler's first choice to succeed him, but older leaders such as Gerd von Rundstedt and Ludwig Beck refused to serve under Reichenau, and Hitler backed down. Reichenau's enthusiastic Nazism repelled many of the generals who would not oppose Hitler but who did not care for Nazi ideology.

Reichenau strongly opposed the German invasion of the Soviet Union. Nevertheless, as commander of the Sixth Army, he led his army into the heart of Russia during the summer of 1941. The Sixth Army was a part of Army Group South, and captured Kiev, Belgorod, Kharkov and Kursk. In September 1941, Reichenau reportedly wrote to Adolf Hitler to suggest that Ukrainians and White Russians, who initially viewed the German army as liberators, should be recruited to fight against the Bolsheviks. Hitler rejected this idea, telling Reichenau to stop interfering in political matters. Later that month Reichenau wrote again to Hitler on this subject, warning him of the dangers of large-scale partisan warfare in the Soviet Union. His advice was ignored, but his persistence in challenging Hitler's opinion was noted. 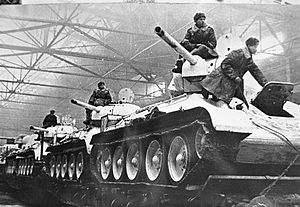 T-34 tanks headed to the front

During its offensive into Russia, the German army was confronted with a number of superior tank designs. Reichenau inspected the Soviet tanks he came across, entering each tank and measuring its armour plate. According to general staff officer Paul Jordan, after examining a T-34, Reichenau told his officers "If the Russians ever produce it on an assembly line we will have lost the war."[4]

Reichenau supported the work of the SS Einsatzgruppen in exterminating the Jews in the occupied Soviet territories. On 19 December 1941, Hitler sacked Walther von Brauchitsch as Commander-in-Chief and tried to appoint Reichenau to the post. But again the senior Army leaders rejected Reichenau as being "too political", and Hitler appointed himself instead.

On 15 January 1942 Reichenau suffered a hemorrhagic stroke after a trail run in harsh cold weather, and it was decided to fly him from Poltava to a hospital in Leipzig, Germany. He is often said to have been killed in a plane crash in Russia, although Görlitz writes that the plane merely made an emergency landing in a field and that Reichenau actually died of a heart attack. His death coincided with a propaganda offensive conducted by the Polish underground, Operation Reichenau, the goal of which was to discredit Reichenau, in the eyes of the German leadership, as a man who had allegedly been plotting to overthrow the Nazi régime, thus sowing distrust between the Nazi political leadership and its military command and punishing one of the German generals responsible for war crimes in Poland. The coincidence of such propaganda with Reichenau's death became a fertile ground for conspiracy theories, which allege that Reichenau might actually have been killed by the Nazi secret services.

Politically, Reichenau was an anti-Semite who equated Jewry with Bolshevism and the perceived Asian threat to Europe. The infamous "Reichenau Order" or Severity Order of October 1941 paved the way for mass murder by instructing the officers thus:

"In this eastern theatre, the soldier is not only a man fighting in accordance with the rules of the art of war... For this reason the soldier must learn fully to appreciate the necessity for the severe but just retribution that must be meted out to the subhuman species of Jewry...".[5]

All Jews were henceforth to be treated as de facto partisans, and commanders were directed that they be either summarily shot or handed over to the Einsatzgruppen execution squads of the SS-Reichssicherhauptamt as the situation dictated.[5] Upon hearing of the Severity Order, Reichenau's superior Field Marshal Gerd von Rundstedt expressed "complete agreement" with it, and sent out a circular to all of the Army generals under his command urging them to send out their own versions of the Severity Order, which would impress upon the troops the need to exterminate Jews.[6] During the Nuremberg trials, however, Rundstedt denied any knowledge of that order before his capture by the Allies, although he acknowledged that Reichenau's orders "may have reached my army group and probably got into the office".[7] Some historians such as de (Walter Görlitz) have sought to defend Reichenau, summarizing the above order as "demanding that the troops keep their distance from the Russian civilian population."[citation needed]