From Infogalactic: the planetary knowledge core
Jump to: navigation, search
For other uses, see Wand (disambiguation). 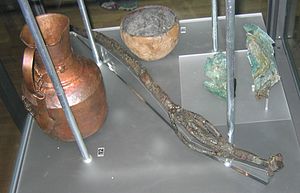 An 82 cm long wand of iron with bronze details and a unique model of a house on the top. It was discovered in a Völva's grave in Köpingsvik, Öland. There is also a pitcher from Persia or Central Asia, and a West European bronze bowl. Dressed in a bear pelt, she had received a ship burial with both human and animal sacrifice. The finds are on display in the Swedish Museum of National Antiquities in Stockholm.

A wand (sometimes magic wand) is a thin, hand-held stick or rod made of wood, stone, ivory, or metals like gold or silver. Generally, in modern language, wands are ceremonial and/or have associations with magic but there have been other uses, all stemming from the original meaning as a synonym of rod and virge, both of which had a similar development. A stick giving length and leverage is perhaps the earliest and simplest of tools. Long versions of the magic wand are usually styled in forms of staves or scepters, often with designs or an orb of a gemstone forged on the top.

In ecclesiastical and formal government ceremonial, special officials may carry a wand of office or staff of office representing their power. Compare in this context the function of the ceremonial mace, the sceptre, and the staff of office. Its age may be even greater, as Stone Age cave paintings show figures holding sticks, which may be symbolic representations of their power.[1]

The magic wand can also symbolize "tool"-ness. A wand isn't an actual physical tool (e.g. a gun, hammer, screwdriver, etc.) with practical physical functions, but it can aid the user to manipulate the world around them. Following an occult definition of magic— "the Science and Art of causing Change to occur in conformity with Will"— the wand represents the means by which the Will causes the conformity.

It points to the hard problem of consciousness— that from seemingly material reality, subjective conscious experiences arise. That immaterial minds can affect material reality is "real magic"— a mystery even in the modern day. Stage magicians ritually break a wand when a fellow magician dies. 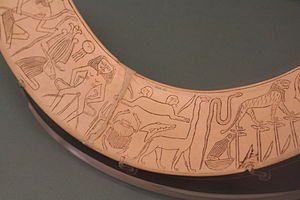 Ancient Egyptian wand. From the collection of the Brooklyn Museum.

In Pharaonic Egypt, toilette articles, weapons against possible enemies, amulets against serpents, were also left in the tomb, together with magic texts and a magic wand which enabled the ba (soul) to use them.

In classical Greco-Roman mythology, the god Hermes/Mercury has a special wand called a caduceus.

Six to eight-foot-long staves with metal tips adorning them are carried traditionally in Freemasonry during rituals of the Craft. Ceremonial uses may have several wands for different purposes, such as the Fire Wand and the Lotus Wand in the Hermetic Order of the Golden Dawn. In Zoroastrianism, there is a similar ritual implement called a barsom. In Wicca and Ceremonial magic, practitioners use several magical tools including wands for the channeling of energy—they serve a similar purpose to the athame although the two have their distinct uses. While an athame is generally used to command, a wand is seen as more gentle and is used to invite or encourage. Though traditionally made of wood, they can also consist of metal or crystal. Practitioners usually prune a branch from an Oak, Hazel, or other tree, or may even buy wood from a hardware store, and then carve it and add decorations to personalize it; one can also purchase ready-made wands. In Wicca the wand usually represents the element air, or sometimes fire, although contemporary wand makers also create wands for the elements of earth and water. The wand is most often used by Neopagans, Wiccans, Shamans and others in rituals, healing and spell casting.

There is some scholarly opinion that the magic wand may have its roots as a symbol of the phallus. It may also have originated as the drumming stick of a shaman, especially in Central Asia and Siberia, as when using it to bang on his drum or to point, to perform religious ceremonies, for healing, and in magical ceremonies.[2]

"Wands" is also another name for the suit of Staves, Batons or Rods, a suit of the minor arcana of the Tarot. It is normally associated with the element of fire, representing creative energy, passion, confidence, and charisma. 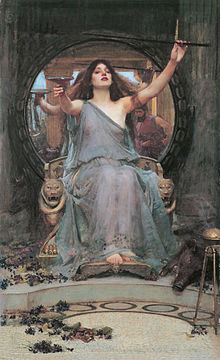 Circe with her magical wand, painting by John William Waterhouse

The earliest magical wand or staff in Western literary canon appears in the Odyssey: that of Circe, who uses it to transform Odysseus's men into wild beasts. Italian fairy tales put them into the hands of the powerful fairies by the late Middle Ages.[5] In the ballads such as Allison Gross and The Laily Worm and the Machrel of the Sea, the villainesses use silver wands to transform their victims.[6] In The Chronicles of Narnia: The Lion, the Witch and the Wardrobe, the White Witch's most feared tool is her wand, whose magic is capable of turning people into stone.

Magic wands commonly feature in works of fantasy fiction as spell-casting tools. Few other common denominators exist, so the capabilities of wands vary wildly. Note that wands fill basically the same role as wizards' staffs, though staffs generally convey a more 'serious' image;[citation needed] a fairy godmother would often use a wand, possibly with a star or some form of decoration on the end, while Gandalf would most likely not (however, in The Hobbit, he is said to use a wand, referring to his staff, to fight the goblins of the Misty Mountains and their Wargs).[clarification needed] Gandalf's name is Northern Mannish (one of Tolkien's invented languages, similar to North Germanic languages) for "Elf of the Wand", a reference to the staff he carries. In dramatic fiction, wands can serve as weapons in magical duels. Personal wands are common in the fictional world of J. K. Rowling's Harry Potter, as necessary tools to channel out each character's magic; it is the wand that chooses its owner. A wand is also present in the Children of the Red King series in the possession of Charlie Bone as well as the popular MMORPG World of Warcraft where caster classes such as the mage and warlock use wands offensively.