From Infogalactic: the planetary knowledge core
Jump to: navigation, search
This is a Chinese name; the family name is Wang.

Wang Chongyang (11 January 1113 – 22 January 1170) [Chinese calendar: 22nd day, 12th month, 2nd year, Zhenghe era in the reign of Emperor Huizong of Song - 4th day, 1st month, 10th year, Dading era in the reign of Emperor Shizong of Jin[1]] was a Chinese Taoist and one of the founders of the Quanzhen School in the 12th century during the Song dynasty. He was one of the Five Northern Patriarchs of Quanzhen. He also appears as a character in works of wuxia fiction.

Wang was born with his birth name as "Zhongfu" in a wealthy family in 1113. He was educated in Chinese classics and martial arts.

Wang intended to start a rebellion against the Jurchen Jin dynasty, which conquered northern China in the Jin–Song Wars.[2] According to tradition, in the summer of 1159 when he was 48, he met two Taoist immortals in a tavern, Zhongli Quan and Lü Dongbin. They trained him in secret forms of Taoism. He changed his name to "Zhe" and adopted the Taoist name "Chongyang".

In 1160, Wang met one of the immortals again and was provided with a set of written instructions called "Ganshui Xianyuan Lu". Those written instructions included the names of two men who would later become his disciples (Ma Yu and Tan Chuduan). Wang built a tomb for himself near Mount Zhongnan and called it "Tomb of the Living Dead". He lived in it for three years.

At the end of the three years, Wang filled the tomb with earth and built a hut on top of it and called it "Complete Perfection Hut". He spent the next four years in the hut studying Taoism and imparting his knowledge to others. During that time, he met Tan Chuduan, who became his disciple after he cured Tan from illness. Qiu Chuji and Tan traveled around the local towns and villages with Wang and founded five Taoist congregations. Wang's teachings were referred to the "Teachings of the Complete Perfection" (after the hut) and his branch of Taoism became known as the Quanzhen School.

In 1167, Wang burnt down the hut and travelled east to Shandong, where he met Ma Yu and Ma's wife, Sun Bu'er. They became his disciples as well. He accepted a total of seven disciples who later became known as "Seven Masters of Quanzhen" or "Seven Elders of Quanzhen". They are also called the "Seven Immortals" or "Seven Perfected Beings".

In 1187, Emperor Shizong of Jin summoned Wang's disciple Wang Chuyi (and, according to some sources, also Qiu Chuji) to preach in his inner palace. Later, he requested the presence of Wang Chuyi at his deathbed.[2] Shizong's successor, Emperor Zhangzong, banned the teaching of Quanzhen Taoism. He considered them as causing heretical and detrimental to society;[2]He converted to Quanzhen's teachings later and let Wang Chuyi stay in Yanjing (present-day Beijing) for a year.[2] Shizong's grandson Wanyan Shou later wrote a biography for Wang Chongyang.[2]

Wang was the author of many poems of Taoist instruction. According to legend, Liu Chuxuan became a follower of Wang after reading one of Wang's poems. 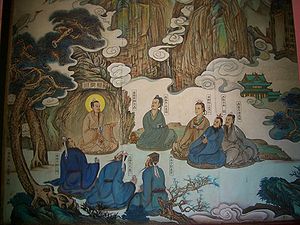 The most notable ones among Wang's seven disciples were Sun Bu'er and Qiu Chuji. Sun's husband, Ma Yu, was one of the seven, while she became an important role model for female Taoists. Ma Yu later succeeded Wang as the leader of the Quanzhen School.

Qiu Chuji gained the favour of Genghis Khan and founded the White Cloud Monastery in Beijing. Genghis Khan granted tax-exempt status to all Quanzhen schools and placed Qiu in charge of all religions in China.

Each of the seven disciples founded his or her own lineage of Quanzhen Taoism. They are as follows:

Wang appears as a character in the novel The Legend of the Condor Heroes and its sequel The Return of the Condor Heroes, both written by Jin Yong (Louis Cha). Although he is only mentioned by name, he is credited as the "Central Divine" (中神通) of the Five Greats (五絕), the top five champions of the first martial arts contest on Mount Hua. He is depicted as a patriotic Taoist of the predominantly-Han Chinese society of the Song Empire, and seeks to protect his people from the Jurchen Jin dynasty's invasion of northern China. He founds the Quanzhen Sect, based in Chongyang Palace on Mount Zhongnan, with the aim of grooming and nurturing Taoists, who are trained in martial arts, to serve the country and uphold justice. After Wang's death, his seven students, known as the "Seven Immortals of Quanzhen", inherit his legacy and promote Quanzhen to become one of the leading orthodox sects in the wulin (martial artists' community).

The sequel provides a glimpse into Wang's romance with Lin Chaoying, founder of the Ancient Tomb Sect. In his earlier life, Wang had an ancient tomb built at Mount Zhongnan, intended to serve as a secret base of operations for the battles against the Jurchens. He lost to Lin in a martial arts contest and had to abide by his promise to give up the tomb to her and become a Taoist. Wang and Lin remain rivals for the rest of their lives, constantly innovating new martial arts techniques to defeat each other. However, Yang Guo and Xiaolongnü discover later that Lin apparently hates Wang but actually still loves him. This is evident from the fact that although Lin's martial arts seem to counter Wang's, they actually complement his skills.

In the manhua series Oriental Heroes by Hong Kong artist Wong Yuk-long, Wang Chongyang is noted as the creator of the 'Nine Solar Art'.