Wapping (/ˈwɒpɪŋ/ WOP-ing) is a district in East London, England, in the London Borough of Tower Hamlets. It is situated between the north bank of the River Thames and the ancient thoroughfare simply called The Highway. Wapping's proximity to the river has given it a strong maritime character, which it retains through its riverside public houses and steps, such as the Prospect of Whitby and Wapping Stairs.

Rupert Murdoch moved his News International printing and publishing works into Wapping in 1986, resulting in a trade union dispute that became known as the "Battle of Wapping".

The area was first settled by Saxons, from whom it takes its name (meaning literally "[the place of] Wæppa's people").[1] It developed along the embankment of the Thames, hemmed in by the river to the south and the now-drained Wapping Marsh to the north. This gave it a peculiarly narrow and constricted shape, consisting of little more than the axis of Wapping High Street and some north-south side streets. John Stow, the 16th century historian, described it as a "continual street, or a filthy strait passage, with alleys of small tenements or cottages, built, inhabited by sailors' victuallers".[2] A chapel to St. John the Baptist was built in 1617, and it was here that Thomas Rainsborough was buried. Wapping was constituted as a parish in 1694[3]

Wapping's proximity to the river gave it a strong maritime character for centuries, well into the 20th century. It was inhabited by sailors, mastmakers, boat-builders, blockmakers, instrument-makers, victuallers and representatives of all the other trades that supported the seafarer. Wapping was also the site of 'Execution Dock', where pirates and other water-borne criminals faced execution by hanging from a gibbet constructed close to the low water mark. Their bodies would be left dangling until they had been submerged three times by the tide.[2]

The Bell Inn, by execution dock was run by Samuel Batts. His daughter, Elizabeth, married James Cook in 1762 at Barking, after the Royal Navy captain had stayed at the Inn.[4] The couple initially settled in Shadwell, attending St Paul's church, but later moved to Mile End. Although they had six children together, much of their married life was spent apart, with Cook absent on his voyages and, after his murder in 1779 at Kealakekua Bay, she survived until 1835.

File:Wapping 1889.jpg
Part of Charles Booth's poverty map showing Wapping in 1889, published in Life and Labour of the People in London. The red areas are "well-to-do"; the blue areas are "Intermittent or casual earnings", and black areas are the "lowest class...occasional labourers, street sellers, loafers, criminals and semi-criminals".

Said to be England's first, the Marine Police Force was formed in 1798 by magistrate Patrick Colquhoun and a Master Mariner, John Harriott, to tackle theft and looting from ships anchored in the Pool of London and the lower reaches of the river. Its base was (and remains) in Wapping High Street and it is now known as the Marine Support Unit.[5] The Thames Police Museum, dedicated to the history of the Marine Police Force, is currently housed within the headquarters of the Marine Support Unit, and is open to the public by appointment.[6]

In 1811, the horrific Ratcliff Highway murders took place nearby at The Highway and Wapping Lane.[7]

The area's strong maritime associations changed radically in the 19th century when the London Docks were built to the north and west of the High Street. Wapping's population plummeted by nearly 60% during that century, with many houses destroyed by the construction of the docks and giant warehouses along the riverfront. Squeezed between the high walls of the docks and warehouses, the district became isolated from the rest of London, although some relief was provided by Brunel's Thames Tunnel to Rotherhithe. The opening of Wapping tube station on the East London Line in 1869 provided a direct rail link to the rest of London. 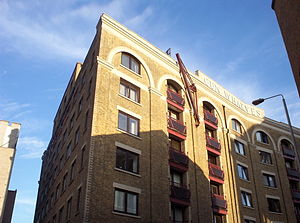 Wapping was devastated by German bombing in World War II[8] and by the post-war closure of the docks. It remained a run-down and derelict area into the 1980s, when the area was transferred to the management of the London Docklands Development Corporation, a government quango with the task of redeveloping the Docklands. The London Docks were largely filled in and redeveloped with a variety of commercial, light industrial and residential properties.

St John's Church (1756) was located on what is now Scandrett Street. Only the tower and shell survived wartime bombing, and have now been converted to housing.[9]

In 1986, Rupert Murdoch's News International built a new £80m printing and publishing works in the north of Wapping. This became the scene of violent protests after News International's UK operation moved from Fleet Street to Wapping, with over 5,000 print workers being sacked when new technology was introduced.

The "Wapping dispute" or "Battle of Wapping" was, along with the miners' strike of 1984-85, a significant turning point in the history of the trade union movement and of UK industrial relations. It started on 24 January 1986 when some 6,000 newspaper workers went on strike after protracted negotiation with their employer, News International (parent of Times Newspapers and News Group Newspapers, and chaired by Rupert Murdoch). News International had built and clandestinely equipped a new printing plant for all its titles in Wapping, and when the print unions announced a strike it activated this new plant with the assistance of the Electrical, Electronic, Telecommunications and Plumbing Union (EETPU).

The plant was nicknamed "Fortress Wapping" when the sacked print workers effectively besieged it, mounting round-the-clock pickets and blockades in an ultimately unsuccessful attempt to thwart the move. In 2005, News International announced the intention to move the print works to regional presses based in Broxbourne (the world's largest printing plant, opened March 2008),[10] Liverpool and Glasgow. The editorial staff were to remain, however, and there was talk of redeveloping the sizeable plot that makes up the printing works.[11] 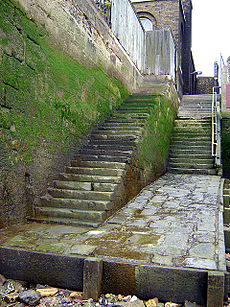 Perhaps Wapping's greatest attraction is the Thames foreshore itself, and the venerable public houses that face onto it. A number of the old 'stairs', such as Wapping Old Stairs and Pelican Stairs (by the Prospect of Whitby) give public access to a littoral zone (for the Thames is tidal at this point) littered with flotsam, jetsam and fragments of old dock installations. Understandably it is popular with amateur archaeologists and treasure hunters - it is surprisingly easy for even a casual visitor to pick up a centuries-old shard of pottery here.

St George in the East

St George in the East on Cannon Street Road is one of six Hawksmoor churches in London, built from 1714 to 1729, with funding from the Commission for Building Fifty New Churches.

When the church was hit by a bomb during the Blitz the original interior was destroyed by the fire, but the walls and distinctive "pepper-pot" towers stayed up. In 1964 a modern church interior was constructed inside the existing walls for the active congregation, and a new flat built under each corner tower.

Behind the church lies St George's Gardens, the original cemetery, which was passed to Stepney Council to maintain as a public park in mid-Victorian times.

At the outbreak of the World War II the crypt of the church was used as a public air raid shelter and was fully occupied when the aforementioned bomb struck. There were no casualties and everyone was evacuated safely (thanks to the air raid wardens and fire brigade). 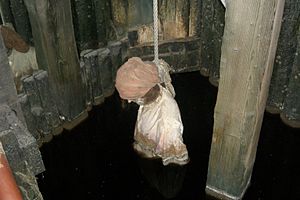 The "Execution Dock" was located on the Thames. It was used by the Admiralty for over 400 years (as late as 1830) to hang pirates that had been convicted and sentenced to death by the Admiralty court.

The Admiralty only had jurisdiction over crimes on the sea, so the dock was located within their jurisdiction by being located far enough offshore as to be beyond the low-tide mark. It was used to kill the notorious Captain Kidd.[12] Many prisoners would be executed together as a public event in front of a crowd of onlookers after being paraded from the Marshalsea Prison across London Bridge and past the Tower of London to the dock. 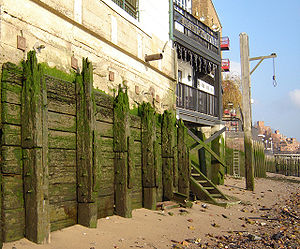 Though Execution Dock is long gone, this gibbet is still maintained on the Thames foreshore by the Prospect of Whitby public house

Three venerable public houses are located near Stairs. By Pelican Stairs is the Prospect of Whitby, which has a much-disputed claim to be the oldest Thames-side public house still in existence.[13] Be that as it may, there has been an inn on the site since the reign of Henry VIII, and it is certainly one of the most famous public houses in London. It is named after a then-famous collier that used to dock regularly at Wapping. A replica of the old Execution Dock gibbet is maintained on the adjacent foreshore, although the actual site of Execution Dock was nearer to the Town of Ramsgate. This also is on the site of a 16th-century inn and is located next to Wapping Old Stairs to the west of the Prospect; by Wapping Pier Head — the former local headquarters of the Customs and Excise.

Situated half way between the two is the Captain Kidd, named after the Scottish privateer William Kidd. He was hanged on the Wapping foreshore in 1701 after being found guilty of murder and piracy.[14] Although the pub occupies a 17th-century building, it was established only in the 1980s.

Wapping has been used as the setting for a number of works of fiction, including The Long Good Friday; the Doctor Who episode "The Talons of Weng-Chiang";[15] the Ruby In The Smoke novel in the Sally Lockhart series by Phillip Pullman;[16] the BBC sitcom Till Death Us Do Part, in which the central character, Alf Garnett, shares his name with Garnet Street in Wapping;[17] and the brothel in The Threepenny Opera, in which Mack the Knife is betrayed by Jenny Diver. The Darlings of Wapping Wharf Launderette is a compilation album by East End group the Small Faces.[18]

Fictional residents also include Bernard Cornwell's Richard Sharpe, an officer in the British Army during the Napoleonic Wars; and Dr. Lemuel Gulliver, the title character of Jonathan Swift's Gulliver's Travels who, in the novel, lived in Wapping before going to sea.

In the best-selling PlayStation 2 game Stuntman the first 'film' the player takes part in is titled 'Toothless in Wapping.'
In the Young Sherlock Holmes film (1985) the investigation of Sherlock and Elizabeth leads them to a warehouse of Froggit and Froggit, a Wapping-area manufacturer, where they discover a modern-day revival of the Rame Tep cult conducting their service inside a wooden-pyramid-reconstruction hidden in the warehouse.[19]

Among the people born in Wapping are W.W. Jacobs, author of The Monkey's Paw. The American painter James McNeill Whistler, well known for his Thames views, painted Wapping (1860-1864) after returning to London from Paris in May, 1859. Whistler took lodgings in Wapping where he explored the Thames to the east of the City of London.[20] The painting is permanently displayed at the National Gallery of Art Washington

John Newton, Anglican clergyman and author of many hymns including Amazing Grace was born here.[21]

Arthur Orton, the Tichborne Claimant, was born in Wapping.

During the 1990s, Wapping was home to American entertainer Cher.[22] TV presenter Graham Norton, currently (as of 2010) lives in the locality.[23]

For details of education in Wapping, see List of schools in the London Borough of Tower Hamlets.

The nearest station is Wapping for London Overground.

Wapping is connected to the National Road Network by The Highway A1203 east-west to the north of the area.

The Thames Path passes west-east through Wapping for cyclists and walkers. The Ornamental Canal runs though the area mostly in the centre to Shadwell Basin.