War of the Second Coalition 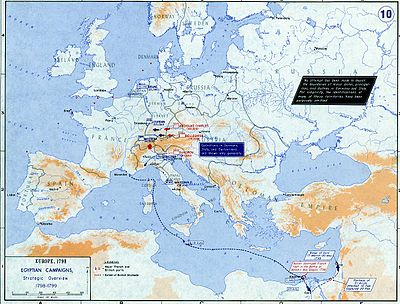 The War of the Second Coalition (1798–1802) was the second war on revolutionary France by the European monarchies, led by Britain, Austria and Russia, and including the Ottoman Empire, Portugal and Naples. Their goal was to contain republican France. They failed to overthrow the revolutionary regime and French territorial gains since 1793 were confirmed. The Allies formed a new alliance and attempted to roll back France's previous military conquests. The Coalition did very well in 1799, but Russia pulled out. Napoleon took charge in France in late 1799, and he and his generals defeated the Coalition. In the Treaty of Lunéville in 1801, France held all of its previous gains and obtained new lands in Tuscany, Italy, while Austria was granted Venetia and the Dalmatian coast. Britain and France signed the Treaty of Amiens in March 1802, bringing an interval of peace in Europe that lasted for 14 months. By May 1803 Britain and France were again at war and in 1805 Britain assembled the Third Coalition to resume the war against France.

On 20 April 1792, the French Legislative Assembly declared war on Austria. In this War of the First Coalition (1792–97), France ranged itself against most of the European states sharing land or water borders with her, plus Portugal and the Ottoman Empire. Although the Coalition forces achieved several victories at the outset of the war, they were ultimately repulsed from French territory and then lost significant territories to the French, who began to set up client republics in their occupied territories. The efforts of Napoleon Bonaparte in northern Italy pushed Austrian forces back and resulted in the negotiation of the Peace of Leoben (17 April 1797) and the subsequent Treaty of Campo Formio (October 1797).[5]

In the summer of 1798, Napoleon Bonaparte led an expedition to Egypt, where his army was trapped and (after he returned to France), surrendered. Meanwhile, during his absence from Europe, the outbreak of violence in Switzerland drew French support against the old Swiss Confederation. When revolutionaries overthrew the cantonal government in Bern, the French Army of the Alps invaded, ostensibly to support the Swiss Republicans. In northern Italy, Russian general Aleksandr Suvorov won a string of victories, driving the French under Moreau out of the Po Valley, forcing them back on the French Alps and the coast around Genoa. However, the Russian armies in the Helvetic Republic (Switzerland) were defeated by French commander André Masséna, and Suvorov eventually withdrew. Ultimately the Russians left the Coalition when Great Britain insisted on the right to search all vessels it stopped at sea. In Germany, Archduke Charles of Austria drove the French under Jean-Baptiste Jourdan back across the Rhine and won several victories in Switzerland. Jourdan was replaced by Massena, who then combined the Armies of the Danube and Helvetia.

From October 1797 until March 1799, the signatories of the Treaty of Campo Formio avoided armed conflict. Despite their agreement at Campo Formio, two primary combatants, France and Austria, remained suspicious of each other and several diplomatic incidents undermined the agreement. The French demanded additional territory not mentioned in the Treaty. The Habsburgs were reluctant to hand over designated territories, much less additional ones. The Congress at Rastatt proved inept at orchestrating the transfer of territories to compensate the German princes for their losses. Ferdinand of Naples refused to pay tribute to France, followed by the Neapolitan rebellion and the subsequent establishment of the Parthenopaean Republic. Republicans in the Swiss cantons, supported by the French army, overthrew the central government in Bern and established the Helvetic Republic.[6]

For more details on this topic, see Mediterranean campaign of 1798.

Other factors contributed to the rising tensions. On his way to Egypt, Napoleon had stopped at the heavily fortified port city of Valletta. Grand Master Ferdinand von Hompesch zu Bolheim, who ruled the island, would only allow two ships at a time into the harbor, in accordance with the island's neutrality. Bonaparte immediately ordered the bombardment of Valletta and on 11 June, General Louis Baraguey d'Hilliers directed a landing of several thousand French troops at strategic locations around the island. The French Knights of the order deserted, and the remaining Knights failed to mount a successful resistance. Bonaparte forcibly removed the other Knights from their possessions, angering Paul, Tsar of Russia, who was the honorary head of the Order. The French Directory, furthermore, was convinced that the Austrians were conniving to start another war. Indeed, the weaker the French Republic seemed, the more seriously the Austrians, the Neapolitans, the Russians and the British actually discussed this possibility.[7]

Military planners in Paris understood that the northern Rhine Valley, the south-western German territories, and Switzerland were strategically important for the defense of the Republic. The Swiss passes commanded access to northern Italy; consequently, the army that held those passes could move troops to and from northern and southern theaters quickly.[8]

Toward this end, in early November 1798, Jourdan arrived in Hüningen to take command of the French forces there, the so-called Army of Observation because its function was to observe the security of the French border on the Rhine. Once there, he assessed the quality and disposition of the forces and identified needed supplies and manpower. He found the army woefully inadequate for its assignment. The Army of the Danube, and its two flanking armies, the Army of Helvetia and the Army of Mayence, or Mainz, were equally short of manpower, supplies, ammunition, and training; most resources were already directed to the Army in Northern Italy, and Army of Britain, and the Egyptian expedition. Jourdan documented assiduously these shortages, pointing out in lengthy correspondence to the Directory the consequences of an under-manned and under-supplied army; his petitions seemed to have little effect on the Directory, which sent neither significant additional manpower nor supplies.[9]

Jourdan's orders were to take the army into Germany and secure strategic positions, particularly on the south-west roads through Stockach and Schaffhausen, at the western-most border of Lake Constance. Similarly, as commander of the Army of Helvetia (Switzerland), Andre Massena would acquire strategic positions in Switzerland, in particular the St. Gotthard Pass, the passes above Feldkirch, particularly Maienfeld (St. Luciensteig), and hold the central plateau in and around Zürich and Winterthur. These positions would prevent the Allies of the Second Coalition from moving troops back and forth between the northern Italian and German theaters, but would allow French access to these strategic passes. Ultimately, this positioning would allow the French to control all western roads leading to and from Vienna. Finally, the army of Mayence would sweep through the north, blocking further access to and from Vienna from any of the northern Provinces, or from Britain.[10]

Britain and Austria organized a new coalition against France in 1798, including for the first time the Russian Empire, although no action occurred until 1799 except against the kingdom of the Two Sicilies.

In Europe, the allies mounted several invasions, including campaigns in Italy and Switzerland and an Anglo-Russian invasion of the Netherlands. Russian general Aleksandr Suvorov inflicted a series of defeats on the French in Italy, driving them back to the Alps. However, the allies were less successful in the Netherlands, where the British retreated after a defeat at Castricum, and in Switzerland, where after initial victories a Russian army was completely routed at the Second Battle of Zurich. These reverses, as well as British insistence on searching shipping in the Baltic Sea led to Russia withdrawing from the Coalition.[11]

Napoleon himself invaded Syria from Egypt, but after a failed siege of Acre retreated to Egypt, repelling a British-Turkish invasion. Alerted to the political and military crisis in France, he returned, leaving his army behind, and used his popularity and army support to mount a coup that made him First Consul, the head of the French government.[12] 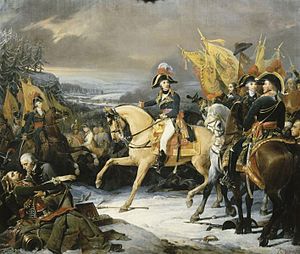 General Moreau at the Battle of Hohenlinden

Napoleon sent Moreau to campaign in Germany, and went himself to raise a new army at Dijon and march through Switzerland to attack the Austrian armies in Italy from behind. Narrowly avoiding defeat, he defeated the Austrians at the Battle of Marengo and reoccupied northern Italy.[13]

Moreau meanwhile invaded Bavaria and won a great battle against Austria at Hohenlinden. Moreau continued toward Vienna and the Austrians sued for peace.[14]

The Austrians negotiated the Treaty of Lunéville, basically accepting the terms of the previous Treaty of Campo Formio. In Egypt, the Ottomans and British invaded and finally compelled the French to surrender after the fall of Cairo and Alexandria.[15]

Britain continued the war at sea. A coalition of non-combatants including Prussia, Russia, Denmark, and Sweden joined to protect neutral shipping from Britain's blockade, resulting in Nelson's surprise attack on the Danish fleet in harbor at the Battle of Copenhagen.[16]

In December 1801, an expedition was sent to Saint-Domingue to quell the revolution that had started there in 1791 once and for all, but the blockade of the Caribbean island by the British fleet made the sending of reinforcements impossible.

In 1802, the British and French signed the Treaty of Amiens, ending the war. Thus began the longest period of peace during the period 1792–1815. The treaty is generally considered to be the most appropriate point to mark the transition between the French Revolutionary Wars and the Napoleonic Wars, although Napoleon was not crowned emperor until 1804.