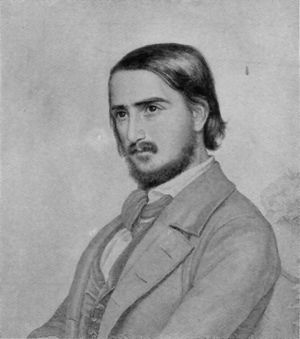 A war poet is usually defined as a poet who participates in a war and writes about his experiences. While the term is applied especially to those who served during World War I,[1] it is documented as early as 1848, in reference to German revolutionary poet, Georg Herwegh.[2][3] and is now applied to a poet writing about any war. However, Tennyson wrote probably one of the most famous war poems of the nineteenth century, and another non-combatant, Thomas Hardy, wrote major war poetry. 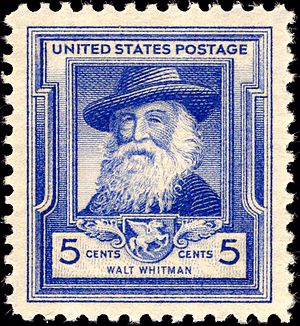 As the American Civil War was beginning, American poet Walt Whitman published his poem "Beat! Beat! Drums!" as a patriotic rally call for the North.[4] Whitman volunteered for a time as a nurse in the army hospitals,[5] and his collection Drum-Taps (1865) deals with his experiences during the War.

Probably the most famous nineteenth century war poem is Tennyson's "The Charge of the Light Brigade", which he supposedly wrote in only a few minutes after reading an account of the battle in The Times. As poet laureate he often wrote verses about public events. It immediately became hugely popular, even reaching the troops in the Crimea, where it was distributed in pamphlet form .[6]

Rudyard Kipling's poem "The Last of the Light Brigade", written some forty years after the appearance of "The Charge of the Light Brigade", in 1891, focuses on the terrible hardships faced in old age by veterans of the Crimean War, as exemplified by the cavalry men of the Light Brigade, in an attempt to shame the British public into offering financial assistance.[7] Various lines from the poem are randomly quoted by Mr. Ramsay in Virginia Woolf's To The Lighthouse.

Rudyard Kipling wrote poetry in support of the British cause in the Boer War,[8] including the well known "Lichtenberg", which is about a combatant's death in a foreign land.[9] Swinburne, Thomas Hardy, and others wrote also poems relating to the Boer War.

"But ranged as infantry,
And staring face to face,
I shot at him as he at me,
And killed him in his place.

"I shot him dead because —
Because he was my foe,
Just so: my foe of course he was;
That's clear enough; although

"He thought he'd 'list, perhaps,
Off-hand like — just as I —
Was out of work — had sold his traps —
No other reason why.

"Yes; quaint and curious war is!
You shoot a fellow down
You'd treat if met where any bar is,
Or help to half-a-crown."

The major novelist and poet Thomas Hardy (1840 – 1928) wrote a number of significant war poems that relate to both the Boer Wars and World War I, including "Drummer Hodge", "In Time of 'The Breaking of Nations'", and "The Man He Killed"; "[h]is work had a profound influence on other war poets such as Rupert Brooke and Siegfried Sassoon".[11] Hardy in these poems often used the viewpoint of ordinary soldiers and their colloquial speech.[11] A theme in the Wessex Poems (1898) is the long shadow that the Napoleonic Wars cast over the nineteenth century, as seen, for example, in "The Sergeant's Song" and "Leipzig". The Napoleonic War is the subject of Hardy's drama in verse The Dynasts (1904–08).[12]

At the beginning of World War I, like many other writers, Kipling wrote pamphlets and poems which enthusiastically supported the UK's war aims of restoring Belgium after that kingdom had been occupied by Germany together with more generalised statements that Britain was standing up for the cause of good.[13]

For the first time, a substantial number of important British poets were soldiers, writing about their experiences of war. A number of them died on the battlefield, most famously Edward Thomas, Isaac Rosenberg, Wilfred Owen, and Charles Sorley. Others including Robert Graves,[14] Ivor Gurney and Siegfried Sassoon survived but were scarred by their experiences, and this was reflected in their poetry. Robert H. Ross describes the British "war poets" as Georgian poets.[15] Many poems by British war poets were published in newspapers and then collected in anthologies. Several of these early anthologies were published during the war and were very popular, though the tone of the poetry changed as the war progressed. One of the wartime anthologies, The Muse in Arms, was published in 1917, and several were published in the years following the war.

David Jones' epic poem of World War I In Parenthesis was first published in England in 1937, and is based on Jones's own experience as an infantryman in the War. In Parenthesis narrates the experiences of English Private John Ball in a mixed English-Welsh regiment starting with their leaving England and ending seven months later with the assault on Mametz Wood during the Battle of the Somme. The work employs a mixture of lyrical verse and prose, is highly allusive, and ranges in tone from formal to Cockney colloquial and military slang. The poem won the Hawthornden Prize and the admiration of writers such as W. B. Yeats and T. S. Eliot.[16]

Canadian war poets of this period included John McCrae, who wrote In Flanders Fields, and Robert W. Service who worked as an ambulance driver for the Canadian Red Cross and was a war correspondent for the Canadian government.

Russia also produced a number of significant war poets including Nikolay Gumilyov (whose war poems were assembled in the collection The Quiver (1916)), Alexander Blok, Ilya Ehrenburg (who published war poems in his book "On the Eve"), and Nikolay Semenovich Tikhonov (who published the book Orda (The horde) in 1922).[18] 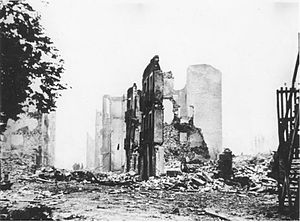 Ruins of Guernica, Spain, bombed by the German airforce in 1937

The Spanish Civil War produced a substantial volume[19] of poetry in English (as well as in Spanish). There were English-speaking poets serving in the Spanish Civil War on both sides. Among those fighting with the Republicans as volunteers in the International Brigades were Clive Branson, John Cornford, Charles Donnelly, Alex McDade and Tom Wintringham.[20] On the Nationalist side, the most famous English language poet of the Spanish Civil War remains South African Roy Campbell.

By World War II the role of "war poet" was so well-established in the public mind, and it was anticipated that the outbreak of war in 1939 would produce a literary response equal to that of the First World War. The Times Literary Supplement went so far as to pose the question in 1940: "Where are the war-poets?"[21] Alun Lewis and Keith Douglas are the standard critical choices amongst British war poets of this time.[22] In 1942, Henry Reed published a collection of three poems about British infantry training entitled Lessons of the War; three more were added after the war.[23] Sidney Keyes was another important and prolific Second World War poet.[21]

Karl Shapiro, a stylish writer with a commendable regard for his craft,[24] wrote poetry in the Pacific Theater while he served there during World War II. His collection V-Letter and Other Poems, written while Shapiro was stationed in New Guinea, was awarded the Pulitzer Prize for Poetry in 1945, while Shapiro was still in the military. Shapiro was American Poet Laureate in 1946 and 1947. (At the time this title was Consultant in Poetry to the Library of Congress which was changed by Congress in 1985 to Poet Laureate Consultant in Poetry to the Library of Congress.). Also, while serving in the U.S. Army, the American poet Randall Jarrell published his second book of poems, Little Friend, Little Friend (1945) based on his wartime experiences. The book includes one of Jarrell's best known war poems, "The Death of the Ball Turret Gunner." In his follow-up book, Losses (1948), he also focused on the war. The poet Robert Lowell stated publicly that he thought Jarrell had written "the best poetry in English about the Second World War."[25]

Most recently, the Iraq War has produced war poets including Brian Turner whose début collection, Here, Bullet, is based on his experience as an infantry team leader with the 3rd Stryker Brigade Combat Team from November 2003 until November 2004 in Iraq. The book won numerous awards including the 2005 Beatrice Hawley Award, the 2006 Maine Literary Award in Poetry, and the 2006 Northern California Book Award in Poetry.[28][29] The book also was an Editor's Choice in The New York Times and received significant attention from the press including reviews and notices on NPR and in The New Yorker, The Global and Mail, and the Library Journal. In The New Yorker, Dana Goodyear wrote that, "As a war poet, [Brian Turner] sidesteps the classic distinction between romance and irony, opting instead for the surreal."[30]