From Infogalactic: the planetary knowledge core
Jump to: navigation, search
This article is about the large buildings that store goods. For other uses, see Warehouse (disambiguation). 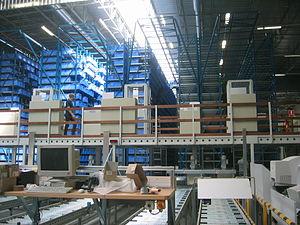 A warehouse is a commercial building for storage of goods. Warehouses are used by manufacturers, importers, exporters, wholesalers, transport businesses, customs, etc. They are usually large plain buildings in industrial areas of cities, towns and villages.

They usually have loading docks to load and unload goods from trucks. Sometimes warehouses are designed for the loading and unloading of goods directly from railways, airports, or seaports. They often have cranes and forklifts for moving goods, which are usually placed on ISO standard pallets loaded into pallet racks. Stored goods can include any raw materials, packing materials, spare parts, components, or finished goods associated with agriculture, manufacturing and production. In Indian English a warehouse may be referred to as a godown.[1]

Warehouses have been found at Ostia. They were an essential tool for trading nations. Medieval examples art part of Europes cultural heritage. During the industrial revolution their function evolved and became more specialised, and architecturally significant. Always a building of function, they have adapted to mechanisation and changes in the supply chain. 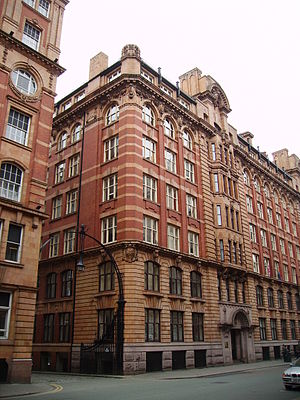 Historically warehouses were a dominant part of the urban landscape from the start of the Industrial Revolution through the 19th century and into the twentieth century. The buildings remained when their original usage had changed. There are four identifiable types of warehouses.[clarification needed][2] The cotton industry rose with the development of the warehouse, and all five types were represented in Manchester in the United Kingdom. Warehouses of that period in Manchester were often lavishly decorated, but modern warehouses are more functional.[3]

Warehouse allow transport optimization along the supply chain, and allow companies to work with an optimal inventory (economic order quantity) regarding service quality. For example, at the terminal point of a transport system it is necessary to stockpile produce until a full load can be transported. Warehouses can also be used to store the unloaded goods from the vessel.

In industries whose goods require a period of maturation between production and retail, such as viniculture and cheesemaking, warehouses can be used to store the goods in large quantities.

Display of goods for sale

These displayed goods for the home trade. This would be finished goods- such as the latest cotton blouses or fashion items. Their street frontage was impressive, so they took the styles of Italianate Palazzos.

Richard Cobden's construction in Mosley Street was the first palazzo warehouse. There were already seven warehouses on Portland Street when they commenced building the elaborate Watts Warehouse of 1855,[2][4] but four more were opened before it was finished. It was this type of warehouse that inspired the Germans in Düsseldorf and Munich to name their prestigious department stores Warenhäuser.[dubious – discuss]

These catered for the overseas trade. They became the meeting places for overseas wholesale buyers where printed and plain could be discussed and ordered.[2] Trade in cloth in Manchester was conducted by many nationalities.

Behrens Warehouse is on the corner of Oxford Street and Portland Street. It was built for Louis Behrens & Son by P Nunn in 1860. It is a four storey predominantly red brick build with 23 bays along Portland Street and 9 along Oxford Street.[4] The Behrens family were prominent in banking and in the social life of the German Community in Manchester.[5] [6]

The main purpose of packing warehouses was the picking, checking, labelling and packing of goods for export.[2] The packing warehouses: Asia House, India House and Velvet House along Whitworth Street were some of the tallest buildings of their time.

Warehouses were built close to the major stations in railway hubs. The first railway warehouse to be built was opposite the passenger platform at the terminus of the Liverpool and Manchester Railway. There was an important group of warehouses around London Road station (now Piccadilly station).In the 1890s the Great Northern Railway Company’s warehouse was completed on Deansgate: this was the last major railway warehouse to be built.[2]

The London Warehouse Picadilly was one of four warehouses built by the Manchester, Sheffield and Lincolnshire Railway in about 1865 to service the new London Road Station. It had its own branch to the Ashton Canal. This warehouse was built of brick with stone detailing. It had cast iron columns with wrought iron beams.[7]

All these warehouse types can trace their origins back to the canal warehouses which were used for trans-shipment and storage. Castlefield warehouses are of this type- and important as they were built at the terminus of the Bridgewater Canal in 1761.

Some of the most common warehouse storage systems are:

A "piece pick" is a type of order selection process where product is picked and handled in individual units and placed in an outer carton, tote or other container before shipping. Catalog companies and internet retailers are examples of predominantly piece-pick operations. Their customers rarely order in pallet or case quantities; instead, they typically order just one or two pieces of one or two items. Several elements make up the piece-pick system. They include the order, the picker, the pick module, the pick area, handling equipment, the container, the pick method used and the information technology used.[8] Every movement inside a warehouse must be accompanied by a work order. Warehouse operation can fail when workers move goods without work orders, or when a storage position is left unregistered in the system.

Material direction and tracking in a warehouse can be coordinated by a Warehouse Management System (WMS), a database driven computer program. Logistics personnel use the WMS to improve warehouse efficiency by directing pathways and to maintain accurate inventory by recording warehouse transactions.

Some warehouses are completely automated, and require only operators to work and handle all the task. Pallets and product move on a system of automated conveyors, cranes and automated storage and retrieval systems coordinated by programmable logic controllers and computers running logistics automation software. These systems are often installed in refrigerated warehouses where temperatures are kept very cold to keep product from spoiling, especially in electronics warehouse where they require specific temperature to avoid damaging the parts, and also where land is expensive, as automated storage systems can use vertical space efficiently. These high-bay storage areas are often more than 10 meters (33 feet) high, with some over 20 meters (65 feet) high. Automated storage systems can be built up to 40m high.

For a warehouse to function efficiently, the facility must be properly slotted. Slotting addresses which storage medium a product is picked from (pallet rack or carton flow), and how they are picked (pick-to-light, pick-to-voice, or pick-to-paper). With a proper slotting plan, a warehouse can improve its inventory rotation requirements—such as first in, first out (FIFO) and last in, first out (LIFO)—control labor costs and increase productivity.[9]

Pallet racks are commonly used to organize a warehouse. It is important to know the dimensions of racking and the number of bays needed as well as the dimensions of the product to be stored.[10] Clearance should be accounted for if using a forklift or pallet mover to move inventory.

Modern warehouses commonly use a system of wide aisle pallet racking[11] to store goods which can be loaded and unloaded using forklift trucks.

Traditional warehousing has declined since the last decades of the 20th century, with the gradual introduction of Just In Time techniques. The JIT system promotes product delivery directly from suppliers to consumer without the use of warehouses. However, with the gradual implementation of offshore outsourcing and offshoring in about the same time period, the distance between the manufacturer and the retailer (or the parts manufacturer and the industrial plant) grew considerably in many domains, necessitating at least one warehouse per country or per region in any typical supply chain for a given range of products.

Recent retailing trends have led to the development of warehouse-style retail stores. These high-ceiling buildings display retail goods on tall, heavy duty industrial racks rather than conventional retail shelving. Typically, items ready for sale are on the bottom of the racks, and crated or palletized inventory is in the upper rack. Essentially, the same building serves as both warehouse and retail store.

Another trend relates to Vendor-managed inventory (VMI). This gives the vendor the control to maintain the level of stock in the store. This method has its own issue that the vendor gains access to the warehouse.

Large exporters and manufacturers use warehouses as distribution points for developing retail outlets in a particular region or country. This concept reduces end cost to the consumer and enhances the production sale ratio.

Cross docking is a specialised type of distribution center (DC) in that little or no inventory is stored and product is received, processed (if needed) and shipped within a short timeframe. As in warehousing, there are different types of cross docks.

Reverse logistics is another type of warehousing that has become popular for environmental reasons. The term refers to items that are going from the end user back to the distributor or manufacturer.[citation needed]

Another modern trend is for warehouses is raving.

Cold storage helps stabilize market prices and evenly distribute goods both on demand basis and time basis. The farmers get the opportunity of producing cash crops to get remunerative prices. The consumers get the supply of perishable commodities with lower fluctuation of prices.

Ammonia and Freon compressors are commonly used in cold storage warehouses to maintain the temperature. Ammonia refrigerant is cheaper, easily available and has a high latent heat of evaporation but it is also highly toxic and can form an explosive mixture when mixed with oil containing high percentage of carbon. Insulation is also important, to reduce loss of cold and to keep different sections of the warehouse at different temperatures.

There are two main types of refrigeration system used in cold storage warehouses, a Vapour absorption system (VAS) and Vapour compression system (VCS). VAS, although comparatively costlier, is quite economical in operation and adequately compensates the higher initial investment.

The temperature necessary for preservation depends on the storage time required and the type of product. In general, there are three groups of products, foods that are alive (e.g. fruits and vegetables), foods that are no longer alive and have been processed in some form (e.g. meat and fish products), and commodities that benefit from storage at controlled temperature (e.g. beer, tobacco).

Location is a very critical aspect for the success of cold storage. It should be in close proximity of a growing area as well as a market, be easily accessible for heavy vehicles, and have uninterrupted power supply.

Cold storage and the law

There are state and local laws that regulate the cold storage industry, requiring safe working conditions for employees, and operational procedures must be in accordance with these laws. Companies that are aware of and comply with applicable regulations are more likely to pass inspection, avoid notices of violation, and will be able to continue operating at full capacity, ensuring greater customer service and uninterrupted product flow.

The capacity of Refrigerated Warehouses in the United States: October 1, 2011 was reported as being:

There are few non-profit organizations which are focused on imparting knowledge, education and research in the field of warehouse management and its role in the supply chain industry. The Warehousing Education and Research Council (WERC)[14] and International Warehouse Logistics Association (IWLA)[15] in Illinois, United States. They provide professional certification and continuing education programs for the industry in the country. The Australian College of Training have government funded programs to provide personal development and continuation training in warehousing certs II - V (Diploma), they operate in Western Australia online and face to face, or Australia wide for online only courses.