From Infogalactic: the planetary knowledge core
Jump to: navigation, search
For other uses, see WBTV.
Not to be confused with the former television station, The WB, which was shut down along with the United Paramount Network and were merged to form The CW Television Network on September 18, 2006. 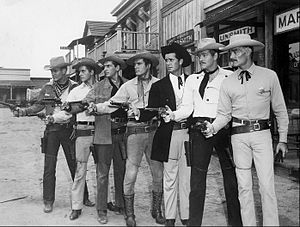 The division was started on March 21, 1955[1] with its first and most successful head being Jack L. Warner's son-in-law William T. Orr. ABC had major success against its competition with Walt Disney's Disneyland TV series and approached Warner Bros. initially with the idea of purchasing the studio's film library (WB eventually sold the rights to the negatives of pre-1950 films and pre-1948 cartoons and shorts to Associated Artists Productions, or a.a.p., in 1956[5][6]). WB formally entered television production with the premiere of its self-titled anthology series Warner Bros. Presents on ABC. The one hour weekly show featured rotating episodes of television series based on the WB films, Casablanca and King's Row, as well as an original series titled Cheyenne with Clint Walker. The first one-hour television western, Cheyenne became a big hit for the network and the studio with the added advantage of featuring promotions for upcoming Warner Bros. cinema releases in the show's last ten minutes. One such segment for Rebel Without a Cause featured Gig Young notably talking about road safety with James Dean.

With only Cheyenne being a success, Warner Bros. ended the ten-minute promotions of new films and replaced Warner Bros. Presents with an anthology series titled Conflict. It was felt that "Conflict" was what the previous series lacked. Conflict showed the pilots for Maverick and 77 Sunset Strip[citation needed].

The success of Cheyenne led WBTV to produce many series for ABC such as Westerns (Maverick, Lawman, Colt .45, Bronco that was a spin off of Cheyenne, Sugarfoot, and The Alaskans), crime dramas (77 Sunset Strip, Hawaiian Eye, Bourbon Street Beat, and Surfside 6), and other shows such as The Gallant Men and The Roaring Twenties using stock footage from WB war films and gangster films respectively. The company also produced Jack Webb's Red Nightmare for the U.S. Department of Defense that was later shown on American television on Jack Webb's General Electric True.

All shows were made in the manner of WB's B pictures in the 1930s and 1940s;[7] fast paced, lots of stock footage from other films, stock music from the Warners music library and contracted stars working long hours for comparatively small salaries with restrictions on their career.

During a Hollywood television writers strike, Warner Bros. reused many plots from its films and other television shows under the nom de plume of "W. Hermanos".[8] This was another example of imitating Warner Bros' B Pictures who would remake an "A" film and switch the setting.[9] 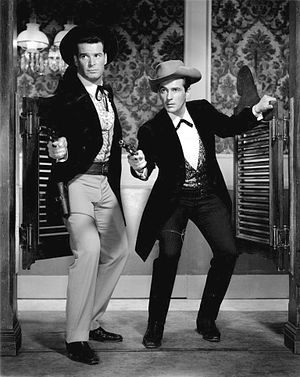 Two of the most popular stars, James Garner and Clint Walker, quit over their conditions. Garner never returned to the Warner's fold during this period. Successful Warner's television stars found themselves in leading roles of many of the studio's films with no increase in salary. Efrem Zimbalist, Jr. was simultaneously the lead of 77 Sunset Strip, in a recurring role on Maverick, and also headlined several films until exhaustion forced the studio to give him a rest. Many other actors under contract to Warner's at the time, who despite their work conditions, did see their stars rise over time, albeit for most only briefly, included Jack Kelly, Will Hutchins, Peter Brown, Ty Hardin, Wayde Preston, John Russell, Donald May, Rex Reason, Richard Long, Van Williams, Roger Smith, Mike Road, Anthony Eisley, Robert Conrad, Robert McQueeney, Dorothy Provine, Diane McBain, and Connie Stevens. Edd Byrnes and Troy Donahue would go on to become teen heartthrobs. Another contract player, Englishman Roger Moore (Maverick and The Alaskans), was growing displeased with Warner as his contract was expiring and would relocate to Europe from Hollywood, becoming an international star on TV, and eventually, in films. Warners also contracted established stars such as Ray Danton, Peter Breck, Jeanne Cooper and Grant Williams. These stars often appeared as guest stars, sometimes reprising their series role in another TV series.

The stars appeared in Warner Bros. cinema releases with no additional salary, with some such as Zimbalist, Walker, Garner (replacing Charlton Heston in Darby's Rangers), and Danton (replacing Robert Evans in The Rise and Fall of Legs Diamond[10]) playing the lead roles; many of the stars appeared in ensemble casts in such films as The Chapman Report and Merill's Marauders. Some stars such as Connie Stevens, Edd Byrnes, Robert Conrad and Roger Smith made albums for Warner Bros. Records.

It was during this period, that shows, particularly Westerns like Cheyenne and Maverick; and the crime dramas like 77 Sunset Strip, Hawaiian Eye and Surfside 6 featured catchy theme songs, that became just as much a part of the American pop culture landscape, as the shows themselves. Depending on the particular show (in this case, the Westerns), William Lava or David Buttolph would compose the music, with lyrics by Stan Jones or Paul Francis Webster, among others. For the crime shows, it was up to the songwriting team of Jerry Livingston and Mack David, who also scored the themes for the sitcom Room for One More, and The Bugs Bunny Show.

In 1960, WBTV turned its attentions to the younger viewer, for one program, anyway, as they brought Bugs Bunny and the other WB cartoon characters to prime-time, with The Bugs Bunny Show, which featured cartoons released after July 31, 1948 (which had not been sold to a.a.p.), combined with newly animated introductory material. Also, that year saw the debut of The Roaring Twenties (which was thought to be a more benign alternative to Desilu's The Untouchables. Whether or not that was the actual case, it was, in fact, much less successful).

WBTV expanded on its existing genre of Westerns and crime dramas, and in January, 1962, produced its first sitcom, Room For One More. Based on the memoirs of Anna Rose, which in 1952 WB made into a movie starring Cary Grant and his then wife Betsy Drake (the only movie that they worked together in) about a married couple with two children of their own, who went on to adopt at least two more, the TV series starred Andrew Duggan and Peggy McKay as George and Anna Rose. Acting legend Mickey Rooney's son Tim, and Ahna Capri, who would continue to do episodic TV roles and feature films (arguably, her best-known movie was Enter the Dragon starring Bruce Lee) were cast as the Rose's natural children. The show only lasted for half a season. In the fall of that year, a WWII drama The Gallant Men debuted, but lasted for only one season.

WBTV exclusively produced shows for the ABC network until 1963, when Temple Houston premiered on NBC.

In 1964, WBTV once again tried to turn a classic film comedy of its own into a sitcom, with No Time for Sergeants. Both the sitcom and the 1958 movie were based on the 1955 Broadway play, which starred Andy Griffith (TV's U.S. Steel Hour also adapted the stage play for TV in 1956). The sitcom starred Sammy Jackson as Will Stockdale, a naive Georgia farm boy drafted into the military. 1965 saw the debut of F-Troop, a Western spoof taking place at a U.S. Army post after the Civil War. Despite lasting two seasons, it is still considered a classic. Forrest Tucker, Larry Storch, and Ken Berry led an ensemble cast featuring military misfits, and an Indian tribe, who, among other things, forgot how to do a rain dance.

The streak of identifiable series subsided in 1963 with a halt of using stock company (acting) contract players and Jack Webb taking over WBTV and not being particularly successful. However, many series were still filmed at Warner Bros. such as F-Troop and The F.B.I.[11]

In 1976, the company acquired The Wolper Organization, most notably for Chico and the Man and Welcome Back, Kotter. In 1989, it acquired Lorimar-Telepictures. Telepictures was later folded into WBTV's distribution unit, and in 1990, came back as a television production company. In 1993, Lorimar Television was folded into WBTV.

In 2006, WBTV made its vast library of programs available for free viewing on the Internet (through sister company AOL's IN2TV service), with Welcome Back, Kotter as its marquee offering. Some of these programs have not been seen publicly since their last syndicated release in the 1980s.

WBTV has had a number of affiliated production houses that have co-produced many of their shows with WBTV. These include but are not limited to: Bruce Helford's Mohawk Productions (The Drew Carey Show, The Norm Show, The Oblongs, George Lopez), John Wells Productions (ER, The West Wing, Third Watch), Chuck Lorre Productions (Two and a Half Men, The Big Bang Theory, Mike & Molly, Mom), Jerry Bruckheimer Television (Without a Trace, Cold Case), Bad Robot Productions (Fringe, Person of Interest, Revolution), Rockne S. O'Bannon Television, Miller-Boyett Productions - which was inherited from Lorimar (Full House, Family Matters) and in 2010, Conan O'Brien's production company Conaco switched its affiliation to WBTV from Universal Media Studios, coinciding with O'Brien's move to his new talk show, Conan at Time Warner-owned TBS.[12]

In August 2009 in Australia, The Nine Network and Warner Bros. Television launched digital free-to-air channel GO! with Warner Bros. Television holding a 33% stake in the new joint venture with Sony Pictures (titles were later picked up by rival Seven in 2011). During that, the network signed 4 more years with the output between 2011 and 2015.