The Warrego Highway is located in southern Queensland, Australia. It connects coastal centres to the south western areas of the state, and is approximately 750 km in length. It takes its name from the Warrego River, which is the endpoint of the highway. The entire highway is part of the National Highway system linking Darwin and Brisbane: formerly National Highway 54, Queensland began to convert to the alphanumeric system much of Australia had adopted in the early-2000s and is now designated as National Highway A2.

The highway commences at the end of the M2 Ipswich Motorway, near Ipswich, and climbs the Great Dividing Range to Toowoomba. The first section of highway between Ipswich and Toowoomba is motorway grade, a four lane divided highway with motorway-style on-ramps and off-ramps. In the Lockyer Valley the highway is experiencing strip development with a growth in petrol stations and commercial properties.[1]

From Toowoomba, it then crosses the Darling Downs and continues to Charleville where the road is two lanes with many passing lanes along the route.

Towns along the route 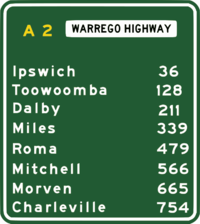 From east to west, the highway passes through or close to the cities and major towns of:

In January 2011, the highway was extensively damaged where it crosses the Toowoomba Range. This included land slips, shoulder and embankment erosion, the erosion of drains and damaged rock fall netting.[3] The road wasn't fully repaired with all four lanes open until September 2011.[4]

The Toowoomba Second Range Crossing is a major road proposal aimed at bypassing the urban area of Toowoomba and providing a better crossing of the Great Dividing Range. The bypass will link the Warrego Highway at Helidon (in the east) with the highway at Charlton (in the west). The bypass will continue to the Gore Highway and will be 41 km in length.

Other items of interest

On 28 September 2011 the Queensland Main Roads Minister, Craig Wallace, announced that an 85 km stretch of the Warrego Highway will be renamed Darren Lockyer Way, in honour of the retired Brisbane Broncos, Queensland and Australian rugby league captain. The section of road to be renamed is from Riverview to the bottom of the Toowoomba Range at Withcott. Special signage including "Welcome to Darren Lockyer Way" has been erected.[5]

The section of the Warrego Highway from Withcott to the top of the Toowoomba Range was first opened in January, 1855 as a toll road, named Toll Bar Road.[6] The toll collection point was marked by a bar across the road and a fence on either side. The upper section of Toll Bar Road was initially unsealed and very steep, with grades up to 14%. This road remained in use until December, 1939, when work on a new, less steep, upper section was completed. Part of the upper section is now a suburban street named Old Toll Bar Road.[7] The term "The Toll Bar" is sometimes used by locals to describe the current road, and it is also used in the mapping software distributed with Navman GPS systems.