Warren is a city in Warren County, Pennsylvania, United States, located along the Allegheny River. The population was 9,710 at the 2010 census. It is the county seat of Warren County.[1] It is home to the headquarters of the Allegheny National Forest and the Cornplanter State Forest. It is also the headquarters for the Chief Cornplanter Council, the oldest continuously chartered Boy Scouts of America Council, and the catalog company Blair. Warren is the principal city of the Warren, PA Micropolitan Statistical Area.

Warren was initially inhabited by Native Americans of the Seneca nation. French explorers had longstanding claims to the area which they acted to secure in an unambiguous fashion with a military-Amerindian expedition in 1749 that buried a succession of plaques claiming the territory as France's in response to the formation of the colonial Ohio Company—and the first of these was buried in Warren[2] but ultimately control was transferred to the British after the French and Indian War. After the Revolutionary War, General William Irvine and Andrew Ellicott were sent to the area to lay out a town in 1795. It was named after Major General Joseph Warren.[3] The first permanent structure in Warren, a storehouse built by the Holland Land Company, was completed in 1796. Daniel McQuay of Ireland was the first permanent inhabitant of European descent. Lumber was the main industry from 1810–1840, as the abundance of wood and access to water made it profitable to float lumber down the Allegheny River to Pittsburgh.

David Beaty discovered oil in Warren in 1875 while drilling for natural gas in his wife's flower garden. Oil came to dominate the city's economy. Many of the town's large Victorian homes were built with revenue generated by the local oil and timber industries.

In recent years, Warren has struggled through hard economic times and a steady decline in population (after peaking at nearly 15,000 residents in 1940), but the city is attempting to bounce back with the Impact Warren project, a riverfront development project in downtown Warren. The completed project will include new townhouses and senior citizen housing, retail and commercial development, a parking garage, convention center and bus depot. 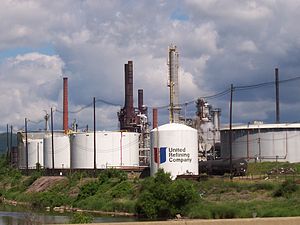 Warren is located at Lua error in Module:Coordinates at line 668: callParserFunction: function "#coordinates" was not found. (41.844133, -79.142443).[5] The city is located at the confluence of the Allegheny River and the Conewango Creek. The Conewango Creek flows between New York State and Warren, and the Allegheny Reservoir and Kinzua Dam are nearby.

The Allegheny River from the Kinzua Dam to the City of Warren has been designated a "Recreational Waterway" by the United States Congress.

There were 4,566 households out of which 27.2% had children under the age of 18 living with them, 43.0% were married couples living together, 10.8% had a female householder with no husband present, and 42.9% were non-families. 37.6% of all households were made up of individuals and 16.4% had someone living alone who was 65 years of age or older. The average household size was 2.17 and the average family size was 2.87.