Warren County is a county located in the U.S. state of Pennsylvania. As of the 2010 census, the population was 41,815.[1] Its county seat is Warren.[2] The county was formed in 1800 from parts of Allegheny and Lycoming counties; attached to Crawford County until 1805 and then to Venango County until Warren was formally organized in 1819.[3] 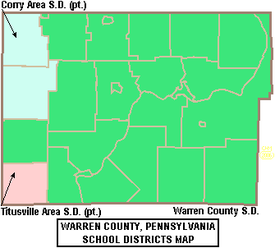 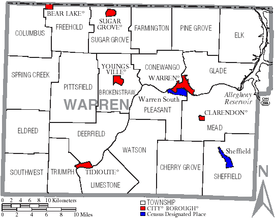 Under Pennsylvania law, there are four types of incorporated municipalities: cities, boroughs, townships, and, in at most two cases, towns. The following cities, boroughs and townships are located in Warren County:

Some communities are neither incorporated nor treated as census-designated places.