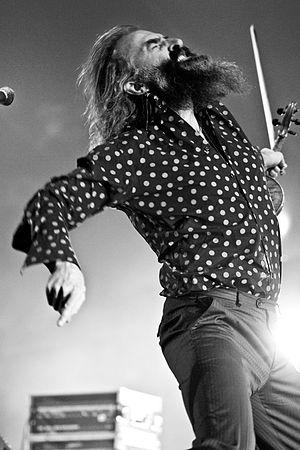 Warren Ellis of the Dirty Three performing at WOMADelaide 2012

Ellis was born in Ballarat, Victoria, Australia.[5] He won a scholarship to a private high school.[6] He learned classical violin and flute at school in Ballarat. Ellis then went to university in Melbourne, where he studied classical violin. After that he then worked briefly as a schoolteacher in country Victoria. In January 1988 he travelled to Europe, where he busked in Greece, Hungary, Scotland and Ireland. A year later he returned to Australia.[5][7] Ellis then wrote music for theatre groups and performed at art openings and plays in Melbourne, before he started playing in bands in the early nineties.[2][8]

In 1995, Ellis was invited to play with Nick Cave and the Bad Seeds on a recording; he remained with the band and continues to play and record with the Bad Seeds, and Grinderman, formed as a spin-off group from the Bad Seeds, who have released two albums.[2]

In 2002, Ellis released a solo album on King Crab records called Three Pieces for Violin. Since 2005 he has played on several Marianne Faithfull albums, and collaborated with Nick Cave exclusively; the two composed the award-winning score of the film The Proposition, and then collaborated again on the scores of The Assassination of Jesse James by the Coward Robert Ford, The Road and Far from Men.

Ellis has lived in Paris since 1998 with his French wife and their two children.[9][2]