Warwick is an affluent town in the southwest part of Orange County, New York, in the United States. Its population was 32,065 at the 2010 census. The town contains three villages (Village of Florida NY, Village of Greenwood Lake, and Village of Warwick a village also named Warwick) and eight hamlets (Amity, Bellvale, Edenville, Greenwood Forest Farms, Little York, New Milford, Pine Island, and Sterling Forest), and is the second largest town in the State of New York. Warwick is the home of the annual Applefest, the Summer Arts Festival, The Black Dirt Feast, the Hudson Valley Jazz Festival, and other events and festivals. 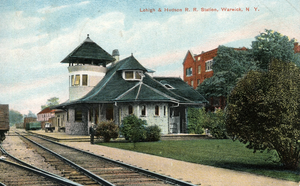 The region has been referred to as Warwick since the early eighteenth century; the town of Warwick was officially created in 1788.[3] During the American War for Independence, Warwick was the site of a Continental Army encampment. The Hudson River Chain was forged at Stirling Iron Works in Warwick, preventing the British Navy from sailing up the Hudson River. In 1783, George Washington traveled through Warwick, stopping at Baird's Tavern and spending the night in the home of John Hathorn.

Warwick is situated along a freight rail line, which, along with many other towns in Orange County (Goshen, Middletown, Newburgh), contributed to the growth of the area. The nineteenth-century writer and naturalist Henry William Herbert, writing as Frank Forrester, popularized the area with his 1845 book, "The Warwick Woodlands."[4] Today the town of Warwick is a rural community with many agricultural pursuits that stimulate its economy. 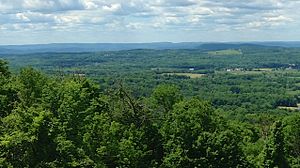 View of the Warwick Valley from Mt. Peter

The town of Warwick comprises the southern tip of Orange County. It borders the townships of Vernon and West Milford to the south, both in the state of New Jersey. To its north, Warwick is bordered by Chester via Sugar Loaf, Orange County's oldest hamlet, predating both Warwick and Chester, and part of Warwick until the mid-nineteenth century. To its east, Warwick is bordered by the town of Tuxedo, home of the New York Renaissance Faire and the hamlet of Tuxedo Park.

According to the United States Census Bureau, the town is the second largest township in New York State and has a total area of 104.9 square miles (271.6 km²), of which, 101.7 square miles (263.3 km²) of it is land and 3.2 square miles (8.3 km²) of it (3.04%) is water. Greenwood Lake is Orange County's largest lake, and is bisected by the border between New Jersey (to the south) and New York (on its north). Glenmere Lake, an extremely critical endangered species habitat, is bisected by Warwick and Chester.

Warwick is served by Warwick Municipal Airport and two regional state highways, New York State Route 17A (NY 17A) and NY 94. The Appalachian Trail passes through Warwick, which has been designated an Appalachian Trail Community.[5]

There were 10,868 households out of which 38.5% had children under the age of 18 living with them, 61.7% were married couples living together, 8.6% had a female householder with no husband present, and 26.8% were non-families. 22.0% of all households were made up of individuals and 9.1% had someone living alone who was 65 years of age or older. The average household size was 2.74 and the average family size was 3.25.

The Warwick Valley Central School District (WVCSD) serves as the public school system for Warwick residents and residents of the southern portion of the town of Chester. It does not serve all of the residents in the town of Warwick; the Village of Greenwood Lake, and the Village of Florida have their own school districts.

Since its first appearance in 1989, Applefest has been selected as one of the top ten festivals in the "Top 100 Events in North America" by the American Bus Association attracting up to 35,000 people each year. It features food and artisan vendors, games and rides, and live music. Each year, Applefest is held on the first Sunday in October; in 2012, however, the festival was pushed back a week, to October 14, to avoid conflicting with Columbus Day weekend.[8]

In addition to Applefest, since 2000 the Warwick Summer Arts Festival,has been held in local agricultural settings bringing art and concerts to various locations.Founded by Elizabeth Reese, the WSAF has brought crowds to underused parks, established a performance venue on a farm in the middle of the Black Dirt and established an annual Main St. storefront art exhibit. There are regular smaller events such as Art on The Green, the Village Concert Series, and Music in the Courtyard on Railroad Avenue, which features live music.

"Ladies Night Out" first held in August 1997, started with a few local merchants offering some in store specials, promotions over wine and cheese, has now become a village wide, merchant guild sponsored event that draws thousands of women (and men) into the village at the end of August every year. Besides late night shopping, there are dozens of street vendors, music and dance demonstrations and the crowning of the "Queen for a Day" winner.

In 2012 the Warwick Merchants Guild teamed up with Bon Secours Charity Health System to host their first "Pink Friday" which will be held in October each year in conjunction with Breast Cancer Awareness Month. Following the very successful format of their Annual Ladies Night Out celebration... This event raises money and awareness for Breast Cancer and for the Miles of Hope Breast Cancer Foundation of the Hudson Valley.

The annual “Warwick Valley Bridal Trail”, an event that includes wedding-themed vendors and held in the downtown business and historical district, has also become popular.

One of the few remaining independent radio stations in the Hudson Valley (and the only one in Orange County), is WTBQ, which has broadcast from the Town of Warwick since 1969. WTBQ's studios were originally in the village of Warwick, then moved to the village of Florida in 1984 when polka king Jimmy Sturr purchased the station. WTBQ now currently broadcasts from "The Old Barn" at 179 Sanfordville Road, just south of the village of Warwick.

Although there are only eight official hamlets in the Town of Warwick, several additional districts have maintained unique characteristics since pre-Revolutionary days. These include the following: