Washburn University (WU) is a co-educational, public institution of higher learning in Topeka, Kansas, United States. It offers undergraduate and graduate programs, as well as professional programs in law and business. Washburn has 550 faculty members, who teach more than 6,100 undergraduate students and nearly 800 graduate students. The university's assets include a $152 million endowment.

Washburn University was established in February 1865 as Lincoln College by a charter issued by the State of Kansas and the General Association of Congregational Ministers and Churches of Kansas on land donated by abolitionist John Ritchie. The school was renamed Washburn College in 1868 after Ichabod Washburn pledged $25,000 to the school. Washburn was a church deacon, abolitionist and industrialist who resided in Worcester, Massachusetts.[5]

In 1913 the medical department of Washburn College closed. Previously the Kansas Medical School had become infamous on December 10, 1895, when it was discovered that some of the bodies used for anatomical study had been stolen from local cemeteries. As the news was being printed (eventually across the country) the governor called out state troops to protect the school in fear of a riot. Three of the doctors, including the Dean of the school, and a janitor/student from the school were arrested as well as one man not a member of the school. Charges against the doctors were discharged, the janitor was convicted but had his conviction reversed on appeal and the final man was convicted but later pardoned.[5]

During World War II, Washburn Municipal University was one of 131 colleges and universities nationally that took part in the V-12 Navy College Training Program which offered students a path to a Navy commission.[6]

On June 8, 1966, only a few days after classes were dismissed for the summer, much of the campus was demolished by a tornado, and completely denuded of trees.[7] Three months before the tornado struck, the Washburn Board of Trustees had reinsured every building on campus for the maximum amount. A week after the tornado struck, summer classes began at Topeka West High School. By the fall of 1966, Stoffer Hall was repaired and trailers were in place. It took years to reconstruct the campus, with students attending classes in trailers well into the early 1970s.[5]

Formerly a municipal university, the university's primary funding was moved from city property tax to county sales tax sources in 1999, with the school retaining status as a municipal subdivision of the state.[5] Washburn is governed by its own nine-member Board of Regents.[8]

President and the Board 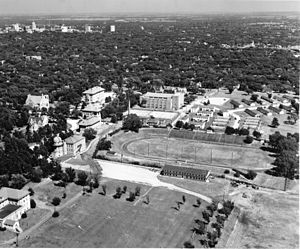 Aerial view of Washburn campus in 1948 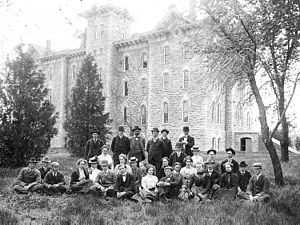 The president of Washburn University is Jerry Farley, who has served as president since 1997 and taken an active approach in improving academics and student life. Washburn University is governed by a nine-member Board of Regents. Three, who must be residents of the state of Kansas, are appointed by the Governor. Three residents of the City of Topeka, one from each of the state senatorial districts, are appointed by the Mayor. One is the Mayor or a member of the governing body of the city designated by the Mayor. The Shawnee County Commission appoints one member, who must be a resident of Shawnee County but not of the City of Topeka. The Kansas Board of Regents annually selects one of its members to serve on the Washburn Board. Members of the Board (with the exception of the Kansas Board of Regents' appointee) serve staggered four-year terms.[8]

These persons have served as presidents or interim presidents of Washburn College (1869–1940), Washburn Municipal University of Topeka (1941–1952), and Washburn University (1952–present).[9]

Formed in 1903[11] the Washburn School of Law was one of the first in the country to have a legal clinic where students are able to actively practice the legal profession. Today, it is in the minority of law schools to employ a full-time faculty for its law clinic.[citation needed] The Washburn School of Law had the highest pass rate of the Kansas State Bar Exam of any law school in the state of Kansas.[citation needed] The Washburn Law Library houses over 380,000 volumes and is the largest in the state.[12] It has been ranked as one of the top 20 law school libraries in the country.[13] Notable alumni include Bob Dole, Roy Wilford Riegle, Dennis Moore, Kim Phillips, Bill Kurtis and Fred Phelps.

The main buildings of Washburn University are all dedicated to someone or of are important part in Washburn's history.[14]