Washington's Birthday is a United States federal holiday celebrated on the third Monday of February in honor of George Washington, the first President of the United States, who was born on February 22, 1731. It can occur on the 15th through the 21st of February inclusive.

Colloquially, it is now widely known as Presidents Day, a term deliberately coined to change the holiday into one honoring multiple presidents,[1] and is often an occasion to remember all the presidents, not just George Washington.[2][3] 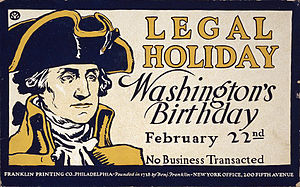 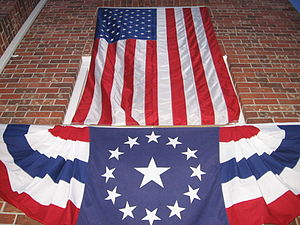 Although Lincoln's birthday, February 12, was never a federal holiday, nearly half of the state governments have officially renamed their Washington's Birthday observances as "Presidents' Day", "Washington and Lincoln Day", or other such designations. (In historical rankings of Presidents of the United States Lincoln and Washington are frequently, but not always, the top two presidents.) However, "Presidents' Day" is not always an all-inclusive term and might refer to only a selection of presidents.

In the following states and possessions, Washington's Birthday is an official state holiday and known as:[4]

Washington and another person

Several states honor presidents with official state holidays that do not fall on the third Monday of February. In Massachusetts, the state officially celebrates "Washington's Birthday" on the same day as the Federal holiday. State law also directs the governor to issue an annual "Presidents Day" proclamation on May 29 (John F. Kennedy's birthday), honoring the presidents with Massachusetts roots: Kennedy, John Adams, John Quincy Adams, and Calvin Coolidge.[14] In California,[15] Connecticut, Missouri, and Illinois, while Washington's Birthday is a federal holiday, Abraham Lincoln's birthday is still a state holiday, falling on February 12 regardless of the day of the week.

The federal holiday honoring Washington was originally implemented by an Act of Congress in 1879 for government offices in Washington (20 Stat. 277) and expanded in 1885 to include all federal offices (23 Stat. 516). As the first federal holiday to honor an American president, the holiday was celebrated on Washington's actual birthday, February 22.[19] On January 1, 1971, the federal holiday was shifted to the third Monday in February by the Uniform Monday Holiday Act.[20] This date places it between February 15 and 21, which makes the name "Washington's Birthday" in some sense a misnomer, since it never occurs on Washington's actual birthday, February 22. (A rough analog of this phenomenon can be seen in Commonwealth realms, where the reigning monarch's official birthday is celebrated without regard to their actual date of birth.)

The first attempt to create a Presidents Day occurred in 1951 when the "President's Day National Committee" was formed by Harold Stonebridge Fischer of Compton, California, who became its National Executive Director for the next two decades. The purpose was not to honor any particular President but to honor the office of the Presidency. It was first thought that March 4, the original inauguration day, should be deemed Presidents Day. However, the bill recognizing the March 4 date was stalled in the Senate Judiciary Committee (which had authority over federal holidays). That committee felt that, because of its proximity to Lincoln's and Washington's Birthdays, three holidays so close together would be unduly burdensome.[citation needed] During this time, however, the Governors of a majority of the individual states issued proclamations declaring March 4 to be Presidents' Day in their respective jurisdictions.

An early draft of the Uniform Monday Holiday Act would have renamed the holiday to "Presidents' Day" to honor the birthdays of both Washington and Lincoln, which would explain why the chosen date falls between the two, but this proposal failed in committee, and the bill was voted on and signed into law on June 28, 1968, keeping the name as Washington's Birthday.

By the mid-1980s, with a push from advertisers, the term "Presidents' Day" began its public appearance.[1]

In Washington's adopted hometown of Alexandria, Virginia, celebrations are held throughout the month of February.[21] 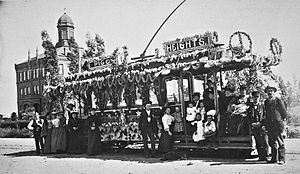 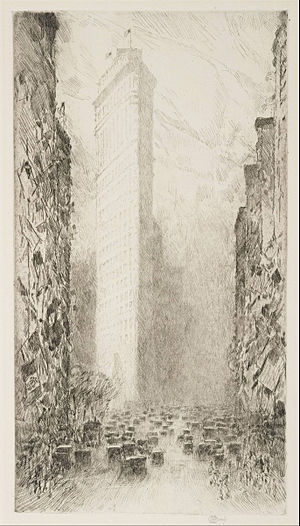 Today, the February holiday has become well known for being a day in which many stores, especially car dealers, hold sales. Until the late 1980s, corporate businesses generally closed on this day, similar to present corporate practices on Memorial Day or Christmas Day. With the late 1980s advertising push to rename the holiday, more and more businesses are staying open on the holiday each year, and, as on Martin Luther King Jr. Day, Veterans Day and Columbus Day, most delivery services outside of the U.S. Postal Service now offer regular service on the day as well. Some public transit systems have also gone to regular schedules on the day. Many colleges and universities hold regular classes and operations on Presidents' Day. Various theories exist for this, one accepted reason being to make up for the growing trend of corporations to close in observance of the Birthday of Martin Luther King, Jr.[citation needed] Conversely, many schools and businesses formerly open on this day began closing after the observance of Dr. King's birthday holiday became prevalent. This was done in order not to diminish Washington's birthday in comparison to King's. However, when reviewing the Uniform Monday Holiday Bill debate of 1968 in the Congressional Record, one notes that supporters of the Bill were intent on moving federal holidays to Mondays to promote business.

Consequently, some schools, which used to close for a single day for both Lincoln's and Washington's birthday, now often close for the entire week (beginning with the Monday holiday) as a "mid-winter recess". For example, the New York City school district began doing so in the 1990s.

The federal holiday Washington's Birthday honors the accomplishments of the man known as "The Father of his Country". Celebrated for his leadership in the founding of the nation, he was the Electoral College's unanimous choice to become the first President; he was seen as a unifying force for the new republic and set an example for future holders of the office.

The holiday is also a tribute to the general who created the first military badge of merit for the common soldier. Revived on Washington's 200th birthday in 1932, the Purple Heart medal (which bears Washington's image) is awarded to soldiers who are injured in battle. As with Memorial Day and Veterans Day, Washington's Birthday offers another opportunity to honor the country's veterans.

Community celebrations often display a lengthy heritage. Washington's hometown of historic Alexandria, Virginia, hosts a month-long tribute, including the longest running George Washington Birthday parade, while the community of Eustis, Florida, continues its annual "George Fest" celebration begun in 1902. In Denver, Colorado there is a society dedicated to observing the day.[22] At the George Washington Birthplace National Monument in Westmoreland County, Virginia, and at Mount Vernon, visitors are treated to birthday celebrations throughout the federal holiday weekend and through February 22.

In 2007 the country celebrated both Washington's 275th birthday and the 75th anniversary of the rebirth of the Purple Heart medal.

Since 1862 there has been a tradition in the United States Senate that George Washington's Farewell Address[23] be read on his birthday. Citizens had asked that this be done in light of the approaching Civil War. The annual tradition continues with the reading of the address on or near Washington's Birthday.

Because "Presidents' Day" is not the official name of the federal holiday there is variation in how it is rendered, both colloquially and in the name of official state holidays.[24]

When used with the intention of celebrating more than one individual, the form "Presidents' Day" was usual in the past. In recent years as the use of attributive nouns (nouns acting as modifiers) has become more widespread, the popularity of the form "Presidents Day" has increased[25] - this is the style favored by the Associated Press Stylebook, and followed by most newspapers and some magazines.[26]

"President's Day" as an alternate rendering of "Washington's Birthday," or for the purpose of commemorating the presidency as an institution, is a proper use of a possessive and is the legal spelling in eight states.[27] It is however a misspelling when used with the intention of celebrating more than one individual (see also apostrophe).