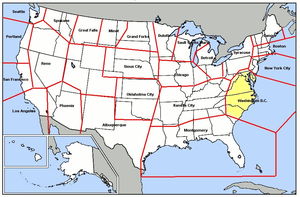 WaADS was established in December 1956 as the 4625th Air Defense Wing.[1] It was not assigned any units until 1958 when it assumed control of former ADC Eastern Air Defense Force units primarily in Maryland, Delaware, and Virginia.[2] Units of the 32d Air Division in North and South Carolina were transferred to WaADS in 1961 as the 26th Air Division area of responsibility expanded southward.[3] The organization provided command and control over several aircraft, missile and radar squadrons.

The sector was eliminated on 1 April 1966 due to a general reorganization of Air Defense Command, most of its assigned units being reassigned to the 33d Air Division