Washington County is a county located in the western part of the U.S. state of Maryland. As of the 2010 U.S. Census, the population was 147,430.[1] Its county seat is Hagerstown.[2] Washington County was the first county in the United States to be named for the Revolutionary War general (and later President) George Washington. Washington County is one of three Maryland counties recognized by the Appalachian Regional Commission as being part of Appalachia.[3] 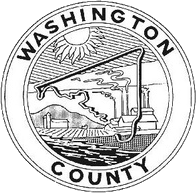 A number of properties in the county are listed on the National Register of Historic Places.[5]

Washington County is located in the Appalachian Mountains, stretching from the Ridge-and-Valley Country in the west to South Mountain in the east, which is an extension of the Blue Ridge. Much of the county lies in the broad Hagerstown Valley between these two zones; the valley is part of the Great Appalachian Valley that continues southward into Virginia and West Virginia as the Shenandoah Valley and northward into Pennsylvania as the Cumberland Valley.

The county is bordered to the north by the Mason–Dixon line with Pennsylvania, to the south by the Potomac River and the states of Virginia and West Virginia, to the west by Sideling Hill Creek and Allegany County, Maryland, and to the east by Frederick County and South Mountain.

The county is located within Maryland's 6th congressional district. The representative of the district currently is John Delaney (D).

According to the 2010 United States Census, Washington County's population was:

According to the Maryland Department of Business and Economic Development, the following were the major employers in the county (excluding post offices, state government, and local governments, but including public institutions of higher education):[14] 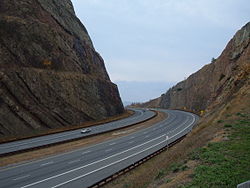 Museums, historic sites, and other points of interest 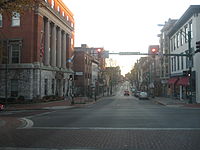 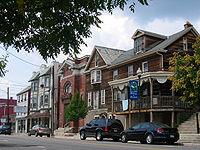 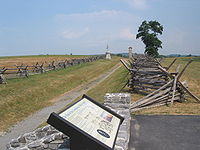