Cities in Washington County include Hillsboro, Beaverton, Tigard, and Forest Grove, the oldest city in the county.[4]

Originally named Twality when created in 1843, the territorial legislature renamed it for the first president of the United States, George Washington, in 1849. The original boundaries included the entire northwest corner of Oregon before sections became new counties. The Tualatin River and its drainage basin are almost entirely within the county, with the county nearly coterminous with the Tualatin Valley. It is bordered on the west and north by the Northern Oregon Coast Range, on the south by the Chehalem Mountains, and on the north and east by the Tualatin Mountains (or West Hills). 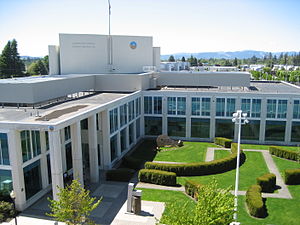 The Provisional Legislature of Oregon created the county as Twality District on July 5, 1843.[5] Twality was one of the original four districts of the Provisional Government of Oregon in Oregon Country along with Clackamas, Champooick (later Marion), and Yamhill counties. Columbia, later known as Hillsboro, was selected as the county seat in 1850. Washington County obtained its present boundaries in 1854 with the creation of Columbia County to the north and Multnomah County to the east.[5]

The construction of Canyon Road to Beaverton helped Portland to consolidate its position as the primary port of Oregon, and defeat the rival efforts of settlements such as Oregon City and Milwaukie.

In November 2004, the County and the City of Beaverton agreed to a plan where the city would annex both unincorporated residential neighborhoods as well as high-value areas of land. This would result with Cedar Hills, Garden Home, Raleigh Hills, West Slope being incorporated by 2010, and the communities of Aloha, Bethany, and Cedar Mill at some point after that.

Those plans have since been put on hold after Beaverton attempted to forcibly annex Nike, Inc.'s World Headquarters, which would have increased Nike's taxes substantially. Nike successfully lobbied the legislature for a law that would prohibit their annexation for 99 years. Since that decision, annexation plans have been halted, and Washington County started urban planning to provide city-level services to the unincorporated urban areas in the county.[6]

The Tualatin River is the main river in Washington County. Henry Hagg Lake, southwest of Forest Grove, is the largest lake. The Willamette River lies to the east, the Columbia River to the northeast, and the Pacific Ocean to the west of the county. 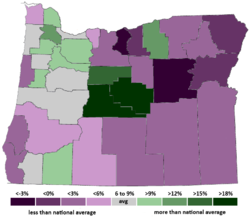 From 2000 to 2007, Washington County's population growth was 14.8%, twice the national average. It was the fastest growing county in the Portland metropolitan area. 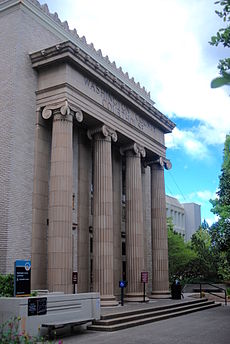 The Washington County Courthouse in Hillsboro

Washington County is centered on a fertile plain that attracted farmers before the first wagon trains. In 1997, orchards covered 8,403 acres (34 km²) of the county's lands and 1,163 acres (4.7 km²) were devoted to vineyards.[citation needed] Agriculture is still a major industry in Washington County, as are lumber, manufacturing, and food processing. (The county is home to Roloff Farms, featured in the TV show Little People, Big World.)

The development of a large electronics industry during the 1980s and 1990s is the dominating factor of the county economy. California-based Intel, Oregon's largest private for-profit employer, has its largest concentration of employees in the county, mainly in Hillsboro.[citation needed] Other technology companies include Electro Scientific Industries, Lattice Semiconductor, FEI Company, Merix, TriQuint Semiconductor, Tektronix, SolarWorld, Planar Systems, and EPSON.[citation needed]

Nike, one of two Fortune 500 corporations based in Oregon, has its headquarters in Washington County. Until it was acquired by IBM, Sequent Computer Systems was headquartered right next door to Nike. The facility is now host to a number of software groups for IBM, including one of its Linux Technology Centers. Other companies with headquarters in Washington County include optical instruments manufacturer Leupold & Stevens, Columbia Sportswear, and Reser's Fine Foods. 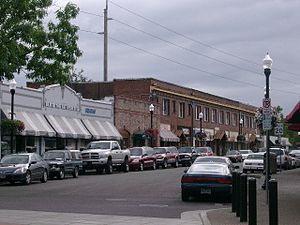 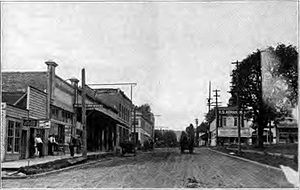