Washingtonville is a village in Orange County, New York, United States. The population was 5,899 at the 2010 census. It is part of the Poughkeepsie–Newburgh–Middletown, NY Metropolitan Statistical Area as well as the larger New York–Newark–Bridgeport, NY-NJ-CT-PA Combined Statistical Area. The village is named in honor of George Washington.

The Village of Washingtonville is within the Town of Blooming Grove.

Washingtonville was first settled in 1731. The village maintained a slow but steady growth during the second half of the 18th century. In 1809, John Jaques, a boot and shoemaker, set up his shop in this tiny settlement of nine houses, then known as "Little York." Jaques would later establish Brotherhood Winery, the oldest continuously operating winery in the United States, in 1839.

In its earlier years, Washingtonville was called "Matthews Field," even before it became known as Little York. A part of the Rip Van Dam patent, it was sold to Vincent Matthews in 1721. Matthews was the second settler of the region, although the first white settler. Its earliest known inhabitant was an Indian by the name of Moringamus, whose wigwam or tepee was once pitched in back of where the Coleman bottled-gas plant is located now. 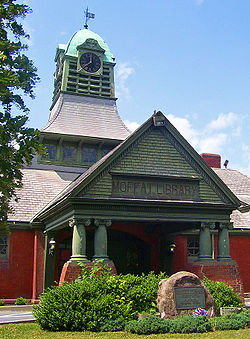 The Moffat Library, a Registered Historic Place built by Samuel's son David as a gift to his hometown.

Samuel Moffat built a trading post on the village square in 1811 at the junction of the New Windsor and Blooming Grove Turnpike with the Goshen Road (His son David later endowed Moffat Library on the spot). The hamlet began to prosper with a tannery, grist and plaster mills. A hotel was needed and Samuel Moffat built his Washington Tavern in 1818. The same year Samuel and John Jaques bestowed the village with a new name, Washingtonville, in honor of the late general and first president of the United States, whom it was said came through and watered his horse at the trough which had been located under the big Elm tree in the center of the village.

Washingtonville grew after the New York, Lake Erie and Western Railway built its branch through the village in 1850. Even though the railway tracks have been removed, the remains of the railroad building are located behind the present day Agway Store. Incorporated in 1895, the village had become an important dairying center where two creameries, Borden's (presently used as a bus garage for the Washingtonville Central School District) and the Farmers Cooperative Market (South Street), several groceries, a bank, feed and lumber dealers, wagon shops, furniture makers and a hub shop all prospered. Its greatest growth in that time occurred in the seventh and eighth decades.

C.R. Shons opened up a cooperative on Depot Street, where the old red building still stands, and also had a large orchard on Goshen Avenue. Thomas Fulton's grist mill, now the site of Agway, was destroyed by fire in the early 1900s. Hugh Lunney had his slaughter house on Goshen Avenue, near where the Spear Printing Company plant was, and also had a large ice house beside the point to Coopers Creek, harvesting ice for commercial use from the pond in the winter.

Borden's Creamery maintained a bottling plant and its refrigerator cars, loaded with milk, were shipped to Greycourt (Harriman) on either the Erie freight or passenger runs. This firm cut its ice from the small pond south of its creamery, storing it in the ice house on the east side of the plant.

From the evening of Sunday, April 15 until Tuesday, April 17, 2007, the nearby Moodna Creek overflowed into downtown Washingtonville. Nearby May's Field resembled a lake with 3–4 feet of water. A similar flooding occurred in 1955. These floodings were the results of a powerful Nor'easter that slammed the Northeastern U.S. Videos of the flooding were featured on the websites of WCBS-TV, Cable 6 News, and the Times Herald Record. Pictures were posted on the high school's website.[3]

On Sunday, August 28, 2011, Washingtonville was ravaged by a Category 1 hurricane. Despite being just a Category 1 storm, the hurricane caused widespread flooding in the town, initiating a mandatory evacuation. The flooding was mostly due to the town being situated in a basin of the Moodna Creek, which surrounds the town. Shelters for the affected were set up in a nearby elementary school and gym.

On Saturday, October 29, 2011, Washingtonville was also ravaged by an unexpected early snow storm. Up to a foot of heavy wet snow fell on the town. The major problem is that the leaves had not fallen off the trees yet, so limbs and branches had fallen blocking most roads including State Route 94. Over 90% of residents were left without power.

Tony Gilroy, writer and director, grew up in what is now South Blooming Grove and attended Washingtonville High School. His film credits include The Bourne Trilogy (screenwriter) and Michael Clayton (writer/director).

James Mangold, a director and screenwriter, graduated from Washingtonville High School. His notable works include 3:10 to Yuma, Knight and Day and Walk the Line. His movie Cop Land is based on Washingtonville and its many NYPD residents. 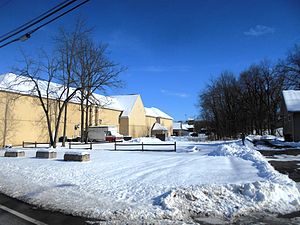 According to the United States Census Bureau, the village has a total area of 2.5 square miles (6.5 km2), all of it land.

Washingtonville is at the junction of highways NY-94 and NY-208.

There were 2,177 households out of which 35.9% had children under the age of 18 living with them, 55.5% were married couples living together, 17.4% had a female householder with no husband present, 9.2% had a male householder with no wife present and 30.5% were non-families. 26.6% of all households were made up of individuals and 15.4% had someone living alone who was 65 years of age or older. The average household size was 2.71 and the average family size was 3.32.