From Infogalactic: the planetary knowledge core
Jump to: navigation, search
"Here we come a-wassailing" performed by the U.S. Army Band

Origins of wassailing and Yulesinging

How far the tradition of wassailing dates back is unknown, but it has connections with Anglo-Saxon traditions; the word wassail comes from the Anglo-Saxon toast Wæs þu hæl, meaning "be thou hale"—i.e., "be in good health". Thus wassailing likely predates the Norman conquest in 1066.

According to the Oxford English Dictionary "waes hael" is the Middle English (and hence post-Norman) spelling parallel to OE "wes hal".[4] The American Heritage Dictionary, fifth edition, gives Old Norse "ves heill" as the source of Middle English "waeshaeil".[5] The correct response to the toast is Drinc hæl.[6]

In recent times, the toast has come to be synonymous with Christmas, but since Christianity gradually replaced the indigenous Anglo-Saxon religion around the 7th and 8th centuries, there is no evidence that the traditional ceremony of wassailing is Christian in origin.

Traditionally, the wassail is celebrated on Twelfth Night (variously on either January 5 or 6). Some people still wassail on "Old Twelvey Night", January 17, as it would have been before the introduction of the Gregorian Calendar in 1752.[6]

In the middle ages, the wassail was a reciprocal exchange between the feudal lords and their peasants as a form of recipient-initiated charitable giving, to be distinguished from begging. This point is made in the song "Here We Come A-Wassailing", when the wassailers inform the lord of the house that

we are not daily beggars that beg from door to door
But we are friendly neighbours whom you have seen before.

The lord of the manor would give food and drink to the peasants in exchange for their blessing and goodwill, i.e.

Love and joy come to you,
And to you your wassail too;
And God bless you and send you
a Happy New Year

This would be given in the form of the song being sung. Wassailing is the background practice against which an English carol such as "We Wish You a Merry Christmas" dating back to sixteenth century England, can be made sense of.[7] The carol lies in the English tradition where wealthy people of the community gave Christmas treats to the carolers on Christmas Eve such as 'figgy puddings'.[8]

Although wassailing is often described in innocuous and sometimes nostalgic terms, the practice in England has not always been considered so innocent. Wassailing was associated with rowdy bands of young men who would enter the homes of wealthy neighbours and demand free food and drink (in a manner similar to the modern children's Halloween practice of trick-or-treating).[9] If the householder refused, he was usually cursed, and occasionally his house was vandalized. The example of the exchange is seen in their demand for "figgy pudding" and "good cheer", i.e., the wassail beverage, without which the wassailers in the song will not leave; "We won't go until we get some, so bring some out here".[8]

In the cider-producing West of England (primarily the counties of Devon, Somerset, Dorset, Gloucestershire and Herefordshire) wassailing also refers to drinking (and singing) the health of trees in the hopes that they might better thrive.

Wassaile the trees, that they may beare
You many a Plum and many a Peare:
For more or lesse fruits they will bring,
As you do give them Wassailing. 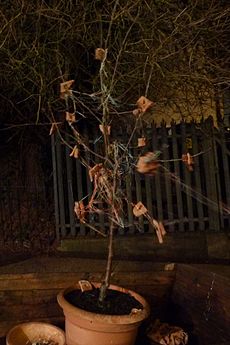 An apple sapling, hung with toast, placed in a handcart and pushed around the streets during the Chepstow Mari Lwyd, 2014

The purpose of wassailing is to awake the cider apple trees and to scare away evil spirits to ensure a good harvest of fruit in the Autumn.[10] The ceremonies of each wassail vary from village to village but they generally all have the same core elements. A wassail King and Queen lead the song and/or a processional tune to be played/sung from one orchard to the next, the wassail Queen will then be lifted up into the boughs of the tree where she will place toast soaked in Wassail from the Clayen Cup as a gift to the tree spirits (and to show the fruits created the previous year). Then an incantation is usually recited such as

Then the assembled crowd will sing and shout and bang drums and pots & pans and generally make a terrible racket until the gunsmen give a great final volley through the branches to make sure the work is done and then off to the next orchard. Perhaps unbeknown to the general public, this ancient English tradition is still very much thriving today. The West Country is the most famous and largest cider producing region of the country and some of the most important wassails are held annually in Carhampton and Dunster (Somerset) and Whimple and Sandford (Devon), all on 17 January (old Twelfth Night).

Clevedon (North Somerset) holds an annual Wassailing event in the popularly attended Clevedon Community Orchard, combining the traditional elements of the festival with the entertainment and music of the Bristol Morris Men and their cantankerous Horse.

Private readings about people in Somerset in the 1800s revealed that inhabitants of Somerset practised the old Wassailing Ceremony, singing the following lyrics after drinking the cider until they were "merry and gay:"

A folktale from Somerset reflecting this custom tells of the "Apple Tree Man", the spirit of the oldest apple tree in an orchard, and in whom the fertility of the orchard is said to reside. In the tale a man offers his last mug of mulled cider to the trees in his orchard and is rewarded by the Apple Tree Man who reveals to him the location of buried treasure.[12][13] 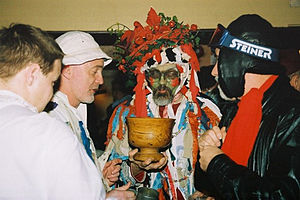 Wassail bowls, generally in the shape of goblets, have been preserved. The Worshipful Company of Grocers made a very elaborate one in the seventeenth century, decorated with silver.[14] It is so large that it must have passed around as a "loving cup" so that many members of the guild could drink from it.[citation needed]

In the British Christmas carol "Wassail, Wassail, All Over the Town", the singers tell that their "bowl is made of the white maple tree, with a wassailing bowl we'll drink to thee". White maple is a completely flavorless wood, commonly used even today to make some kitchen utensils, and likely was what many simple peasant wassail bowls were made from. Variants may be sung where the Wassail bowl is made of other woods, e.g. "Sycamore tree", "grand old Oak tree", and so on.

There are surviving examples of "puzzle wassail bowls", with many spouts. As you attempt to drink from one of the spouts, you are drenched from another spout. The drink was either punch, mulled wine or spicy ale.