From Infogalactic: the planetary knowledge core
(Redirected from Water Lilies)
Jump to: navigation, search
This article is about the series of paintings. For other uses, see Water lily. 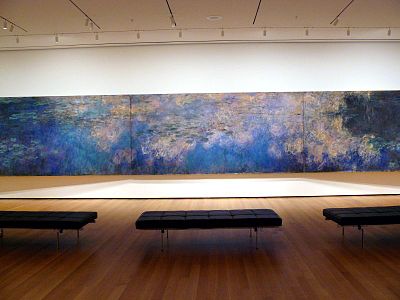 Water Lilies (or Nymphéas, French: [nɛ̃.fe.a]) is a series of approximately 250 oil paintings by French Impressionist Claude Monet (1840–1926). The paintings depict Monet's flower garden at Giverny and were the main focus of Monet's artistic production during the last thirty years of his life. Many of the works were painted while Monet suffered from cataracts.[1]

Monet's long preference for producing and exhibiting a series of paintings related by subject and perspective began in 1889, with at least ten paintings done at the Valley of the Creuse, which were shown at the Galerie Georges Petit.[2] Among his other famous series are his Haystacks.

The paintings are on display at museums all over the world, including the Musée Marmottan Monet[4] and the musée d'Orsay in Paris, the Metropolitan Museum of Art and Museum of Modern Art in New York,[5] the Art Institute of Chicago,[6] the Saint Louis Art Museum,[7] the Nelson-Atkins Museum of Art in Kansas City, Missouri,[8] the Carnegie Museum of Art, the National Museum of Wales, the Musée des Beaux-Arts de Nantes, the Cleveland Museum of Art,[9] the Portland Art Museum and the Legion of Honor.[10]

The paintings at auction

In May 2010, it was announced that the 1906 Nymphéas work would be auctioned in London in June 2010, the painting had an estimated sale price of between £30 and £40 million.[13] Giovanna Bertazzoni, Christie's auction house director and head of impressionist and modern art, said, "Claude Monet's water-lily paintings are amongst the most recognised and celebrated works of the 20th Century and were hugely influential to many of the following generations of artists."[13] The sale took place on 23 June 2010 at the auction house and the painting attracted bids of up to £29 million, but it ultimately failed to sell.[14]