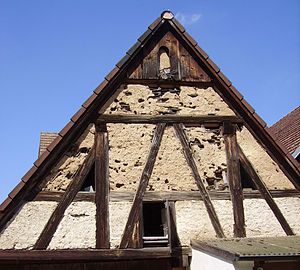 Wattle and daub in wooden frames

Wattle and daub is a composite building material used for making walls, in which a woven lattice of wooden strips called wattle is daubed with a sticky material usually made of some combination of wet soil, clay, sand, animal dung and straw. Wattle and daub has been used for at least 6000 years and is still an important construction material in many parts of the world. Many historic buildings include wattle and daub construction, and the technique is becoming popular again in more developed areas as a low-impact sustainable building technique. 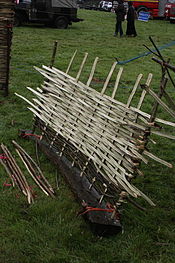 The wattle is made by weaving thin branches (either whole, or more usually split) or slats between upright stakes. The wattle may be made as loose panels, slotted between timber framing to make infill panels, or it may be made in place to form the whole of a wall.

Daub is usually created from a mixture of certain ingredients from three categories: binders, aggregates and reinforcement. Binders hold the mix together and can include clay, lime, chalk dust and limestone dust. Aggregates give the mix its bulk and dimensional stability through materials such as earth, sand, crushed chalk and crushed stone. Reinforcement is provided by straw, hair, hay or other fibrous materials, and helps to hold the mix together as well as to control shrinkage and provide flexibility.[1] The daub may be mixed by hand, or by treading – either by humans or livestock. It is then applied to the wattle and allowed to dry, and often then whitewashed to increase its resistance to rain.

This process is similar in modern architecture to lath and plaster, a common building material for wall and ceiling surfaces, in which a series of nailed wooden strips are covered with plaster smoothed into a flat surface. In some regions this building method has itself been overtaken by drywall construction using plasterboard sheets.

The wattle and daub technique was used already in the Neolithic period. It was common for houses of a Linear pottery and Rössen cultures of Central Europe, but is also found in Western Asia (Çatalhöyük, Shillourokambos) as well as in North America (Mississippian Culture) and South America (Brazil). In Africa it is common in the architecture of traditional houses such as those of the Ashanti people. Its usage dates back at least 6000 years. There are suggestions that construction techniques such as lath and plaster and even cob may have evolved from wattle and daub. Fragments from prehistoric wattle and daub buildings have been found in Africa, Europe, Mesoamerica and North America.[2] A review of English architecture especially reveals that the sophistication of this craft is dependent on the various styles of timber frame housing.[3] 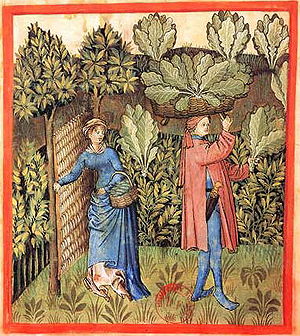 As discussed earlier, there were two popular choices for wattle and daub paneling: square paneling and close-studded paneling.

Close-studding panels create a much more narrow space between the timbers: anywhere from 7 to 16 inches (18 to 40 cm). For this style of panel, weaving is too difficult, so the wattles run horizontally and are known as ledgers. The ledgers are sprung into each upright timber (stud) through a system of augered holes on one side and short chiseled grooves along the other. The holes (along with holes of square paneling) are drilled at a slight angle towards the outer face of each stud. This allows room for upright hazels to be tied to ledgers from the inside of the building. The horizontal ledgers are placed every two to three feet (0.6 to 0.9 metres) with whole hazel rods positioned upright top to bottom and lashed to the ledgers. These hazel rods are generally tied a finger widths apart with 6-8 rods each with a 16-inch (40 cm) width. Gaps allow key[clarification needed] formation for drying.[4]

Square panels are large, wide panels typical of some later timber frame houses. These panels may be square in shape, or sometimes triangular to accommodate arched or decorative bracing. This style does require wattles to be woven for better support of the daub.

To insert wattles in a square panel several steps are required. First, a series of evenly spaced holes are drilled along the middle of the inner face of each upper timber. Next, a continuous groove is cut along the middle of each inner face of the lower timber in each panel. Vertical slender timbers, known as staves, are then inserted and these hold the whole panel within the timber frame. The staves are positioned into the holes and then sprung into the grooves. They must be placed with sufficient gaps to weave the flexible horizontal wattles.

The origin of the term wattle describing a group of acacias in Australia, is derived from the common use of acacias as wattle in early Australian European settlements.[5]

Pug and pine (or pine and pug)

In the early days of the colonisation of South Australia, in areas where substantial timber was unavailable, pioneers' cottages and other small buildings were frequently constructed with light vertical timbers, which may have been "native pine" (Callitris or Casuarina spp.), driven into the ground, the gaps being stopped with pug (kneaded clay and grass mixture). Another term for this construction is palisade and pug.[6]