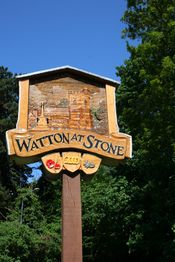 There is little employment directly within the village and it largely serves as a dormitory for commuters to London or to the nearby towns with hourly trains to Moorgate station.

The village has a primary school and nursery school. The co-educational Heath Mount independent school is located on the outskirts in the private estate of the Grade II* listed Woodhall Park.

The A602 formerly ran through the centre of the village between Stevenage and Hertford before a bypass was built in the 1980s through farmland to the north-east. The section of the road to Hertford was renamed the A119, and the A602 then ran out of Watton-at-Stone to Ware. Watton-at-Stone is served by a railway station on the Hertford Loop Line. The station opened for passengers on 2 June 1924, was closed on 11 September 1939 (though the line continued to run through the village), and reopened on 17 May 1982, paid for partly by public subscription.

A war memorial lies in a field adjoining the church.

In the village itself there is a small convenience store, cafe and takeaway restaurant as well as a hairdressers.

The name Watton first appeared in writing in an eleventh-century publication of tenth-century Anglo-Saxon wills as Wattun. It was later recorded in the Domesday Book as both Wodtune and Watone.[2] The origin of the word is uncertain, and is variously ascribed to Old English wád, or woad, and ton meaning small farming settlement; or waden meaning ford; or from waétan meaning watery. The suffix -at-Stone dates from the early thirteenth century and may be derived from the presence of two large examples of Hertfordshire puddingstone, now situated at the Waggon and Horses public house.[3]

However, it is far more likely that the suffix refers to the Roman Road (anciently described as a Stone Street) that ran from Verulamium (modern St Albans), fording the River Beane at Watton-at-Stone. The area where the bridge over the railway was built was shown on tithe maps as a common, and the fields to the east and west of this point were named Stoneyfield and Further Stoneyfield. It is deduced that the Roman Road passed through this area, and the later village took its name from the important routeway. In the 1950s, sections of the road agger, composed of large flint nodules, could still be seen at several points in the village; most obviously, the northern boundary of the grounds of Chestnut House preserves the line of the road [4] A battle between the Danes and Saxons took place nearby in 1016.[4] In later years, the natural springs in the area once made the village a popular spa town.[4]

The village has a number of dwellings dating from early Tudor, such as Watton House, through to late Georgian constructions.[2] Its flintstone rubble Anglican church dedicated to Saint Mary and Saint Andrew dates from the fifteenth century,[2][3] and is built in the Perpendicular style.[5]

The Iron Age Aston Mirror was found nearby, closer to Watton-at-Stone than to the village of Aston, but technically in Aston parish due to the convoluted border. It is now kept at the British Museum.[3] A collection of Belgic armour and weaponry was discovered in the mid-19th century by workers digging a drain at the north end of the village.

Watton-at-Stone is home to the boxing promoter Frank Warren. The Sun's racing tipster 'Templegate' was also a previous resident of the village. It was the birthplace and childhood home of the actor Rupert Grint, well-known from his role of Ron Weasley in the Harry Potter film series.[6]

The famous locomotive engineer Sir Nigel Gresley lived in Watton House until his death in 1941.[7] The evangelical author and social campaigner Edward Bickersteth was rector of the church for twenty years from 1830 until his death in 1850.[8][9] His one-time curate was the theological scholar Thomas Birks.[9]

The name is also spelled unhyphenated as Watton at Stone and appears in this form on Ordnance Survey maps. The County Council favours the hyphenated version. Both spellings are equally valid.