From Infogalactic: the planetary knowledge core
Jump to: navigation, search
For other uses, see Wax (disambiguation). 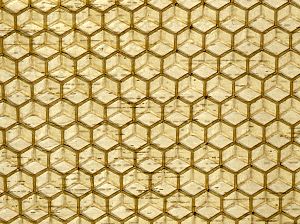 Waxes are a class of chemical compounds that are malleable near ambient temperatures. They are also a type of lipid. Characteristically, they melt above 45 °C (113 °F) to give a low viscosity liquid. Waxes are insoluble in water but soluble in organic, nonpolar solvents. All waxes are organic compounds, both synthetically and naturally occurring. 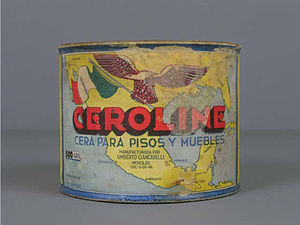 Ceroline brand wax for floors and furniture, first half of 20th century. From the Museo del Objeto del Objeto collection

Waxes are synthesized by many plants and animals. Those of animal origin typically consist of wax esters derived from a variety of carboxylic acids and fatty alcohols. In waxes of plant origin characteristic mixtures of unesterified hydrocarbons may predominate over esters.[1] The composition depends not only on species, but also on geographic location of the organism. Because they are mixtures, naturally produced waxes are softer and melt at lower temperatures than the pure components.[citation needed]

The most commonly known animal wax is beeswax, but other insects secrete waxes. A major component of the beeswax used in constructing honeycombs is the ester myricyl palmitate which is an ester of triacontanol and palmitic acid. Its melting point is 62-65 °C. Spermaceti occurs in large amounts in the head oil of the sperm whale. One of its main constituents is cetyl palmitate, another ester of a fatty acid and a fatty alcohol. Lanolin is a wax obtained from wool, consisting of esters of sterols.[2]

Plants secrete waxes into and on the surface of their cuticles as a way to control evaporation, wettability and hydration.[3] The epicuticular waxes of plants are mixtures of substituted long-chain aliphatic hydrocarbons, containing alkanes, alkyl esters, fatty acids, primary and secondary alcohols, diols, ketones, aldehydes.[1] From the commercial perspective, the most important plant wax is Carnauba wax, a hard wax obtained from the Brazilian palm Copernicia prunifera. Containing the ester myricyl cerotate, it has many applications, such as confectionery and other food coatings, car and furniture polish, floss coating, surfboard wax, and other uses. Other more specialized vegetable waxes include candelilla wax and ouricury wax.

Although many natural waxes contain esters, paraffin waxes are hydrocarbons, mixtures of alkanes usually in a homologous series of chain lengths. These materials represent a significant fraction of petroleum. They are refined by vacuum distillation. Paraffin waxes are mixtures of saturated n- and iso- alkanes, naphthenes, and alkyl- and naphthene-substituted aromatic compounds. The degree of branching has an important influence on the properties. Millions of tons of paraffin waxes are produced annually. They are used in foods (such as chewing gum and cheese wrapping), in candles and cosmetics, as non-stick and waterproofing coatings and in polishes.

Montan wax is a fossilized wax extracted from coal and lignite. It is very hard, reflecting the high concentration of saturated fatty acids and alcohols. Although dark brown and smelly, they can be purified and bleached to give commercially useful products. 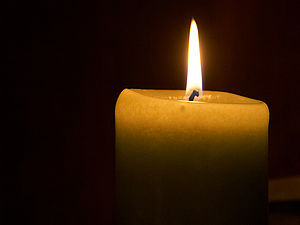 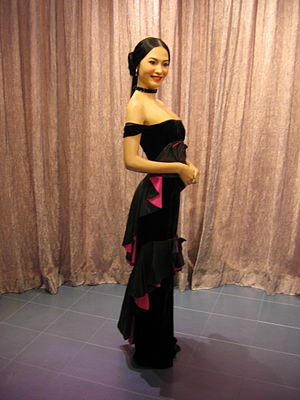 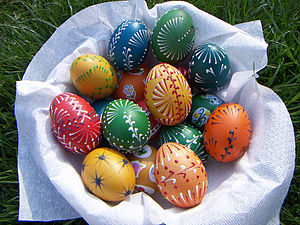 Wax-decorated Easter eggs as made in the Ukraine and the Czech Republic.

A lava lamp is a novelty item that contains wax melted from below by a bulb. The wax rises and falls in decorative, molten blobs.

Waxes are mainly consumed industrially as components of complex formulations, often for coatings.[3] The main use of polyethylene and polypropylene waxes is in the formulation of colourants for plastics. Waxes confer matting effects and wear resistance to paints. Polyethylene waxes are incorporated into inks in the form of dispersions to decrease friction. They are employed as release agents. They are also used as slip agents, e.g. in furniture, and corrosion resistance.

Waxes and hard fats such as tallow are used to make candles, used for lighting and decoration.

Waxes are used as finishes and coatings for wood products.[4] Beeswax is frequently used as a lubricant on drawer slides where wood to wood contact occurs.

Sealing wax was used to close important documents in the Middle Ages. Wax tablets were used as writing surfaces. There were different types of wax in the Middle Ages, namely four kinds of wax (Ragusan, Montenegro, Byzantine, and Bulgarian), "ordinary" waxes from Spain, Poland, and Riga, unrefined waxes and colored waxes (red, white, and green).[5][6] Waxes are used to make wax paper, impregnating and coating paper and card to waterproof it or make it resistant to staining, or to modify its surface properties. Waxes are also used in shoe polishes, wood polishes, and automotive polishes, as mold release agents in mold making, as a coating for many cheeses, and to waterproof leather and fabric. Wax has been used since antiquity as a temporary, removable model in lost-wax casting of gold, silver and other materials.

Wax with colorful pigments added has been used as a medium in encaustic painting, and is used today in the manufacture of crayons and colored pencils. Carbon paper, used for making duplicate typewritten documents was coated with carbon black suspended in wax, typically montan wax, but has largely been superseded by photocopiers and computer printers. In another context, lipstick and mascara are blends of various fats and waxes colored with pigments, and both beeswax and lanolin are used in other cosmetics. Ski wax is used in skiing and snowboarding. Also, the sports of surfing and skateboarding often use wax to enhance the performance.

Some waxes are considered food-safe and are used to coat wooden cutting boards and other items that come into contact with food. Beeswax or coloured synthetic wax is used to decorate Easter eggs in Ukraine, Poland, and the Czech Republic. Paraffin wax is used in making chocolate covered bon-bons. Wax is also used in wax bullets, which are used as simulation aids.